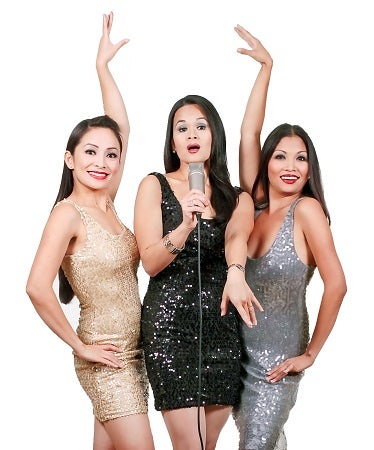 The show has been ongoing on stage since middle of February at the Aliw Theater, CCP Complex, Pasay City. Their final shows happen February 23, Saturday, 11 a.m. and 3 p.m. before they go back to London again.

The West End Mamas, which is making its Philippine debut, is composed of musical theater artists Gia Macuja-Atchison, Cez Campos-Bonner and Maya Barredo-Duffy.

The post-Valentine extravaganza promises to be an unforgettable evening of romance and celebration. In the tradition of the highly successful Ballet & Ballads series, this season-ender will feature a combination of Broadway and West End hit songs linked with highlights from Ballet Manila’s classical and neo-classical repertoire.

Dance and song fuse in such numbers as Dream Girls, Defying Gravity, the Webber Trio and the Mamma Mia Medley. Also not to be missed is the West End Mamas/ Ballet Manila Disco Medley comprised of Ain’t No Mountain High Enough, It’s Raining Men and Lady Marmalade.

“We are happy to welcome the West End Mamas in their first performance as a trio in their home country. We know they too are excited to perform for local audiences,” says Lisa Macuja-Elizalde, artistic director of Ballet Manila.

“Ballet & Ballads” also marks the return of Macuja-Elizalde to the stage after being sidelined for three months due to an ankle injury.

The West End Mamas has been described as “the most exciting act of their generation.” Their moniker is quite apt as all three “mamas” have played lead roles in smash hit musicals in London’s West End.

Macuja-Atchison was in the original cast of The Lion King for five years where she played Princess Nala. She also performed both the roles of Gigi and Ellen in the West End run of Miss Saigon.

Maya Barredo-Duffy performed as Kim in Miss Saigon for many years around the UK and in London’s Theatre Royal Drury Lane and was in the cast of The Lion King London. She also played Eponine in the Asian premiere of Les Miserables.

Cez Campos-Bonner has played Kim in Miss Saigon in Asia, Australia and Europe, including London’s West End run. She has also played Mabel in The Pirates of Penzance at London’s Savoy Theatre and the roles of Tuptim and Lady Thiang in The King and I.

For tickets and other inquiries, contact Ballet Manila at telephone numbers 525-5967 or 400-0292 or through the website www.balletmanila.com.ph or Ticketworld at 891-9999 or ticketworld.com.ph.