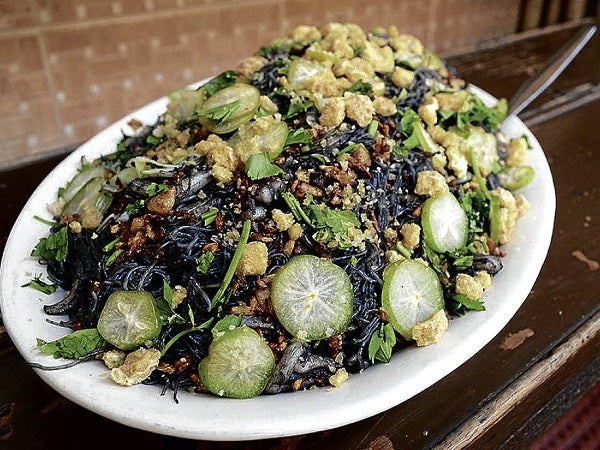 One way to persuade people to visit your province is to make it easy for the traveler to get there. For Cavite, it’s through Cavitex, the expressway that zooms you there and cuts travel by something like an hour. We bypassed what I used to call the hell highway, suffering through traffic every time we passed there.

Cavite City market was our first stop to catch the girl who was selling the quesillo, which is how kesong puti, or white cheese, is called there. There was still bulungan at one corner, wholesale bidding of fish done by whispering the price offered to the seller.

At another corner, lumpia wrappers were being cooked, the batter spread by hand on a rounded hot plate, its thinness determined by the cook’s experience.

In one stall, we had bibingkoy. For a few pesos, we had this rice cake, rice batter surrounding sweetened monggo, cooked then served with a sauce made of a mixture of sweetened coconut milk thickened with rice flour, and sweetened with langka  (jackfruit) and sago.

There were stalls that still sold American goods we used to call PX items once obtained from the now-closed American Sangley Point base, today the headquarters of the PN as Cavite natives call the Philippine Navy.

Our tour included revisiting Dizon Bakery, which once had a crowded glass display but now has much less bread and cookies.

The kenkoy, a rectangular cookie, was still there. And so was the sliced queso de bola that makes this Cavite bakery unique because it shows how people still like to have this imported edam cheese with their bread.

The sliced white bread is no longer labeled as Pullman, the way it was when the late owner, Amparo Dizon Bartolome, was running the bakery. She said then that the American cooks taught her staff how to do what we also call pan Amerikano.

Our guide was book designer Ige Ramos, who is finishing his book “Republic of Taste: Untold Stories of Cavite Cuisine.”

His winning essays in the Doreen Gamboa Fernandez Food Writing Award were on bacalao (dried salted cod) and haleyang sampaloc (tamarind jam), both cooked the way they do it in Cavite.

And he has been testing recipes at Asiong’s, the restaurant of Sonny Lua whose dishes are truly Caviteño (P. Paterno St., Caridad).

We were excited to be eating again at Asiong’s, named after Sonny’s father but where his mother’s recipes are cooked daily. He reminded me that this was the third time I have been to his place.

We looked hungrily as he brought in the pancit pusit, sotanghon noodles made black with squid ink garnished with chicharon (pork crackling) and sliced kamias (bilimbi) on top.

Fish sinigang sa miso was also done though the mustasa (mustard leaves) used was fermented (buro) instead of fresh leaves as we do it at home.

To complement our lunch we brought out the tamales bought at Ellen and Boy Robinson’s place. People mistakenly think that this very good Robinson tamales, full of peanuts and egg on top of the steamed rice base, can be bought at the Robinsons mall.

Throughout lunch, Sonny Lua wanted to share more than just the main courses. He brought out a side dish of fermented fish eggs that was eaten with the Cavite fish sauce called patis labo partly because of its intense flavor and its dark coloring.

Next, he brought out a bottle of sweetened small mangoes, the variety called biyuko, which you can put whole into your mouth, scraping out the flesh with your teeth so that what remains is the flat seed (buto). The biyuko is different from the supsupin, which is as small but has a more rounded seed.

Sonny said his mother used to make sweetened siniguelas (Spondias purpurea) as well. And Ige added that tomatoes were also sweetened and ended up looking like dried pomegranates. I could just imagine those.

Was sugar so cheap in Cavite at the time?

Ige said there were sugar plantations and mills called trapiche there, but all have disappeared, replaced by subdivisions. It’s a good thing the haleyang sampaloc of Ige’s essay is still being done and we were able to taste it, too.

Sonny Lua had more to share, this time his chicken pastel that he makes as filling for empanada, for those who can’t afford to buy the whole big order under a pastry blanket.

And as if we hadn’t had enough of Cavite specialties, Pearl de Guzman came all the way from Santa Rosa, Laguna, to bring her versions of ensaymada (e.g. ube, Nutella, speculoos). She continues the tradition of her late mother who ran Pat’s Bread and Pastries in Cavite City.

We ended our day with crisp pan de sal at Beruete’s Bakery with Arnel Beruete telling us about the huge breads of Cavite. And so, back through Cavitex and no dinner that evening.