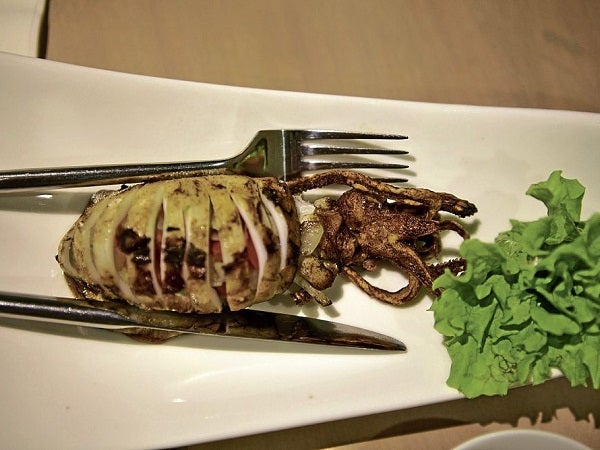 Korean discovery in BGC, and another resto hard to dislike

There is nothing left of the ghost-town feel about Bonifacio Global City (BGC), which is such a hive of activity these days, and where every few steps one stumbles on a new restaurant, if not first over one of the improbable dogs being pranced up and down the aisles.

What are Alaskan Malamutes doing in Manila? We pondered this question and eventually settled on the Korean restaurant Sariwon, at the far end of the long corridor of shops and activities.

We chose it because the neighboring restaurants were empty, but they could offer only either a table outside or sixth on the waiting list, and so like lemmings we joined the queue.

We opted for outside, so we didn’t get the full wonders of table-side cooking. But everything that emerged from inside was lovely: crunch and aroma from the well-tempered scallion pancakes that didn’t crumble like dried Elmer’s glue upon hitting the dipping sauce; Dak Galbi, grilled spicy chicken that came highly recommended; and the house specialty, bulgogi, that didn’t arrive, as it usually does, as scrunched-up shreds of beef on a hot plate—instead they were scrunched up in a bowl with soup, like sukiyaki beef.

Our ignorance about Korean cuisine is immense and can easily fill up one of those large, stainless-steel urns, like the hospital equipment they like to serve food in.

The truth is that we have great respect for Korean food, but unable to have a grip on it. Parts of it can be invigorating and interesting, while some aspects seem too mushy and fermented and strange for our uneducated palate to come to terms with.

But the food at Sariwon is so different from the it-was-so-spicy-I-can’t-remember-the-name dishes that we eat in our usual hangouts in the Korean sprawl behind Rockwell, that we have to wonder whether it turns out we’ve been eating really bad Korean food all these years, or if Sariwon is a kind of sanitized, mainstream-friendly version of the cuisine.

But despite our reservations about its authenticity, we heartily recommend booking a table here.

We’ve wanted to write about Pino for some time now. We had tried the original site off Maginhawa Street in hipsterville UP Village, Quezon City and found it something of an oasis of grown-up refinement in a rather “studenty” area, but it felt a tad too raw for a review, even if it had a philosophy.

You know how much we adore restaurants with a philosophy, not least making fun of them; but ultimately we respect a chef who has a grand architectonic behind the food he creates and serves.

Pino’s philosophical concepts are ones we can definitely get behind: Eating more vegetables (part of Pino’s menu is devoted to its vegetarian “sister” restaurant, Pipino, which in Makati actually shares its premises rather than being exiled upstairs), using local produce, doing something clever with classic Filipino recipes, and using Filipino ingredients in interesting new ways.

Pino has set up shop on Jupiter Street in Makati, and has transplanted not just its menu, but also its artsy vibe, its friendly prices, and even, it would seem, its clientele, who are hip and young and fresh-faced.

The food, by chef Ed Bugia, is the same as in its Quezon City location. We’ve been back several times and worked our way through the menu, and, as one would expect, there are hits and misses.

The hits call to mind Sau del Rosario’s Villa on Yakal Street on the other side of Makati; except that Mr. del Rosario would have done it better.

The misses make you feel that the chef’s reach has exceeded his grasp and that he is bending reality to fit his philosophy, rather than having his philosophy describe his reality.

And yet it is difficult to dislike this restaurant. A lot of this has to do with the very un-Makati prices, which make it a nice alternative to cooking at home.

But it also has a rakish, unkempt, earnest quality about it which is refreshing on this side of town, where almost everything and everyone is pretentious.

If you stick to the mainstays and popular items, such as the sisig tacos, the tofu and bagnet, and stay away from some truly terrifying inventions (and you will know what they are when you see them on the menu), then you can be assured of a pleasant, if not exceptional meal.

And by this we don’t mean to damn with faint praise, but to push Mr. Bugia to test not the limits of his philosophy or his creativity, but his prowess in the kitchen. If he can bring sophistication and technical discipline to the imaginative spark that was hatched on Maginhawa Street, this will be a restaurant Makati should be grateful to have.

Or perhaps we just have a soft spot for it because there isn’t yet another opening in the Fort, and there is not a single chihuahua in a handbag in sight.