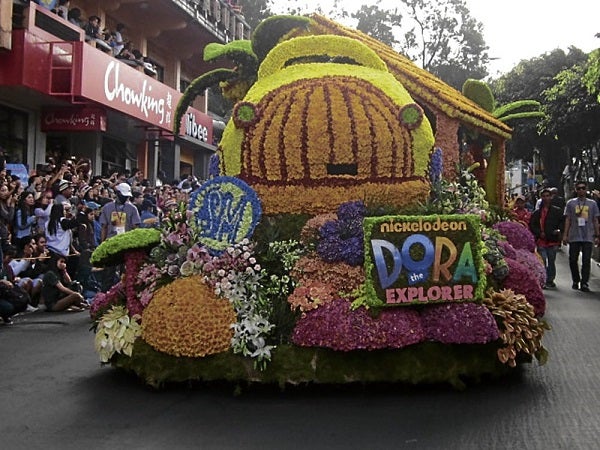 It is the time of year for Panagbenga— Baguio City’s annual flower festival—when  the city’s officials, civic leaders, residents and students link up, forget the problems of urban decay, informal settlers and eroded mountains, and produce a rousing show which has become a bestseller of the summer capital.

“You’re going to Panagbenga,” chuckled a friend who resides in Baguio. “All the hotels are full. Natives and residents of the city flee farther north or to the lowlands to escape the traffic, congestion, and the hordes of visitors on Session Road.”

Well, that sentiment may be understandable for Baguio denizens, but us visitors and domestic tourists want to see the much-hyped Panagbenga and what else Baguio has to offer. An invitation to media from The Manor and The Forest Lodge, A-listed hotels in Camp John Hay, Baguio’s leading tourist destination, made this possible.

Near the entrance to Camp John Hay, the bus carrying the national media was set upon by boisterous, unsmiling Kankana-ey youths, caparisoned in battle regalia and brandishing spears. The conniving driver opened the door and the braves entered single file, chanting and singing in the Kankana-ey language, the only familiar phrase being “ay ay Salidumay…” One  youth played the flute.

The “warriors” escorted us to the entrance or The Forest Lodge, where they were joined by Kankana-ey maidens in a celebratory war dance. Two braves dueled “to the death,” with the victor hoisting the vanquished on his shoulders.

It was a unique welcome to the Cordillera Administrative Region, land of the indigenous peoples.

On Upper Fairview Road, Quezon Hill, lies Mother’s Garden (74-424-3702), a kind of  hideaway which is a minibiodynamic farm, art gallery, café and zoo all rolled into one.

There are flower gardens, culinary and medicinal herbs, salad vegetables and fresh  vegetables daily (one pig sits down when commanded to do so), and they have fancy names like  Michelle (mother swine) and Hansel & Gretel (resident goats).

The resident wood carver, Jonny, an Ifugao, has been practicing his trade since the age of 11. And a Kankana-ey woman (Igorota) will demonstrate the traditional art of hand weaving. The topside café serves delicious pasta, sandwiches, roast pork and beef, soup and salad. At night you are treated to a fine view of Baguio with its lights, and you forget the houses constructed helter-skelter upon the mountainside.

The street dancing took place that morning, with the sun mercifully shining after an overcast day with drizzles (it was raining heavily in Metro Manila). Contingent after contingent sashayed through, with drums, lyres and bamboo instruments.

There were representatives from schools and civic organizations, sister cities from Korea and China, and tribes from the Cordilleras as well as Cagayan Valley (Nueva Vizcaya and Quirino). It was, by and large, a heady celebration of indigenous culture.

The main event the following day, the “Grand Float Parade,” was even more spectacular and extravagant, attracting mammoth crowds along the way. Police estimated that more than two million people lined the route.

Despite the presence of some mature persons (and celebrities like Robin Padilla, Bong Revilla, Daniel Matsunaga and Gary V. who, as usual, all stole the show), Panagbenga 2013, “the  blooming odyssey,” was a showcase of youth in parade.