‘Philippines has been a magic ride for Hermès’ | Inquirer Lifestyle ❮ ❯ 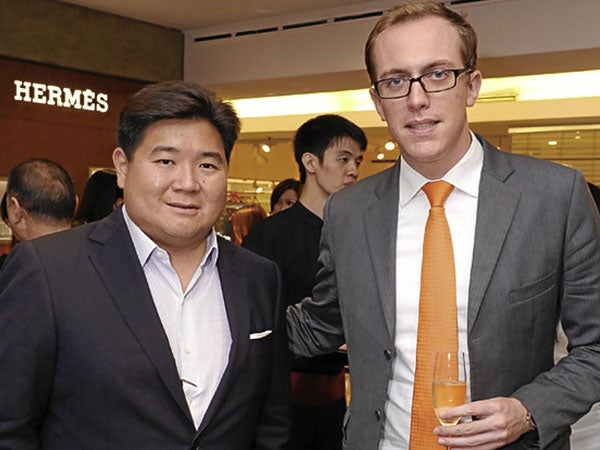 ‘Philippines has been a magic ride for Hermès’

Hermès timepieces don’t get the same fabled yearlong order list as the iconic Birkin handbag. However, La Montre Hermès, the Hermès division responsible for the watches, wishes it did—“but not too much.”

Even then, the watches from the historic company have no trouble attracting buyers in all markets, the Philippines included. The French house is still flushed at the brand’s unprecedented success in Manila nearly three years since the Hermès boutique opened in Greenbelt 3, Makati City.

Buoyed by this, the brand with its local distributor, Luxury Concepts Inc., just unveiled Hermès watch corners in two locations: at Rustan’s Makati’s Silver Vault and at Resorts World Manila. Another will open at Rustan’s Shangri-La. This is to cater to customers who are purely watch connoisseurs and who may have little interest in the other offerings in the boutique, says the company.

“The Philippines has been a magic ride for Hermès,” according to La Montre Hermès. (Per company policy, only the Hermès CEO and top management can be quoted in interviews.) “After a few weeks in Manila when we opened almost three years ago, we had nothing to sell anymore. It was such a success and we didn’t forecast it. It turned out the value of Hermès was a good match to the taste of the Philippine customer. The Filipino customer is advanced in taste and awareness.”

Explained simply, Arceau Time Suspended allows the wearer to push a button that, well, stops time. The date on the dial disappears and the hands go on so-called “impossible time, time that doesn’t make sense.”

Says La Montre Hermès, “It can be very romantic. If you just want to take a moment out of time, out of reality, to take time out of the equation. You just press a button. You can control time. Time shouldn’t be a stress generator. Then, when you wish to go back to reality, just push the same button and the watch goes back to the actual time.”

Cape Cod Grand Hours, meanwhile, is another demonstration of how Hermès manipulates time. Its mechanism allows for certain hours of the day to go by faster—or at least they appear to be—and some other hours to go by slow. It comes in three different dials with three sets of short and long hours “so you can choose which hours you want to run faster or longer.”

“This is for those moments when you want to savor time when, say, you’re spending time with your friends or your family or your spouse and you want time to move slowly. With the Grand Hours, time is relative.”

Both are gentlemen’s styles, but current trends have blurred that rule. Now women also wear larger, men’s style watches, according to the company.

The historic saddle maker began its leather trade in Paris in 1837, eventually graduating to making trunks and luggage. It wasn’t until 1928 that it started selling watches, first a pocket style called Ermeto. At the time, it partnered with prestigious watchmakers to create its watch movements. In 1978, the watch subsidiary La Montre Hermès was set up in Bienne, Switzerland.

Traditionally, Hermès was stronger with women’s watches. But it’s upbeat in getting the men’s market on the same level, creating interesting movements and complications that other, more established watchmakers aren’t doing.

“Others are making the same thing: chrono, calendar, moon face, tourbillion,” La Montre Hermès points out. “We never go against them. We do our own thing. We’re not going to try to be the most accurate or the most complicated. Our company is 174 years old. Our focus is to have the best quality customer. Our aim isn’t to go fast, but to have the best quality possible. Like our new complications, time isn’t a pressure that we have to fight. It’s a friend that gives us a chance to be better and to improve on our quality.”

The company is also quick to clarify that it’s not a “luxury” or a “fashion” brand but a “quality” one. However, style still comes into play in the watches owing to its fashion heritage.

The H-our and Kelly, inspired by the iconic bag, are two of the most popular women’s styles. Their watch straps are interchangeable and come in 10 different colors and skins, including crocodile and ostrich. Another favorite is the double tour (double strap) versions of the Kelly and Kelly 2, introduced in 1997 by then women’s wear creative director Martin Margiela. (Price starts at P85,000 for the Kelly 2.) The entire range is available in the Philippines.

“The common denominator in all products is craftsmanship and quality,” says the company. “The only thing is, the fashion and watch industries are different. In fashion, you come up with something every six months. In watches, the successful brands have had the same models for decades. You keep the same models and evolve. You don’t launch every year. You stay on your basic models, evolve with new complications, and come up with new sizes and colors.”

Says La Montre Hermès, “Hermès is not loud or too strongly branded. You are the one who will be enjoying it. Before the crisis, all the brands were ostentatious. Now they are switching back to more discreet luxury. And that’s what we’ve been doing all along.”

The company is run by the sixth-generation heirs of the founder and has remained solid in spite of reports of overtures by the conglomerate Louis Vuitton Moet Hennessy to take over. But the Hermès heirs, a Protestant family, are sticking by their Protestant values—that a euro is a euro one earns by the sweat on his forehead. They are said to be less tempted by money and have a rather ascetic approach to life.

“When your brand belongs to a family,” says La Montre Hermès, “it has two main concerns: The family wants to pass the company to the next generation in the best condition possible. In Hermès, the family is extremely involved in how it’s run. They respect the values of the brand. They put creativity, craftsmanship and quality forward. It’s a long-term goal.”