Chilling on Charm and the peanuts | Inquirer Lifestyle 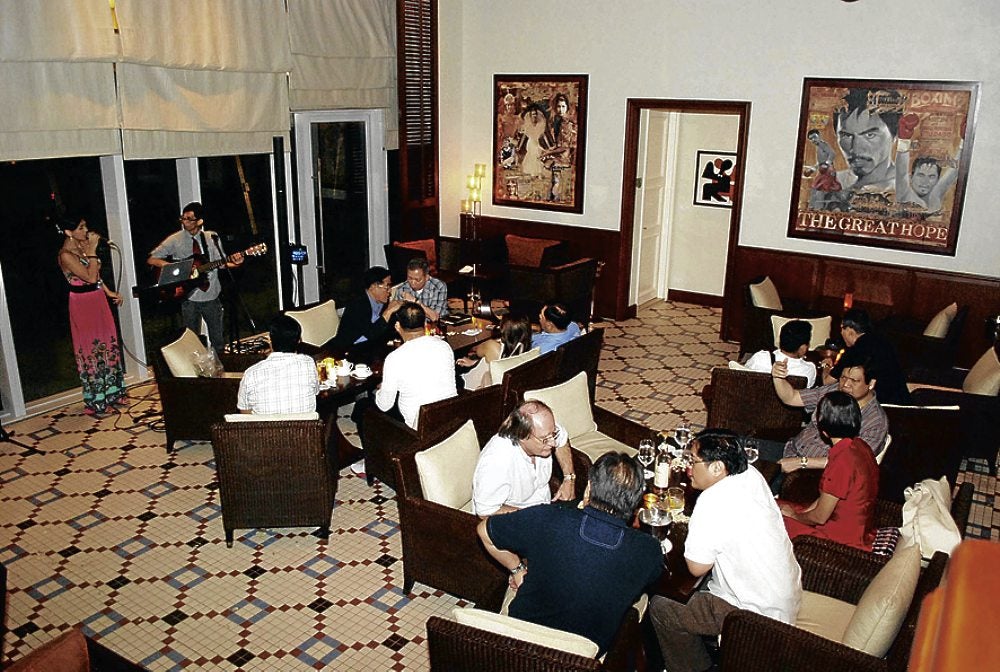 Chilling on Charm and the peanuts

Two things strike us the first time we visit Long Bar at the newly opened Raffles in Makati on a late Friday night: the versatility of the female singer, and the scattered peanut shells on the floor.

Charm Garcia sings a few radio-pop covers, before she catches our attention with her rendition of George Harrison’s “While My Guitar Gently Weeps.”

Charm looks too young to be aware of that classic rock tune the Beatles recorded in their 1968 “White Album,” although she might have first heard it via Karen Mok, the Hong Kong-based singer-songwriter who recorded a chillout version of the song recently.

We join friends who are here also for the first time; all of them are munching on boiled peanuts, whose shells they casually drop on the floor. It’s a tradition, one of our friends whisper, “so don’t call the waiter to sweep them away.”

The place is quite full, and the guests are engaged in animated talk. A friend is treating us for drinks, so we order Chilean red wine. After two glasses we feel woozy but still able to enjoy Charm’s last few songs.

A couple of Fridays later we are back at Long Bar, this time with Serafin Pua, who operated the legendary Quezon City jazz clubs Birds of the Same Feather in the late 1970s, and Birdland in the late ’80s.

“Hey, this is like being in Singapore,” Serafin says, noting that “the long bar” behind us looks exactly like the original at Raffles Hotel Singapore on 1 Beach Road.

Lawyer Katrina Legarda stands up from her seat, very glad to see some long-lost friends: “It’s been a long time since Giraffe days!”

Business executives Noel Oñate and Bubut Quicho are also in the house, as well as jewelry designer and former model Joyce Oreña.

At one corner (there seems to be no elevated stage yet for featured performers), Charm is singing Sean Kingston’s “Beautiful Girls.” She follows it up with the Kenny Loggins hit “For the First Time.”

Turns out that Charm— whose real name is Maria Rosario—is only 21, but she has been singing for a good number of years. “It’s my first time to perform regularly in Manila this year because I’m always abroad,” she tells Inquirer Lifestyle.

She spent three years in Hong Kong, singing in several hotels including The Peninsula, Conrad, Stanford and Lan Kwai Fong.

The second of three siblings, Charm actually started out as a dancer on the TV show “Keep on Dancing.” But she realized she wanted to be a singer, and singing became her bread and butter. On the side she has a garment business.

She performs four nights a week. “I love it,” she says, adding that her repertoire has been expanding because of various requests from her audience.

As Charm talks to us, her guitarist, Dan Cerenado, sings a couple of folk-rock classics, Poco’s “Crazy Love” and James Taylor’s “Fire and Rain.” The mood gets cozier; we order San Mig Light.

Serafin doesn’t want to drink and is just content nibbling on the peanuts. “I like the vibe here,” he says, pointing to the pop-art paintings of various icons including Charlie Chaplin, Maria Kalaw and Manny Pacquiao, all done by Cebu-based French artist Delphine Delorme.

When Charm returns to sing, we notice that Long Bar’s backdrop needs a little improvement. A big, brightly-lit JRS Express billboard outside Raffles distracts the view of the performers by the glass wall. Not only is there no stage, the lighting is also too dark.

But Charm is such an enchanting singer that we ignore the visual inconvenience to listen intently to her next numbers: “Officially Missing You,” “Forevermore,” “How Did You Know,” “Rolling in the Deep.”

Charm has a way of putting her own mark on these covers—she doesn’t really give them a new spin, it’s just that her voice has its own identity.

It is now past 1 a.m. We’ve had our fill of good music in a new place that offers a replica of its original Singapore location. The two San Mig Lights cost us P500. Next time, we plan to order Long Bar’s signature drink, the Singapore Sling.