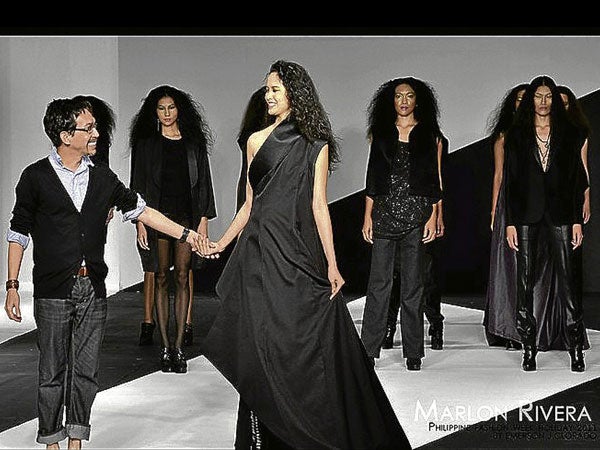 “Do you ever Google yourself?”

“No.” Marlon Rivera looks up from his computer, seemingly amused at the question.

We are sitting in his office at Publicis Manila, the advertising firm where he is president and chief operating officer.

Seconds later, he is typing his name into the search bar. “May basketball player, o. Men’s basketball. In fairness.”

Then he sees the results that refer to him. There are many. “The first thing that comes out is fashion. On the second page, cinema starts to come out.”

You can’t blame the search engine for being overwhelmed. There is a lot to be written about Rivera.

When he says fashion, he refers to his clothing line MNR which he launched during Fashion Week three years ago. “I do two collections a year,” Rivera says. He is also creative director

of Folded and Hung.

“We were not hoping for Best Film and Best Director. I was just hoping for Audience Choice. But a few seconds before it was announced, I wanted it because they said that the winner would get a Canon 5D. And then I won.”

“Ang Babae Sa Septic Tank” is the second project of Martinez Rivera Films, the company Chris Martinez and Rivera put up in 2008. Their first project, “100,” which Martinez wrote and directed and Rivera produced, also won awards and made rounds in the international film festival circuit.

“The agreement was I was going to direct the second film. We wanted to do it two years after ‘100,’ but Chris became famous with ‘Kimmy Dora,’ ‘Here Comes The Bride,’ and of course ‘Temptation Island.’ When the deadline for this year’s Cinemalaya was approaching, I said, ‘Chris, let’s do the script na.’ Sabi niya, ikaw na yung director. We were worried Cinemalaya would not allow me to direct because they need proof of a short or any other work you’ve done previously, but I didn’t have any of those things.”

Rivera may have been new at directing movies, but he was far from unprepared. “I’ve been in the commercials world for a long time. I’ve been to shoots and I’ve been a producer and assistant director. I know how to train, I know how to motivate actors, block actors, I understand the technicals. I directed theater and concerts so I understand. And I do direct and manage 170 people here.”

Martinez had no doubt Rivera would do justice to his script. The two have been friends for a long time—in fact, it was Rivera who gave Martinez his first job out of college, as copywriter for Basic Advertising, one of the first incarnations of Publicis.

Together they worked on ad campaigns such as Eskinol Master’s “Sikreto Ng Mga Guwapo.” Martinez said, “Before we started, I told Marlon, ‘I will make you the Tom Ford of the Philippines.’ Na-achieve naman niya! And more! Si Tom Ford walang best director award, si Marlon meron! Hahaha!”

The movie opened in theaters last Wednesday and has been doing well. Every hour, Rivera receives updates from his co-producers. “Trinoma report. They’re running very well,” he says, checking his phone. “Kris Aquino texted me to say she watched it. It made my day.”

He says he’d love to do a fashion parody. “It would be nice to ask all your friends to cameo, the Mark Nicdaos, sila Anne, sila Liz, lahat ng makeup artist, with a Joey Gosiengfiao-style script. I think there are valid stories in the world that are not contexted in poverty.”

He’s also been teaching Visual Verbal Communications at the University of the Philippines since 2003, but had to go on leave this year. He says he plans to go back. “Teaching is one of the most wonderful things you can do for yourself as a human being.”

Marlon enjoys doing new things and has no qualms embracing new passions. In fact, 10 years into his career in advertising, he quit his job as vice president of his company to become a makeup artist.

“I just decided to retire and become a beautician. For two years in the ‘90s, I was working in advertising, but from Fridays to Saturdays, I was counter girl at Rustan’s. I would stand at the Estee Lauder counter from 2 p.m. until closing time and do makeup and product demos. I received my commission in gift certificates and would go home with pots and pans and groceries in the car for my mom.

“Juan Sarte, who was a caster, and I would go to the casting department and coerce the women to let us do their makeup for VTR. Then, me, Juan Sarte, Ting Duque, Jing Monis, we put up the Propaganda team.”

He eventually returned to advertising, on the condition that “they allow me do the things I do.”

Rivera also studied production design, put up Malate resto favorite Pepe and Pilar, did a lot of theater work, and now sits on the board of trustees of the Philippine Educational Theater Association (Peta).

Rivera says his many passions do not overwhelm him. When asked to choose just one of the things he does, he says, “There’s an error in the question. I’m not the only one doing this. There are a lot of people who are doing a lot of things. My friends and I talked about it. It’s not a prescription for anyone.

“Some people thrive on doing one thing, and they’re great at it, and there’s nothing wrong with that. But there are people like us who will get bored if we do only one thing.”

It is his love for life and creating that keeps him going. “The fundamental threading principle that brings everything I do together is, I love seeing things happen. I’m a sucker for learning.”

There are still a lot of things he wants to do. “I really want to publish a book of poetry eventually. I’ve been writing since school. I’ve always wanted to exhibit because I also paint. But these things are personal, so I want to do them in my own time.”

He says his childhood as the son of a civil engineer who constantly had to move his family around to where the projects were helped him become a multi-tasker. “I went to so many schools, from Mindanao to Bulacan. My father was a civil engineer so we moved to where the projects were. You learn to adapt really really quickly. And you get to reinvent yourself every time.”

Rivera says the secret to multi-tasking is not multi-tasking. “People always say, ‘How can you do all these things all at once?’ That’s the trick, you don’t do these things all at once. You’re not supposed to. When you’re teaching a class, you’re not thinking flowers, you focus on the kids. When I’m thinking of my table setting, I cannot be bothered about children or education. You just do what you need to do at a given time. You don’t fret about bukas or the next schedule.”

He also makes sure he has time to relax. “I enjoy being alone. My most favorite activities in life are a hot shower and going to sleep.”

He also likes spending time with his friends. “We have dinner regularly. I have a younger set of friends, and we meet for lunch and tea. I have two great circles of friends.”

He’s not a big fan of partying. “I’d rather play mahjong on a Sunday afternoon,” he says. He also enjoys going to his home in Mt. Arayat, Pampanga. “We call it Villa Pretensiosa. It’s a house in the middle of a mountain with a fireplace. It looks like an Italian farmhouse.”

Rivera’s list of must-haves are simple. “I can’t live without rice, coffee and hot showers. Solb solb na yun, no! And my phone and the Internet. I’m lucky I didn’t develop a taste for complicated things. Madali akong paligayahin. It leaves you more time to think of other things if the basic things in your life are quite simple.”

Marlon is looking at a beach property in Zambales so he could build a small house and his coveted 12- or 16-ft dory boat. “My friends will go, ‘Nice naman your boat. Where did you get it?’ ‘I built it.’ Ang saya, di ba?”