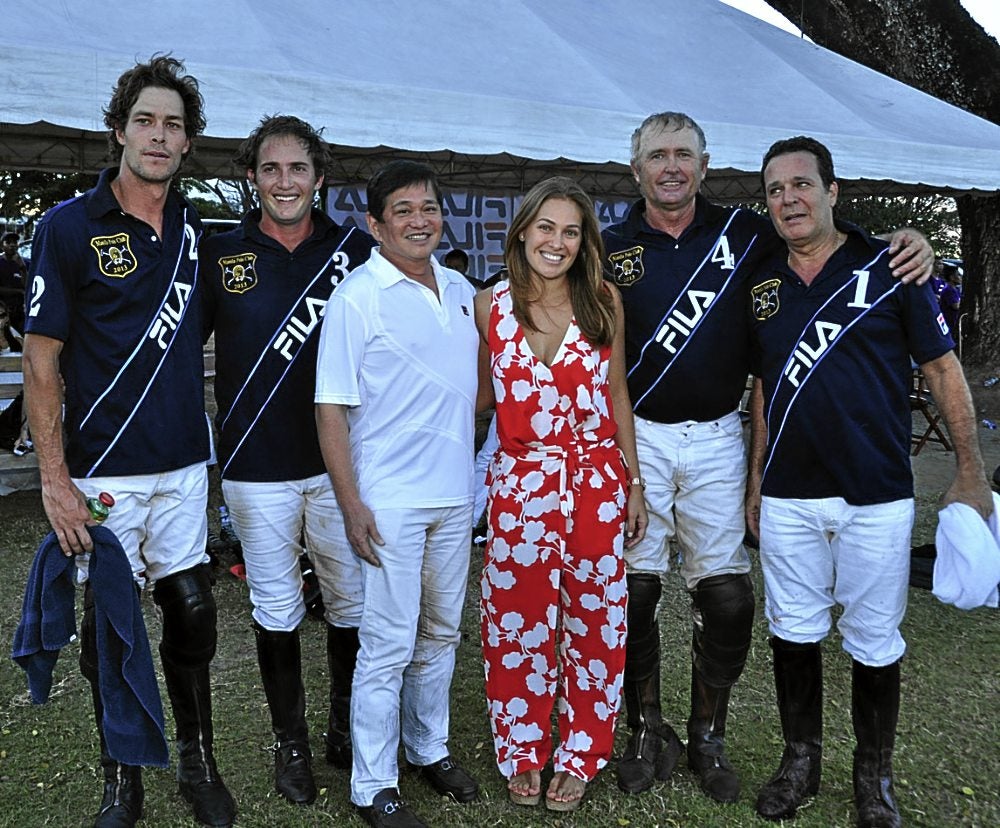 The 2013 Fila Polo Cup at the Manila Polo Club in Forbes Park was more colorful than ever because of its unique theme, “Brazilian Carnival!”

Leading the Fila officialdom present were president and CEO of Fila Philippines, Cris Albert, and husband, chair Butch Albert, who was marking his birthday on the polo field that day, palanggas.

Astroboy had everyone amazed with his fiery display of fierceness. No wonder he is Manille’s premiere hoop artist and “Talentadong Pinoy” Grand Champion.

“Why a Brazilian carnival”? moi asked Cris A. “Merely because when it comes to emotion, color, atmosphere, and sheer over-the-top joyous celebration, there’s nothing that beats the Brazilian method and rhythm. This is a perfect welcome for Fila’s bigger direction in 2013, which has stayed true to boldness, color and design,” said the chic Cris, as she sipped her chilled flute of Dom Perrignom, dahlings.

The Rio de Janeiro-style Mardi Gras performing at the polo field sent the men and the young-at-heart rushing up front to get a 3D view of the women dancers. Wow!

The carnival was capped by kaleidoscopic fireworks.

All in all, some 800 guests enjoyed the night. That’s Fila for you, dahlings.

Somehow I enjoy Chinese New Year’s Eve more than the traditional New Year’s Eve. And this year was no exception when the elegant Mandarin Oriental Manila held the grandest lunar new year bash outside of Binondo with the 17th edition of its lunar fest welcoming the “Year of the Water Snake.”

Colorful ceremonies followed outside the hotel, at the corner of Makati Avenue and Paseo de Roxas, where Master Joseph Chau performed the Paai-Shan ceremony.

Enchanted Kingdom fireworks lighted up the sky at midnight, as guests witnessed the awesome video projection of a colorful snake slithering down the column of the hotel’s exterior, would you believe?

Après gorging all that after midnight, it was time to party some more and burn out all that calories, dahlings.

The fifth building within the Acqua Private Residences, a 2.4-ha property on Coronado Street,  Mandaluyong, was recently inaugurated.

Breezing around, moi noticed Iguazu has a breathtaking multilevel amenity deck called the Cielo, and common areas that have the unmistakable imprint of Yoo, the design firm founded by top design mind Philippe Starck, natch.

British real-estate magnate John Hitchcox said in his welcome speech: “Because these spaces will be home to a lot of people, we have made our creations unique and very special. You have the privilege to see them now at the Iguazu showroom.”

“I am so very proud to present the first Yoo-inspired, Starck-designed building in your beautiful country and I am so delighted to be a part of this very exciting project,” said a smiling Philippe Starck in a video message.

Because of their exclusivity and design, the units were grabbed and reserved on the spot faster than one could bat an eyelash. Iguazu buyers were rewarded when they brought home Philippe Starck branded gifts as souvenirs. (Visit www.acqua-iguazu.com.)