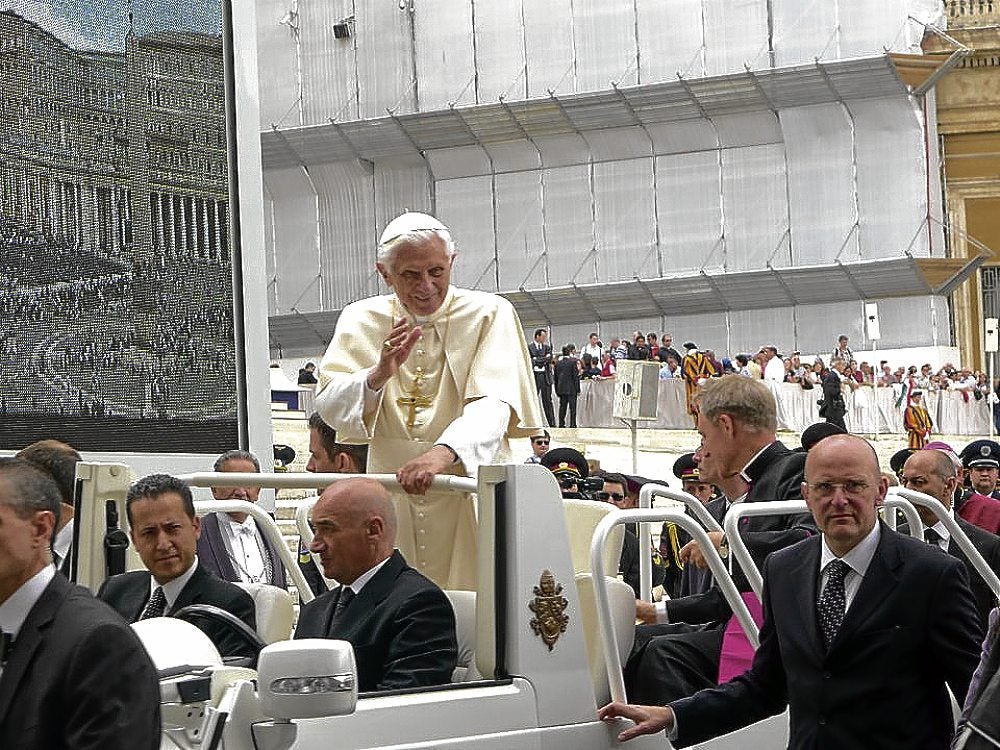 Just like the billions of Catholics around the world, I was stunned when TV news flashed the report that Pope Benedict XVI had decided to “renounce his Petrine ministry” because of failing health.

I admit that after Blessed John Paul II, whom the Filipinos have come to love, Joseph Ratzinger came in 2005 when I wasn’t ready to love a new pope. So call it serendipity or a subconscious effort to know the man—or simply unexpected blessings—I was able to encounter Pope Benedict XVI on three occasions during his papacy.

On those three occasions, I encountered different sides of Pope Benedict XVI that will eventually mark significant moments in my life.

Pope Benedict XVI is a pope who cares for the youth.

It was the dead of winter in Australia. But the Randwick Racetrack in New South Wales was bustling with energy and life. It was the vigil of the 23rd World Youth Day, and I was part of the media group.

Young people from all over the world, accompanied by religious superiors, had embarked on a 10-km pilgrimage walk over the Sydney Harbor Bridge and across the city for an overnight vigil at the racetrack.

While I was quite comfortable, warm and protected from the bitter cold in the media quarters, which had free hot food and drinks, the delegation of the Diocese of Cubao (which included my daughter) slept in open air on the freezing racetrack and passed along cold bread, biscuits, chocolate bars, meat pies, lamingtons and canned goods.

Some of the kids even volunteered to distribute the food to  other delegations just so they could get the empty cartons and use these to line the ground against the cold.

But while the atmosphere in the warm media booth was primarily business and jockeying for  best vantage points, the feeling among the 400,000 youth delegations camped under the winter sky was upbeat, warm and highly charged with anticipation.

When Pope Benedict XVI finally appeared for the vigil, the area erupted with cheers and chants of “Be-ne-det-to, we love you!” It was even more touching realizing that here was the Pope who, a few hours earlier, at St. Mary’s Cathedral, made a historic apology for child sex abuse by priests and clergymen.

Pope Benedict XVI said, “I am deeply sorry for the pain and suffering the victims have endured and I assure them, that, as their pastor, I too share in their suffering. Victims should receive compassion and care, and those responsible for these evils must be brought to justice.”

Although visibly feeling cold, Pope Benedict XVI must have been warmed by the enthusiastic response of the young; he acknowledged their cheers several times. He gamely watched the presentations of the aborigines, chanted with the youth and prayed the rosary with them.

He left after the rosary and returned the next day for early morning Mass. An unexpected bonus for the Filipino delegation happened when his entourage suddenly changed the route, and the Pinoys found themselves only a few feet away from Pope Benedict XVI, who was waving at them from his popemobile!

Yes, in his reserved, almost shy but charming ways, I saw Pope Benedict XVI captivate the hearts of the young. He cared for them deeply. And he must have had received a power dose of energy from the Holy Spirit because World Youth Day 2008 was indeed a great and unforgettable festival of faith that would have challenged the vigor of a much younger pontiff.

Fast forward to four years. My kids are all grown up and I finally had some “me” time. I decided to join a Marian pilgrimage with Journeys of Faith, with a Rome stopover.

I found out, however, that the stop in Rome would not fall on the day of the Pope’s regular Wednesday general audience. But with the help of Ambassador Henrietta de Villa, I got my ticket for the papal audience. All I needed was to muster the guts to travel alone by train and enter Rome a day ahead of my group.

I’m glad I did. A week before the “butler scandal” erupted, I saw Pope Benedict XVI up-close for the second time. Under the scorching Italian morning sun, and waving my little Philippine flag, I tried to find a place near enough to see the Pope. All of the seats in my section on the platform were occupied.

Suddenly, out of nowhere, a lady motioned for me to sit beside her. Blessing number 1! I found myself sandwiched between this lady (who turned out to be from Nigeria) and a Norwegian family. Sensing my difficulty at trying to take pictures of myself, the Norwegian lady offered to help take my photos.

When the Pope did his “roll call” of nations and called out “Philippines!” ever so fondly, my instant international family clapped loudly and cheered for my country. Touching moment. Although I was alone in Rome, it was one moment I felt I really belonged to a bigger community of the faithful.

It was also on this occasion that I saw a visibly weakened pontiff. He still acknowledged the cheers of the people, but I noticed that his popemobile brought him so close to the movable stage so that he could take as few steps as possible.

I took a break at the quarters of the Order of Malta to take my meds and a drink of cold water. My blood pressure was creeping up because of the midmorning heat. The people there shared their observation on the Pope’s visibly deteriorating health. These were the volunteers who saw him almost every Wednesday.

When I asked permission to return to my place for the Pope’s final blessing, they prevented me and authoritatively barked, “Sit! He will pass here!” I was skeptical.

I’m glad I did. Right after the blessing, the Pope did pass by our area. I could not believe my eyes when I saw the popemobile making a U-turn toward my direction on its way out of the square. Fumbling with my cameras, I caught that precious moment both in video and stills. What a blessing.

Even then, I felt a tinge of sadness, because I could clearly see how his clothes were loosely hanging around his body and how frail he looked. Here was a Pope who suffered in silence and strove to be with the faithful despite his failing health.

Upon the invitation of Journeys of Faith, I had an opportunity to attend a Mass of Pope Benedict XVI for a second time last year. This time, I was with the Marian group of Fr. Manoling Francisco, SJ.

We were in Rome for the canonization of the Philippines’ second saint, Pedro Calungsod. In his homily, Pope Benedict XVI said, “Pedro displayed deep faith and charity and continued to catechize his many converts, giving witness to Christ by a life of purity and dedication to the Gospel… May the example and courageous witness of Pedro Calungsod inspire the dear people of the Philippines to announce the Kingdom bravely and to win souls for God!”

It was no secret that just like his predecessor, Pope Benedict XVI really holds the Filipinos dear to his heart. And in the huge gathering of Filipinos in Rome last October, it was plain to see that the feeling was mutual.

During the canonization of the seven Blesseds, I saw a pontiff who really loved the Filipinos and yearned to invigorate the faithful to inspire them to live their lives for God.

Pope Benedict XVI has ended his papacy. There will be another pope to continue the Petrine ministry. In my life, I have seen five popes (John XXIII, Paul VI, John Paul I, John Paul II, Benedict XVI) and will soon know another by Easter. I pray that the next pope we will journey with will inspire as much as Benedetto XVI.

My encounters with Pope Benedict XVI were pilgrimages of the heart through the Journeys of Faith.