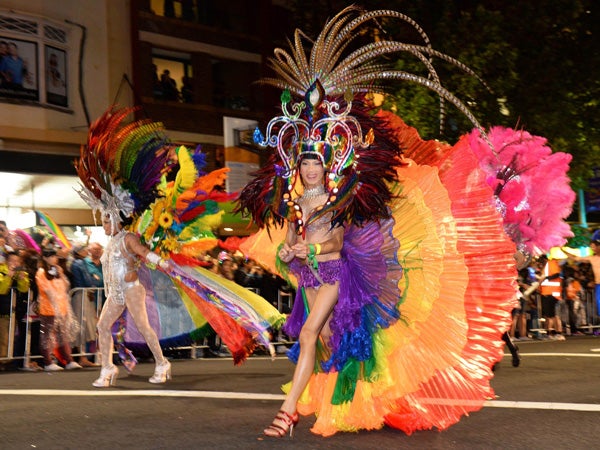 Performers march in Sydney's annual Mardi Gras gay pride parade, an event which bills itself as the world's biggest night parade, on March 2, 2013. The Mardi Gras is in its 35th year and is celebrating the theme "Generations of Love", focused on its origins as a gay rights protest march that ended with violence and arrests. Some 10,000 revellers on 115 individual floats made the journey down Oxford Street, hub of Sydney's gay and lesbian nightlife, in a vibrant show featuring drag queens, political parodies and plenty of sparkle. AFP/WILLIAM WEST

SYDNEY — Drag queens and scantily-dressed dancers joined with politicians and military personnel for Sydney’s colourful gay and lesbian Mardi Gras, and to call for acceptance and equality.

Gloomy weather failed to dampen the celebration Saturday night, which exploded in a profusion of lights, dancing and music for its 35th anniversary event along Oxford Street, the hub of Sydney’s gay and lesbian nightlife.

More than 9,000 revellers on 108 floats took part in the event which bills itself as the world’s biggest night parade, while organisers said 300,000 watched the glitzy spectacle which has its origins in a 1978 protest march.

This year the event was dedicated to those “78ers” who took part in that first march which ended in violence and arrests, and some of the original activists took pride of place at the head of the parade.

“Last night’s parade was a cheeky, colourful, irreverent and fun as Sydney expects it to be,” said Mardi Gras chief executive Michael Rolik.

Sydney’s irreverent Gay and Lesbian Mardi Gras is a major tourist drawcard for the city, bringing Aus$30 million ($30 million) into the economy for the city’s largest event behind the New Year’s Eve fireworks.

For the first time, gay members of the Australian Defence Force (ADF) marched in their uniforms for the parade which was hit by cooler temperatures and occasional sprinklings of rain.

“It’s absolutely exhilarating. This is about us being proud of the uniform, and it allows us to show how proud we are of the ADF,” Squadron Leader Vince Chong from the Royal Australian Air Force said.

Iconic Australian surf lifesavers were also part of the parade which was opened by the Dykes on Bikes motorcyclists who have been participating in the street party for 25 years.

“The message is that the lifesaver is for everybody, gay, straight, bisexual, whoever,” said parade participant Grant Beaumont.

“Life saving is very inclusive and you know, we are very proud to be part of the gay community, we love coming to Mardi Gras every year, and being on the show. We just love it.”

The parade had a political flavour in election year in Australia, with many calling for gay marriage to be legalised Down Under, while politicians were also represented, among them Greens leader Christine Milne who marched with other parents with gay children.

“Sydney Mardi Gras is well known as a good time, but it’s so much more than a street parade,” said Mardi Gras co-chair Peter Urmson.

“It’s what we do to continue the struggle against discrimination and inequality as it impacts on lesbian, gay, bisexual, transgender, queer and intersex people.”

But for thousands of others, the parade is an excuse to enjoy the spectacle and support the gay community, whether they are part of it or not.

“For the (gay) community, it’s a really important… to show that we are not hiding… We are proud of who we are,” onlooker Gary Aschmoneit said.

Italian tourist Alessandro Macali said he enjoyed the parade which police said this year had ended with significantly fewer arrests and incidents than previous years.