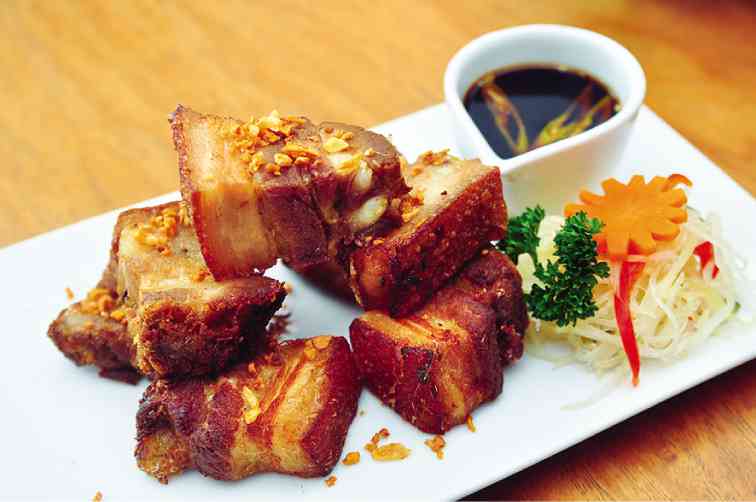 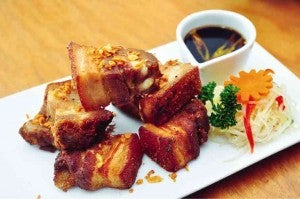 Myke “Tatung” Sarthou finds it hard to say no to people. When he started cooking—borne out of passion and family history than a formal education—for friends at his home in Quezon City, splendid tales of his dishes spread like wildfire, chiefly among acquaintances, and later, ladies who lunch, politicians, power players and, soon, strangers.

“I’ve had a guy—I did not know him—who wanted to surprise his date with a romantic dinner,” said chef Tatung on a bright Sunday morning. “I felt I had no choice but to open my home to him. Then, another one texted, checking if I could accommodate his party; I said yes to that, too. Eventually, it snowballed; by evening, our house was full to capacity with diners. The cops even thought I was running some sort of gambling house since it was always so busy at night!”

Outside his green gate, a slew of cars began regularly lining the street that his neighbors in the subdivision started complaining.

Chef Tatung has since moved to the sprawling Acacia Estates in Taguig, a 10-minute drive from Bonifacio Global City under normal traffic. The restaurant, named after him, sits beside a bamboo grove, the view of which may be enjoyed from its spacious patio.

Beyond the thicket, a creek produces an ambient sound and, with the rustic smell, evokes summer memories in the province. (Younger patrons raised in the city may find the aroma peculiar, to say the least.)

The challenge in serving Filipino cuisine is that we have no standard criteria for it other than the practical, which is to please one’s palate. The benchmark by which we judge Filipino food is based on how our own grandmother, mother or tito made it: Sentimentality overrides regulation, which makes it a veritable free-for-all. 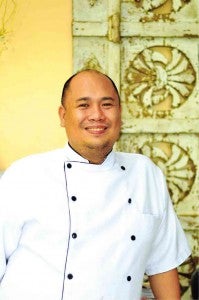 “Take adobo, for example,” chef Tatung said. “We have different types, based on the region or province: adobong Cebu is dry, cooked in vinegar until the fat renders and slow-cooks in its own lard—it looks like lechon kawali but tastes like adobo, crunchy but it melts in your mouth; Batangas adobo uses turmeric instead of soy sauce, so it’s yellow; and adobong Ilonggo is spiced with achuete and extended with chicken liver.”

Chef Tatung succeeds by being true to the dish. His adobo is how we know it to be, no matter the nuanced differences from our own heirloom recipes. The mild sourness kicks in immediately, just as the sweet-salty flavors provide a bold taste to the dish.

More importantly, the meat is firm and yet melts in your mouth, a technical achievement which not many cooks in our respective families are able to reach.

For good measure, the restaurant serves all three adobo types, plus a fourth, to cater to his patrons’ diverse cravings: lengua adobo. Ox tongue is given a twist in this playful dish that is drizzled with extra virgin olive oil and garnished with green olives and roasted garlic.

The flavors remained authentically adobo, and this dish made us see his point of view:  Inventiveness may go as far as recreating a classic dish but without compromising its soul.

Chef Tatung said he sources ingredients locally and would create dishes based on what’s available in the market. This is the reason he prefers, for example, not to fax the menu in advance when he caters private events.

He also prefers perfecting a dish in its purest and conventional form, rather than experiment with, say, fusion food. His palate can be very exacting: According to the chef, he has yet to make an excellent paksiw, one that skillfully balances the sour note of vinegar that it’s known for. 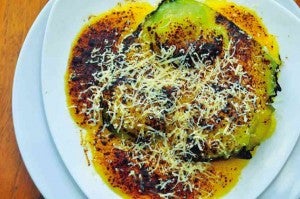 His slow-roasted lechon belly is a charming dish, as the pork sitting on a bed of garlic and lemongrass glistens with honey, perhaps as a nod to our Chinese influences. Again, the meat practically dissolves by itself in your mouth, and it’s hardly surprising—according to the menu, this dish is roasted in a brick oven for six hours.

Another tedious dish to make is the chef-recommended balbacua, a soup that originated in Cebu, Tatung’s home province. Stewed for over eight hours, the ox trotter and kneecaps turn succulent and are made complex by the tandem of ginger, star anise, black beans and peanuts.

The result is a rich broth with an intense yet comforting aroma, and a hearty meal that reminds one of home, even if not from Cebu.

For dessert, we were served pichi-pichi, a gelatinous cake made from cassava with grated coconut. Chef Tatung recalled how a friend went to his restaurant to try them, doubting it could beat what the latter considered as the best pichi-pichi from a local Filipino catering restaurant for which it is known. The verdict: Chef Tatung’s, hands down.

We knew about the pichi-pichi the friend was referring to; it’s an office favorite. However, true enough, Chef Tatung’s version is in a league of its own. The pandan-flavored cassava tastes luxurious with its custard sauce and generous crust of quezo de bola brûlée.

It was a glorious end to lunch.  Jason Doplito, Philippine Daily Inquirer, Contributor

Why you should bring your family to this buffet

We were raised to reserve Sundays for God and family. At Chef Tatung, Sunday is very popular among families who go there for a hearty buffet lunch.

The constantly evolving spread consists of traditional Pinoy favorites with its star mainstay: Cebu lechon (the pig is freshly roasted in the morning before being served).

Apart from the usual suspects, chef Tatung incorporates regional specialties in the spread, like Cebuano-style balbacua, a stew made with ox trotters; and Bicolano dinuguan made with gata (coconut milk)—the way his grandmother used to make it.

At only P650 a head, it’s essential to make reservations for the lunch buffet since the place easily fills up; it’s not unusual to see a family of 20 enjoying the fare.

Despite his busy schedule running the restaurant and occasionally catering private parties, chef Tatung makes sure he’s always at the helm of the Sunday buffet.

“I cook some of the dishes, and when I have the time, I like going to the market personally for the buffet. It’s when I get to see seasonal ingredients and I’m inspired to incorporate these into the buffet,” he said.

The restaurant’s homey ambiance invites one to linger after the meal. During our visit, a family who had finished dining moved to the al fresco area to chat some more while a birthday celebrant opened presents. Chef Tatung even puts lounge chairs facing the creek for people who’d like to take a post-meal nap.