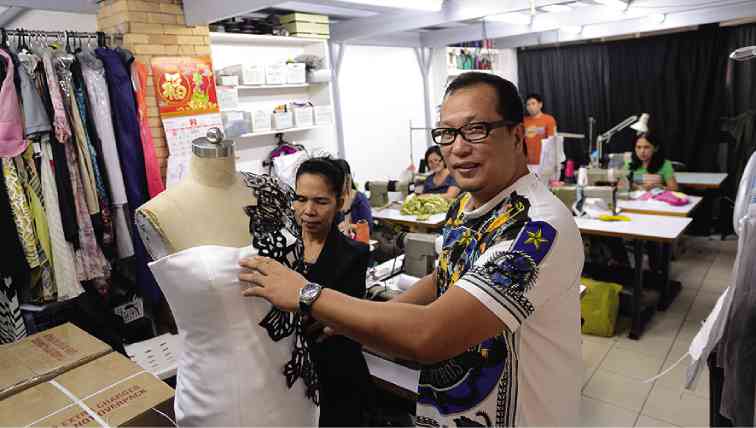 The clean, modernist and minimalist lines are still there. So is the neutral color scheme found on walls, floors and ceiling that combines eggshell and lead gray.

But instead of going for a dim, spacious and homey interior like he did before, fashion designer Noel Crisostomo opted for a smaller but brighter and no-frills receiving area when he made the big move late last year to a new shop, also in Makati City.

A veteran of the Toronto fashion scene, the Filipino-Canadian Crisostomo also worked for some of the biggest retail companies abroad, such as Club Monaco and Shanghai-based Ports 1961, before trying his luck in Manila in 2008.

In no time at all, the Ryerson University-educated Crisostomo became one of the favorite go-to guys of local celebrities and fashionistas. More recently, the designer was tapped by iconic retail brand Collezione as creative director for its men’s and women’s ready-to-wear line.

Crisostomo now divides his time between his Makati shop at 8862 Sampaloc St., San Antonio Village (tel. no. 0917-8001622) and Collezione’s Pasig office. His previous shop on Vito Cruz Street, he says, was a product of its time. Now that he has established himself in the business, he has opted for a more practical setup.

“I was new then in the Manila scene,” he says. “One of my primary goals was to build a steady clientele. To do that, I had to have a more homey shop that offered more exclusivity, adequate sitting areas and mood lighting.”

This time, Crisostomo’s receiving area is a more minimalist, “business-like” affair with a series of bright LED pin lights, as well as a glass-paneled façade that allows natural light in. He also limited the number of visitors’ chairs to help facilitate faster turnover.

“Since I now have a couple of things to attend to, time is of the essence,” he says. “It’s a balancing act. For the most part, my clients understand. They know that in order for me to provide them with beautiful clothes, I have to carefully budget my time.”

His architecture background from the University of Santo Tomas came in handy as he designed the shop—from its floor plan down to a number of components that make up the lighting system and laminated floor.

“Because of the glass panels, people from across the street can now see me attending to my clients,” says Crisostomo. “Since the shop is situated inside a semi-gated community, I was able to come up with a more open design without totally compromising my customers’ privacy.”

A wall, for instance, partly obscures Crisostomo’s small workspace. Parallel to his desk is the shop’s fitting area. Instead of resorting to outdoor signage, the designer’s name is spelled in black letters on an undulating white wall inside the shop.

The same wall separates the receiving area from the bigger, multilevel work area. The unit’s high ceiling proved to be both aesthetic and functional.

Thanks to the ceiling, the receiving area, although small, looks imposing, while the work area has enough room for a second level dedicated to cutting and finishing. Sewing, draping and putting on major embellishments are done on the first level.

“Before, I had to climb several flights of stairs to monitor the workers,” he says. “They, in turn, had to go down every so often if they had questions. Now, not only can I see them from my worktable, I’m just a few steps away from them.”

In lieu of a huge wooden desk, he opted for a smaller one made of transparent glass and metal. The piece is a faux space-saver that also allows Crisostomo’s tools of the trade, such as a sketchpad, two short glass vases filled with ordinary and colored pencils, and even a Holy Bible, to float.

Crisostomo’s restraint extends to his choice of pencils, a generic-looking colorless brand he bought at Office Warehouse. The other vase contains colored pencils, which, he says, come in handy whenever he designs pieces for Collezione.

“Clients nowadays don’t seem to mind if you render your sketches using an ordinary pencil. But for Collezione, it’s a must that I give my sketches a dash of color to help the production people.”

To complete the look, Crisostomo assembled framed photographs of models wearing his clothes on the runway. They now adorn the wall by his work area. Most of the images came from photographer-friends ranging from photojournalists, to bloggers and hobbyists.

“Originally, I wanted to hang behind-the-scenes photos of my shows,” says Crisostomo. “Given the lack of time, it was quite difficult to find the right photos.”