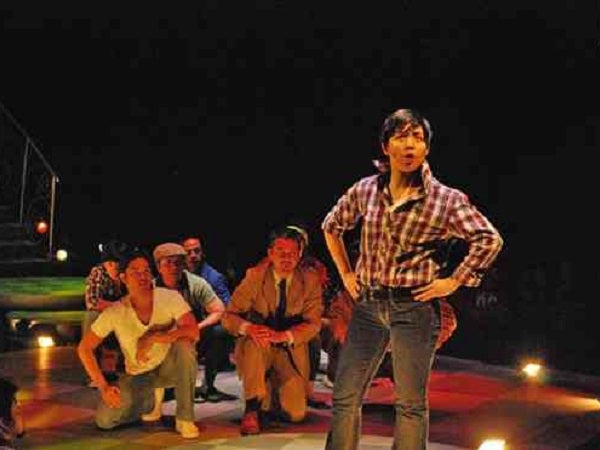 CRIS VILLONCO as the cross dressing Viola in “D’Wonder Twins of Boac,” adapted by Rody Vera from Shakespeare’s “Twelfth Night” and directed by Maribel Legarda

Philippine Educational Theater Association’s (Peta) “D’ Wonder Twins of Boac” was a wonderful and fun production that delivered on all levels.

Rody Vera adapted William Shakespeare’s cross-dressing comedy “Twelfth Night” and reset it at the decline of the 1960s Philippine movie industry. Far off enough in the past to elicit nostalgia and provide a workable world in which to recontextualize the characters, yet close enough to the present to give audiences, young and old, a more familiar lens to view the work with.

Twins Viola (Cris Villonco) and Sebastian (Chrome Cosio) were now a singing-dancing sibling act from Boac, Marinduque, before they were torn apart by the shipwreck at the beginning of the tale. Both would end up in Manila where they interconnected with Duke Orsino (Lex Marcos with alternate Bodjie Pascua) and Countess Olivia (Shamaine Buencamino with alternate Gail Billones), now arch-film studio owners.

On top of the play’s original gender-bending (with age-gap) love angles, Vera played up the homosexual undertones between Bastian and Antonio (Matobato alternating with Riki Benedicto), now both transformed into stunt men. Complete with a song number of their very own, the hidden homosexual desires of Antonio built on the theme of illusory/delusory identities and camouflaged feelings, while serving as a precursor to the adaptation’s final twist love matches.

And fittingly in this world that Vera created, the fool, Feste (Philip Lazaro with alternate Roi Calilong), and the character that’s made a fool of, Malvolio (Lao Rodriguez with alternate Gino Ramirez), in the Bard’s original text, were now film directors—a lovely, layered metaphor that alerted audiences to the clashes between the truths that these characters represented and spoke of, and the notion that audiences could be “fooled” by directors’ manipulations of truths.

The scenes where Viola is cross-dressed as Cesar and is chased after by Olivia, and later, by Orsino, are the fool-proof comic portions of “Twelfth Night,” and it’s no less different in this adaptation where the cast took the audience firmly by the hand and never let go. The furtive glances, square gazes, fleeting touches, stolen hugs, near-kisses, and the actual full-blown lip-locks never failed to elicit swoons and giggling from the audience.

Villonco gave Cesar his funny, awkward and bewildered moments, while Cosio played up Bastian’s comic scenes resulting from everyone’s confusion when his character finally showed up again. His now leaner body worked in his favor, since he used to be upstaged by his own bulky muscles.

Villonco attacked her role with gusto, charm and a good dose of earthy kookiness. If there was any doubt as to Villonco’s range as an actress, seeing her do comedy in Tagalog should clear matters up right away. With this role at this point in her career, audiences who have been following her career path can now really say she’s done it all: acting, singing, dancing, drama, comedy, English, Tagalog, female, and male!

And right up there on the same level of Villonco’s performance, it must be noted that the talented ensemble was incredibly tight. Everyone in the cast was given moments to have fun with, but no one milked the scenes or upstaged anyone else. The energy was evenly with each other, creating a powerful rhythm that made the show a joy to watch.

Notable also was Lazaro in his theater debut as Luciano, who seemed surprisingly well at ease working with an ensemble (given his stand-up comedy background) and with a script (although he still did let loose a few “look-at-me, I’m funny” ad-libs).

Directed by Peta’s artistic director Maribel Legarda, the play rolled along quickly and light-heartedly. No second was left hanging, as even scene changes were merrily filled with comic commentary.

The actors made good use of the spaces created by set designer Lex Marcos’ circular platforms that simulated toppled film reels. However, his TV screens that descended from the rafters from time to time felt highly contrary to the production’s film milieu.

Both Carlon Matobato’s choreography and Jeff Hernandez’s music were organic and spot-on. Matobato’s movements were earnest and sprightly yet thoughtful. He produced surprisingly intimate and eloquent little moments, achieving much with even humble strands of sampaguita.

Vera also created several songs set to music by Hernandez, who led a quartet that accompanied the proceedings with bubbly tunes, including a smart wink to Elvis Presley in one of the play’s many hilarious scenes where Elvis impersonators were being auditioned.

The costume and lighting designs were subtle with calibrated pops of color, movement and shapes. John Abul and Carlo Pagunaling’s silhouettes fully evoked the late ’60s without being flashy or “costumey.” Jonjon Villareal’s lighting illuminated the show without calling attention to itself.