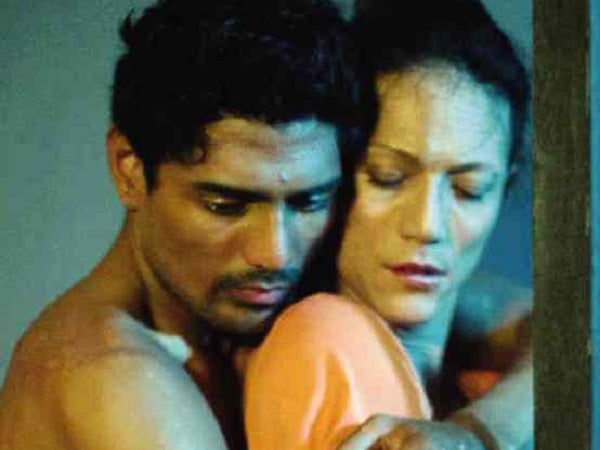 ALCANTARA as Valentin and Gandanghari as Molina. In this production, sex is the ultimate payoff; everything else becomes anticlimactic.

The press releases and the surrounding hype made no bones about it: The main attraction of this production, “Halik ng Tarantula,” a straight-play adaptation of Manuel Puig’s novel “Kiss of the Spider Woman,” is celebrity BB Gandanghari who is making her entrance into Philippine theater. Gandanghari is also the play’s producer.

There is nothing wrong with that per se. Many of the leading Broadway shows as well as some of Manila’s finest productions had name film stars cross over to the stage to bring in a new audience eager to see how the artist in question would rise to the challenge. Those who do succeed lose themselves in the character and bring their own nuances into their interpretation of the role, blending seamlessly with the other merits of the production as a whole. What starts out as a star turn becomes a striking, bona- fide, dramatic performance.

There is so much to delve into in “Kiss of the Spider Woman,” which has been translated both into celluloid and musical theater. The musical version, with book by theater luminary Terence McNally and set to music by John Kander and Fred Ebb, won the Tony Award for Best Musical in 1993.

William Hurt and the late Raul Julia played the leads in Hector Babenco’s 1985 movie. Hurt justifiably won several major awards such as the Oscar and the Cannes Film Festival for his turn as Molina, the homosexual imprisoned in an Argentine jail for allegedly corrupting a minor.

Molina is a juicy, meaty part that actors wanting to test their dramatic range would want to sink their teeth into. Back then, it was considered a bold if risky career move for Hurt, one of the top leading men in the 1980s.

As written, Molina is a flamboyant, complex character whose escapades into the films that he loves function as a mirror of his own fears, his fellow inmate’s, as well as the audience’s.

In “Halik ng Tarantula,” the late playwright Rene Villanueva shifted the scene from Argentina to Manila, and the use of the street vernacular makes the material punchy, familiar and easy to relate to. By itself, the dialogue of this adaptation was meant to light sparks between the two characters. For it must be remembered that, regardless of Molina’s flamboyance, this is a play about two characters: his and fellow inmate Valentin—two characters whose worlds are very much apart and yet at the end find common ground in their humanity.

Molina is supposedly the shallow one who prefers to dream away his difficulties by recollecting his favorite movies, while Valentin is the pragmatic, hardened rebel soldier who has no illusions about the world he is fighting in. The titular “spider woman” is the enigmatic character in Molina’s tale, ostensibly representing their innermost desires: Molina’s desire to be a woman and Valentin’s longing for his lost fiancée.

Their contrasts make these two characters immediate combatants, yet their own quest for their humanity and their place in the world draws them together. The characters were written to make the audience confront their own internal demons: Where does hope lie? When does one fight and when does one let go? What is the better world that we must build? To what lengths should we go to reclaim our identity and self-respect?

It is a tapestry of difficult soul-searching that the spider woman, embodied in the leading lady character narrated by Molina, weaves the two characters into.

The discourses between Molina and Valentin should have been alternately explosive, gut-wrenching and comforting as they collide and connect. However, from the beginning, Gandanghari and Jet Alcantara as Valentin play it as a buddy movie. There is no initial animosity, no tension at the difference, not even the macho soldier’s disgust at sharing a cell with a gay inmate.

Villanueva’s homegrown dialogue works against itself as the familiarity of the language makes the two bounce off each other like estranged but now reunited childhood friends. There is no drama in them drawing closer to each other, because they seem never to have been apart.

Much of the philosophical, political and emotional layering that we had seen in the film and the musical, and which is ostensibly present in the original novel, is lost in this approach. Perhaps director Soxie Topacio should have rehearsed his actors more.

Gandanghari’s one-note performance plays Molina as an aggrieved homosexual out for his self-respect, and who happens to fall in love with his cell mate. The center of the drama no longer lies on how the two create a bridge between them while preserving their differences, but on how and when Valentin will reciprocate Molina’s affections.

The inevitability of it all makes you want to just have the play on flash-forward mode. Nowhere do we feel Valentin’s struggle with his self-identity as he finds a connection with someone so alien to him. Instead, Alcantara’s physicality is highlighted in scenes featuring his frequent partial nudity, all meant to titillate but ultimately uncover nothing of the texture of the material.

The sex that happens in the film and the musical resonates as a closure and acknowledgement that the walls have temporarily opened. The characters have reached a détente, but they have not lost their souls or their causes in the process.

In this production, the sex is the ultimate payoff as Molina wins her man despite his macho veneer and reluctance, and everything else becomes anticlimactic. The ending that should have seen a poignant separation of ways becomes a reunion in heaven, metaphorical or otherwise.

At the end, Molina is even acknowledged as the spider woman or the tarantula of the production. The lady in question was more than that. She was mysterious, enigmatic, revealing, with a key into the dark and redemptive natures of the human soul. Unfortunately, this writer never saw her in this production.