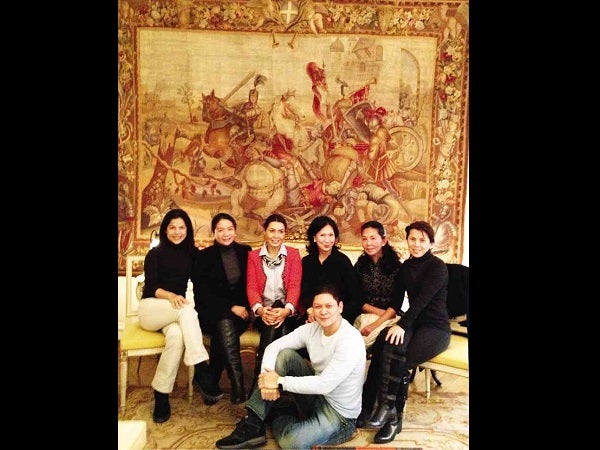 I recently went on a trip with three childhood friends—Kit Zobel, Laurie Jimenez Westfall and Marianne Po—to one of the most enchanting and beautiful cities in the world, Paris. Our friendship spans close to 40 years, as we were classmates from Grade 1 onward.

In Paris, we opted for an apartment in the seventh arrondissement rather than a hotel to give us a local feel of the city.

The four-bedroom apartment was ideal for us, but there was only one room with the breathtaking view of the Eiffel Tower, and guess who got it—me! Thank you, ladies!

As in all French apartments, the elevators were a bit challenging, as they could fit only three persons at a time. Marianne and I would joke that riding it was akin to riding the roller coaster at the Fiesta Carnival of our youth: You weren’t sure of coming out of it alive!

This trip was truly special, not just because of Paris, but more because these ladies all had families of their own, and had taken a breather from being wives and mothers to do something just for themselves.

For Kit, the timing was perfect. She flew to Paris from Davos where she attended, with husband Fernando, the Davos World Economic Forum.

Laurie lives in Frankfurt, Germany, with her husband Matthew and three daughters, so Paris was a three-hour train ride.  Marianne Po (married to Ted Po, with two sons and one daughter) and I were traveling from Manila.

Like all great trips, we spent hours shopping, sightseeing and eating. I was amazed at how much foie gras and French heavy creams these ladies could consume, and yet remain thin.

The best meals we had were at Le Coq Rico, the very expensive Joel Robuchon and the Shang Palace at the Shangri-La Hotel. Chinese in Paris? You can never take the Asian out of an Asian.

Despite the cold (it was -8 degrees at its lowest), we were able to go around. It is actually quite fun to dress up in winter, until you see what the locals are wearing. Then you get the urge to go home and change.

In the shopping department, we went to our usual haunts—from Bon Marché and the shops at Rue Saint-Honoré to Colette—and my new favorite places. First off, I did not know that there were outlet stores in Paris.

The best tour guide/driver Andy Celario (+33640952768) introduced us to La Valle Village. Close to Euro Disney, it has about 90 stores, from Céline to Moncler, Givenchy and Ralph Lauren. It was a great place to shop despite the crowd. My new favorite store is Cos (part of the H&M group), whose clothes are reasonably priced and very stylish.

Lastly, Merci is a three-story retail shop with a café; it sells furniture, fashion and beauty products (by Aesop). This store gives 100 percent of its sales to charities, helping women and children in Africa.

What’s a vacation without photos? I am so obsessed with my iPhone’s camera that I no longer need to bring a point-and-shoot one, what with all the apps, the split pics and the photosynth. We had fun going around the city and taking photos of Paris’ most famous landmarks, from the Champs-Élysées and the Louvre to the Place de la Concorde.

I had a meeting with Ophelie Renouard, director of Le Bal des Débutantes at the Crillon Hotel, which also served as a great venue for celebrity-watching. We saw actor Christopher Lambert (“Greystoke: The Legend of Tarzan, Lord of the Apes”), the fashion muse/author Ines de la Fressange and American pop princess Taylor Swift with One Direction’s Harry Styles. (We also saw Julianne Moore at Colette.)

The Crillon Hotel will have a two-year renovation, so the Bal des Débutantes will be held elsewhere this year. If all things push through, we could have a representative this year. Fingers crossed.

I was privileged to go to the very private Hermès Museum at the brand’s Saint-Honoré boutique. It is a fascinating collection of objets d’art, as well as equestrian gear, by the Hermès family, a great peek into how life was lived then. Thank you to Mario Katigbak and Angelina Legaspi of Hermès Philippines for facilitating!

A trip to Paris, for me, is not complete without visiting a most wonderful lady and friend, Babette Aquino Benoit, who entertained us in her lovely home. We were joined by the über-talented and always stylishly elegant Roseanne de Pampelonne and the vibrant and beautiful Yvette Lhuillier Warnod.

Babette served us wonderful French fare which included Moules Mariniere, Beef Bourguignon and Crème Brûlée. The result was a momentary coma that lasted till the next meal, which was actually in a few hours.

There were many highlights of the trip, but probably the best was the downtime—just reminiscing about school, talking about classmates, laughing and being silly. We were a world away from the responsibilities of family and career.

It was “our” time, which, in a fast-paced world with looming obligations, is not only memorable but truly a treasure.

I would recommend this to everyone, with family or dear friends. Time is very short, and making “memories” with those nearest and dearest is truly a luxury. Am off to another trip this week, this time with Crystal Cruises, with my good friend, the sea princess, Tessa Valdes. Quite excited to catch up and see what gowns she will be wearing.

We plan more trips together—this time warmer places. So far, the choices are Siem Reap, Bangkok and Hong Kong. But with everyone’s schedule and all, we would probably settle for somewhere in Batangas or Balesin first.

To Laurie, Kit and Marianne, I would like to express my deepest gratitude for all the wonderful years of friendship, laughter and memories. Can’t wait for more!