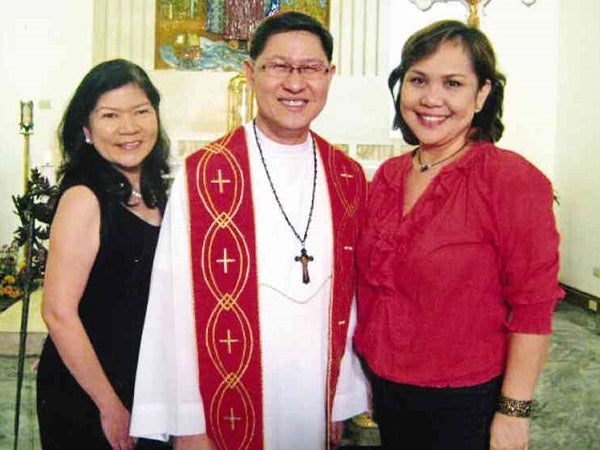 Manila Archbishop Luis Antonio Cardinal Tagle, who’s now in Rome for the conclave to choose a new pope, leads the list of homilists of Make Mine Productions’ television presentation, “The Seven Last Words in the Year of Faith, Year 26,” on March 29, Good Friday, 12 nn to 3 p.m., on IBC Channel 13.

Cardinal Tagle will reflect on the last word, “Father, into thy hands I commend my spirit.”

Make Mine Productions takes from the ABC Promotions Inc., which had been producing the TV program for the past 25 years. For the 26th edition of the Lenten special, executive producer/director Meng R. Canlas shot the episodes partly in the Holy Land with Fr. Erick Santos, who will speak on the fifth word, “Truly, I say to you, today you will be with me in paradise.”

All homilists will center their reflections on the Year of Faith, and the call of every Christian to stand up for the faith.

Fr. Larry Faraon hosts the program from a script by Chit M. Chua.

A  Marian Encounter seminar will be held on March 17 at the Tan Yan Kee Student Center of the University of Santo Tomas, 8 a.m. to 5 p.m.

The seminar will have as Lenten theme, “Mary at the Foot of the Cross.”

Father Aliño is the parish priest of the Sto. Niño Shrine in Bago Bantay, QC.

The seminar will end with the celebration of the Eucharist at 4 p.m. by Fr. Choy Ramos.

For further information, call the Missionaries of Mary at 7438729.

The Sisters of Mary and the Brothers of Christ will mark the 21st death anniversary of their founder, Servant of God Msgr. Aloysius Scwartz, on March 16, at Girlstown in Biga, Silang, Cavite, with Mass which supporters of Girsltown and Boystown will attend.

Msgr. Scwartz initiated the Girlstown and Boystown project in Busan, South Korea, when he was a missionary there. It sought to help poor boys and girls go to school. The late Cardinal Sin invited him in 1985 to set up the same here. Some 4,000 boys and 4,000 girls have been helped by the ministry.

As its way of giving back for the success of Dermcare Luxe, Zenaida Palisoc, president and CEO, has been sending 25 scholars to college under her late husband’s Joselito I. Palisoc Scholarship Foundation Inc.

The scholars study in state universities.

In the Year of the Faith this 2013, more and more priests are joining Adams Express Travel to launch their own group departures that start in the Holy Land, Egypt and Jordan.

In their second departures, they choose the Marian route which includes Lourdes, Fatima, Nuestra Señora del Pilar in Zaragoza, the Black Madonna in Montserrat up in the Catalonian mountains.

Doña Josefina Reyes vda. de Abraham passed away on Feb. 4 at 2 a.m. on her 99th birthday  in her house in Tuguegarao, Cagayan Valley.

“Ma Afing,” as she was affectionately called, was the wife of the late Pedro Abraham, first cousin of St. Charbel, the Meronite monk from Lebanon.

The Prayer Warriors of the Holy Souls will hold a “Mass of Remembrance” on March 11, 11  a.m., at the Chapel of the Nativity of the Blessed Virgin Mary, lower level of the Immaculate Conception Cathedral on Lantana St., Cubao, QC.

A priest will be available for confession before and after the Mass. The saint friend of the Prayer Warriors for March is St. Catherine of Bologna.

Blessings to Bangued Bishop Leopoldo Jaucian, SVD, on his 25th anniversary as a priest on March 12.  A Thanksgiving Mass will be held at the Cathedral of St. James in Bangued, Abra, at 10 a.m.