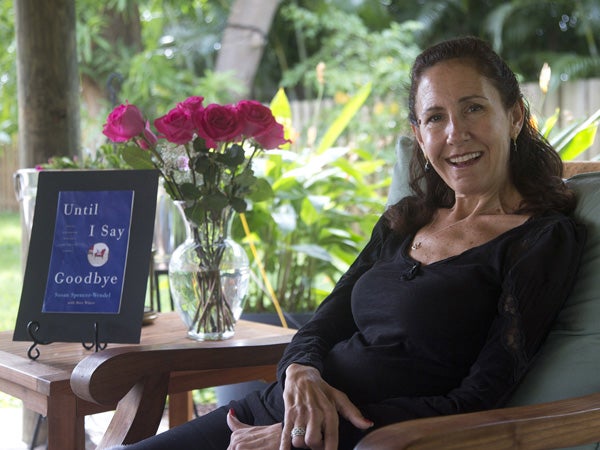 In this Dec. 31, 2012 photo, Susan Spencer-Wendel poses for photos with a copy of her book nearby, in her home in West Palm Beach, Fla. All the time-stamped rigors of daily journalism are behind her, but the pace of Spencer-Wendel's life has only been hastened. She is dying from Lou Gehrig's disease. What was once a constant rush to be first with her courthouse scoops has become a dash to live her remaining days joyfully, complete a long goodbye to those she loves, and record it all in a book that has drummed huge interest and a multimillion-dollar book deal. (AP Photo/J Pat Carter)

WEST PALM BEACH, Florida — All the time-stamped rigors of daily journalism are behind her, but the pace of Susan Spencer-Wendel’s life has only been hastened. She is dying. And dealt a diagnosis she knows she can’t beat, the race is on to finish.

Her greatest story. Her toughest assignment. Her final deadline.

Spencer-Wendel’s job as a court reporter at The Palm Beach Post made her a local fixture, reporting on everything from the 2000 presidential election recount in Florida to conservative commentator Rush Limbaugh’s legal woes. But what was once a constant rush to be first with her courthouse scoops has become a dash to live her remaining days joyfully, complete a long goodbye to those she loves, and record it all in a book that has drummed huge interest and multimillion-dollar book and movie deals. The clock ticks forward as her body is betrayed by Lou Gehrig’s disease and yet so much is left to do. Her life has been full of happiness and she sees no reason her last days should be much different.

“Life is full of chapters,” she says, knowing full well this is her last.

Spencer-Wendel was on auto-pilot, locked in a time-worn routine of breaking news at the Post and “navigating the daily dance of sibling warfare” at home with her three children. That day in 2009 was just like every other, until she undressed for bed and noticed her left hand, scrawny and pale, starkly different from her right one.

“You need to go to the doctor,” her husband, John Wendel said.

She went through a year of medical appointments and tests and a subsequent year of denial. She sunk into depression and contemplated suicide. When the verdict of Lou Gehrig’s Disease, or amyotrophic lateral sclerosis (ALS), was finally delivered, there was no surprise.

On the way back from the neurologist, she waited outside when her husband stopped in a Burger King for a bite. And reflecting on the news she received, she was overcome with a strange feeling of gratitude, for the 44 years she had lived with nary a health problem to speak of, for the career, the family, the travels, for all she’d been blessed with. Before long, a roadmap was in place for her remaining time.

She would travel the places she wanted to go, surround herself with the people she loved, prepare her family for what’s to come. She would live. Joyfully.

She went to California to find her birth mother; to New York, where her teenage daughter tried on wedding dresses for a glimpse of a day they’ll never share; to Budapest, where she and her husband retraced footsteps of an earlier life; to the Yukon, in a vain attempt to see the Northern Lights with her lifelong best friend; to the Caribbean, to Cyprus, and on and on.

Along the way, she wrote stories about two of her trips for the Post that were so heartbreakingly recorded they caught the eye of HarperCollins, which gave her a $2.3 million deal, and Universal Pictures, which followed with a seven-figure offer of its own. She sprinted to continue her travels and to put them in writing, tapping out the vast majority of her book, “Until I Say Goodbye,” on her iPhone using just her right thumb.

She believes it is the best thing she has ever written, this narrative in which her travels are documented alongside her own decline. Now 46, the woman who rushed to hearings and banged out stories in a flash no longer can walk or swallow a pill. But she offers a manuscript as likely to tug at the funny bone as the tear ducts.

“I did not want to write a maudlin book,” she says in an interview, “I wanted people to laugh.”

It is tinted by her life in journalism, easy-to-digest chapters with simple language, each of them like stand-alone stories buttressed by engaging starts and even stronger finishes. It was a conscious effort on her part, and that of her co-author Bret Witter, to focus so intently on each story’s ending. And she’s quick to see the parallels in her own life, her own search for a powerful ending.

As that day draws closer, she’s comforted by the way her son Aubrey notices the sky’s brushstrokes as the sun goes down, how Wesley talks of being a dolphin trainer and Marina dreams of living in New York. She thinks about her husband John and prays he finds love again, that he loses not a moment to guilt. She laughs and reads and writes. She lives the best she can, hoping to impart lessons with her parting choices.

“I am not gone,” she writes. “I have today. I have more to give. I know the end is coming but do not despair.”

Spencer-Wendel’s body has withered and weakened. She must rely on her husband to do nearly everything for her, from lifting a Parliament cigarette to her lips for a drag to folding her hands on her lap and fixing her hair. As the book’s March 12 release approached, though, her appearance was most notable for the wide smile she wore and the peace that she radiates.

She relaxes this average Tuesday afternoon, watching “Law & Order” in her den, enjoying a lick from her new French bulldog and laughing with glee when her sister pays a visit. The book is done, the travels are over, but Spencer-Wendel has found a measure of solace as her life draws to a close. Most ALS patients die within three to five years of diagnosis. She knows her days are few.

Though there are new challenges each day, Spencer-Wendel has also found new joy. Eating and swallowing keep getting harder, but she’s thrilled by the interest in her book, by the new articles and clippings that keep arriving in her mailbox. Her voice becomes more and more garbled, yet she relishes the time she and her husband share even though it is her illness that forced him to quit his job. She constantly looks on the bright side.

She is comforted by the windfall her book has brought, the financial freedom it will bring to those around her. But she must prepare her children for what’s next, must say everything that’s left to be said. Some of it, she hopes has been communicated through her writing and her philosophies and her outlook.

To accept what comes. To relish the journey. To see fear as a waste of energy.

More than anything else, she wants to leave her family so well situated that they will thrive as much after the day comes as before. That they will live. Joyfully.