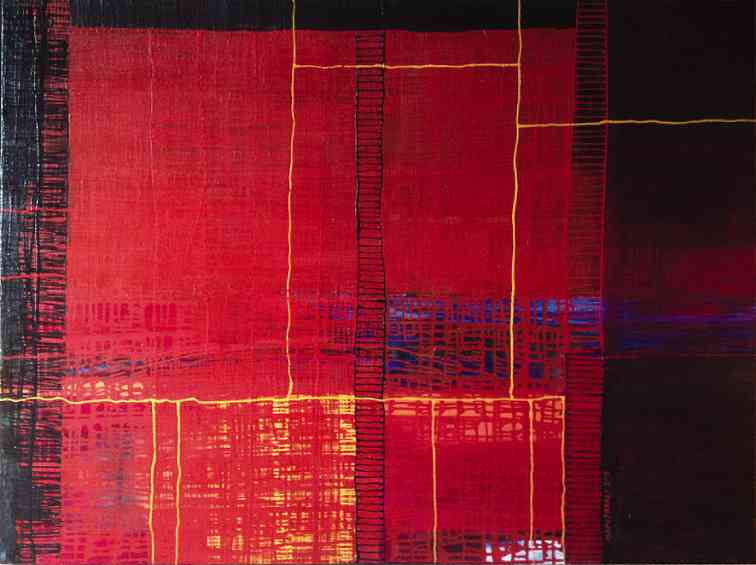 It is said that when an artist paints, she seems to go through a trance, one that brings her to an abyss of colors, forms and shapes, where thoughts do not exist.

Time may stand still but the hands move. The eyes would follow them while the body gestures according to the form that is slowly creating itself on the canvas.

When Jane Arrieta Ebarle starts to paint, she does not live in this world anymore. She seems to transcend from a mind of chaos to the silence of some place where even she doesn’t  know herself.

“It is only the viewer with an open-ended understanding of art who can appreciate abstract art,” said Ebarle.

Such is required of viewers to appreciate “Hibla,” her abstract renditions of Philippine native weaves that have garnered much acclaim.

“‘Hibla’ formed itself,” she said.

At first, it was the result of her fascination with ethnic motifs which she infused with modernism. Then she discovered she could do other things with painting techniques.

Ebarle’s signature has since evolved from the renditions. Someone quipped that her works looked like a Jackson Pollock, but when she went to the Museum of Modern Art in New York and saw the American artist’s “One: Number 31, 1950,” she was aghast. She said she could never do such a magnificent thing.

But, yes, she admires Pollock a lot. As she also admires Lee Krasner’s works.

Ebarle obtained a Fine Arts degree  in Advertising from University of Santo Tomas. Among her teachers was Mario Parial.

Now a marketing executive of Faber-Castell Philippines, Ebarle acknowledges her mentors in UST for her art and   marketing career. She tries to give back by having Faber-Castell support or organize art workshops all over the country

Her signature hews closely to her art training and passion. “This technique is laborious but I love every drip of color on my canvas,” she said.

She insisted, though, she was  still evolving her style.  There are many avenues for change, a great departure from the old techniques. She explained that when she looked at the future, she saw native women dressed in traditional Filipino attires and ethnic designs.

Ebarle said she was looking forward to doing further researches on regional textiles, such as the weaving traditions of  the Maranao from the South and the Kalinga from the North.

Ebarle will join the group art exhibit, “Cornucopia,” with Flexy Casero and Jose Johann Bitancor,  which opens on March 17 at the Bliss on Bliss Art Projects in New York.

The exhibit will be followed by “Hibla 6,” her sixth solo show, which opens on March 18  at the Philippine Center in New York.

“‘Hibla 6’ is akin to a sheet of local fiber,” said Ebarle. “I made my style more similar to the fibers of a textile but the colors are nationalistic, ranging from the reds to the blues, whites and yellows, and a splattering of greens to make it more of a painting than the colors of a flag, or so I thought. Here, I curbed a little of my tendency to do radical abstraction. I just allowed, the play of colors to come into full circle. The paintings are more into fibrous movements.”