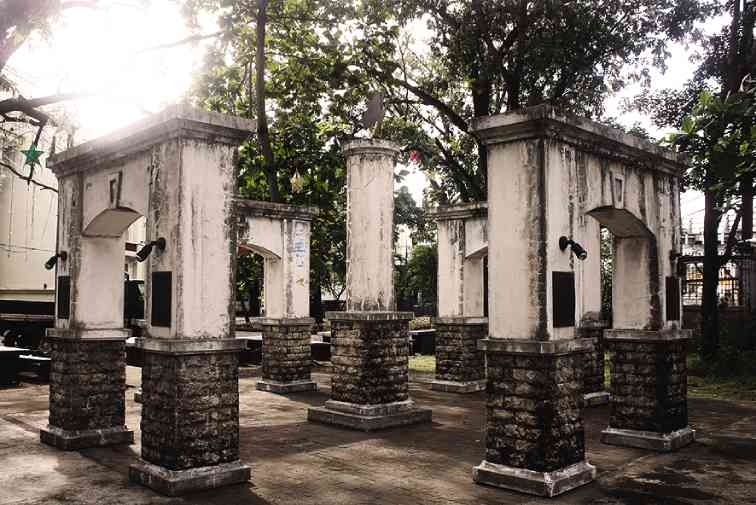 UNIVERSITY of San Agustin Centennial Memorial put up in 2004

Panay pride and Augustinian audacity were in full display when the University of San Agustin  (USA) in Iloilo City celebrated  the 60th anniversary of its elevation as a university last March 1 with a solemn High Mass of thanksgiving, a concert that featured a magnificent Olympic-style gallery of lights performed by some 2,000 students, and an impressive fireworks display.

Although USA was elevated as a university on March 1, 1953, its foundation is older. It was founded as a preparatory school for boys by the Augustinian friars on July 15, 1904. Therefore, it is already 109 years old, the oldest university in Western Visayas.

The Order of Saint Augustine (OSA) holds a stellar place in Philippine history. It is the oldest religious order in the country, its members having been the first missionaries to lead the highly successful evangelization of the Philippines.

The university was originally founded by the Spanish friars belonging to the Province of the Most Holy Name of Jesus of the Philippines and affiliated with the University of Santo Tomas of the Dominicans in Manila. It is now managed by the Philippine Province of the Augustinians and has been granted full autonomy by the Commission on Higher Education.

The university houses some of the top schools and programs in the country: Its law school is among the country’s best (its bar topnotchers have included Supreme Court associate justice Carolina Griño,  Cornelio Gison, Wenseslao de la Paz, Mario Guarinia and  Dolores Abad-Alinio; its faculties in the sciences have produced top nurses, medical technologists and engineers; and its Liberal Arts and Education programs have produced top scholars, humanists and educators.

Main celebrant during the thanksgiving Mass was a true-blue Ilonggo, Cebu Archbishop Jose Palma, president of the Catholic Bishops Conference of the Philippines. (Co-celebrant was Jaro Archbishop Angel Lagdameo.)

In his homily, Palma couldn’t help but refer to the fact that USA was celebrating its anniversary a day after Pope Benedict stepped down.

“I believe all of us are trying to get reconciled with  the fact that the Pope has renounced the papacy,” he said. “Shortly after the death of Blessed John Paul II, and once more starting today, during the Eucharistic prayer, the celebrant does not mention the Pope’s name.  Yet in that part of the Mass we still picture the Pope Emeritus, Benedict XVI.  If I mention this it is because we all know that Benedict is very much Augustinian.”

Palma was referring, of course, to the Pope’s solid Augustinian theology.

Palma said USA had benefited not only Ilonggos but also all the people of Panay.

“USA commits to the education that recognizes what is true, good, beautiful and noble,” he said. “Hence, we are happy at the thought that USA has a sturdy commitment of preserving the Filipino culture on the island of Panay.  Efforts at heritage conservation, appreciation of historical landmarks, publications of Hiligaynon, Kinaray-a, Akeanon are most appreciated.”

Palma also emphasized that academic freedom should not be an excuse by members of the Catholic academe to contradict or attack Catholic teachings. He quoted Pope Benedict XVI:

“In regard to faculty members at Catholic universities… you are to reaffirm the great value of academic freedom.  In virtue of this freedom, you are called to search for the truth wherever careful analysis of evidence leads you.

“Yet it is also the case that an appeal to the principle of academic freedom in order to justify positions that contradict the faith and the teaching of the Church would obstruct or even betray the university’s identity and mission, a mission at the heart of the Church’s munus docendi  (teaching mission) and not somehow autonomous or independent of it.”

In the afternoon, there was  a roundtable discussion on the history of USA. Discussants were Fr. Eusebio B. Berdon, OSA, prior provincial of the Province of Sto. Niño de Cebu in the Philippines; Fr. Arnel Antonio S. Dizon, OSA, VP for academic affairs of Colegio de San Agustin in Biñan, Laguna; and Jose G. Espinosa Jr., retired professor.

Father Berdon emphasized Saint Augustine’s theology of “interiority” as the basis of the Augustinian educational mission, which not only involves scholarship and learning but also “intellectual charity.”

Father Dizon traced the beginnings of the Augustinian educational ministry in the Philippines to the asilo de escuela of Augustinian orphanage in Paco, Manila, in the 19th century.

Professor Espino colorfully recounted his teaching years in USA, capped with a grant he got from the Spanish agency of economic cooperation to translate the ancient “Monografias de Pueblos de Panay”  written by the Spanish Augustinian friars into English.

USA has published the collection of monographs in bilingual edition; it has been named one of the required readings on Visayas history and culture by the National Book Development Board.

The discussion was followed by the formal launching of the USA Philanthropic Office (USA-PO).

The USA-PO was called a “milestone” by USA president Fr. Frederick  Comendador, OSA. He said the new office “is primarily tasked to assist the university in generating and scouting for funds coming from generous donors, be they individuals or groups that are believers in the university’s advocacies and are willing to become partners in her mission.”

Comendador said the new office would not only seek “to secure the future of the university but also remind ourselves that education—the vocation to teach and transform the mind and hearts of students—is inherently a philanthropic act. It is a magnanimous, selfless and self-sacrificing act whose allegiance is renewed regularly in our day-to-day struggles.”

Donors will be inducted to the Fr. Dolse Garcia, OSA, Fellowship, named after the Spanish Augustinian friar who led the reconstruction of USA after the devastation of the Second World War, and its elevation to university rank in 1953.

Other donors, especially corporate donors, will be permanently enrolled in the Benefactors Wall that will be set up on the ground floor of Urdaneta Hall.

One of the major infrastructure projects will be the development of the Plaza de San Agustin in front of Herrera Hall or Administration Building. The site is familiar to USA alumni and Ilonggos since it is where the statue of Saint Augustine proudly stands.

According to USA officials, the site will be paved with special tiles bearing the names of donors.

Another major infrastructure project is the construction of a new library near the center of USA, where the old U-shaped Dolse Garcia Hall now stands. The envisioned building is planned to be one of the biggest and most modern in the Visayas. Aside from books and electronic and digital learning materials, it will also house rare books and ancient manuscripts from the vast Augustinian collection.

Other support infrastructure projects seek to beautify further campus, already known for its beauty and conduciveness to learning in the region.

A botanical garden will be set up and named after Fray Manuel Blanco, OSA, author of the seminal work and beautifully printed 19th-century book “Flora de Filipinas.”

Shown was the 3D rendition of the planned Garden of Firsts that will be a memorial to the intrepid Augustinian spirit. It will particularly trace the voyage of the first Augustinian missionary batch across the Atlantic and the Pacific to reach the Philippines in 1565.

Its rich heritage has made USA a showcase of culture in the Visayas. In fact, the Augustinians are leaders in cultural conservation. Fr. Harold Rentoria, OSA, the vice president for academic affairs of USA, is a former commissioner for cultural heritage of the National Commission for Culture and the Arts.

The day was capped by a rousing concert at the USA Gymnasium that displayed the youth and promise of students.

That promise was more than shown by the Olympic-style synchronized image-making by 2,000 students.

One of the two galleries of the gymnasium was filled with  female Physical Education students wearing white jerseys seated on the bleachers. At the closing ceremonies, the gym was plunged into darkness, dreamy music wafted from the speakers, and, at the appointed time, the students switched on pen lights that they, it turned out, had been holding in both hands all along, so that the entire gallery became a huge screen of dancing lights, like fireflies dancing in sync.

At one time, they formed the three letters of the university acronym, and the agility and grace with which they performed the stunt, along with the other stunts, should impress one about the University of San Agustin—that amid such depth and richness of history, it has so much vitality and promise to sustain and carry its mission  all the way through its exciting next century.