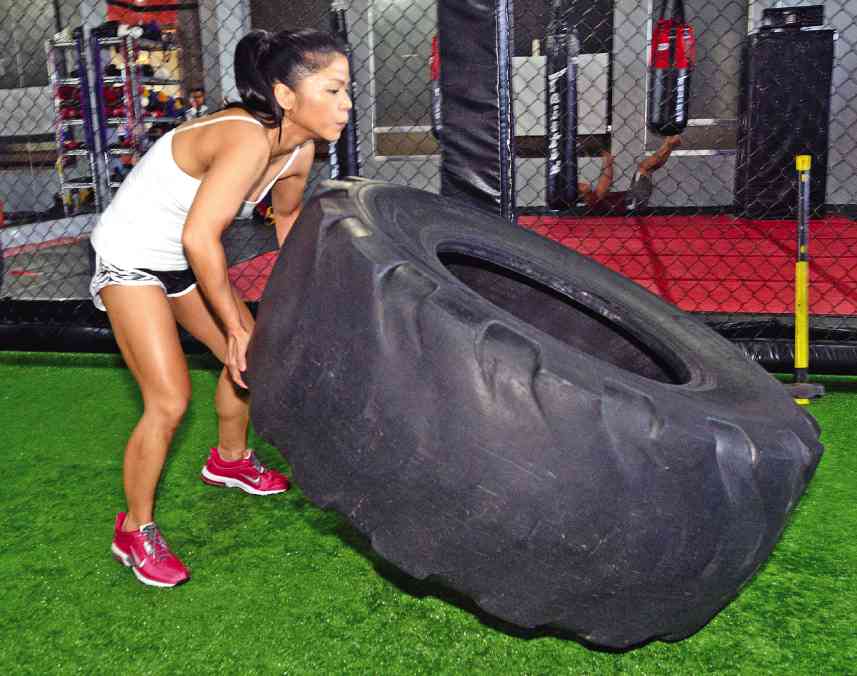 How many 45-year-old mothers can boast of a 22-inch waistline? Well, this fashion designer does. And not only that—she can also lift objects almost four times her body weight.

Petite fashion designer Michele Sison, standing all of 4’10” tall and weighing a mere 88 pounds, has been working hard to maintain her physique since she was 16 years old. She was just in high school when her mom enrolled her in an aerobics class, which was all the rage back then.

It also helped, of course, that she was raised by fit parents. Her 75-year-old dad can still stay on the elliptical machine for two hours, and her 74-year-old mom can still keep up with the family when they go hiking.

The eldest of five children and a mother of one 22-year-old son, Sison is a huge fan of functional training. Her personal trainer visits her at her home twice a week for her dose of Cross Core 180, TRX, Kettlebell and ViPR sessions. On top of that, she also goes to the gym three times a week. Recently, however, Sison has added a new routine to her morning ritual—another dynamic functional exercise called the Caveman (woman) workout.

Not to be confused with the Paleo/Caveman diet, the Cavewoman workout is circuit training that pumps up the heart in the fat-burning zone in under three minutes, and keeps it there for one hour and 10 minutes. It is an exhausting routine, to say the least, of going around 10 stations for three rounds with almost zero rest in between. (The only time you “rest” is when you transfer to another station, which takes about 10 seconds tops.)

This is not your traditional gym circuit routine of machines and free weights; those are for sissies. These are heavy-duty sledgehammers; ship ropes weighing five to 20 kilos each; tires, including an airplane tire that weighs up to 150 kilos; suspension training; and mountain climbing, to name a few.

“The Caveman workout improves my agility and my reactionary forces. If I lose balance wearing high heels, my core and strength are good so I just bounce back and not fall. I feel so much stronger and able now. I am at my strongest,” Sison said.

The Caveman workout is offered at the new Ultimate Fitness Metrowalk at the G/F Metrowalk, Ortigas Avenue, Pasig City. So, in addition to her personal training at home and her gym workouts at The Shang Place, Sison attends the Caveman classes twice a week, where she swears she burns at least 600 calories per session.

All eight coaches at Ultimate Fitness Metrowalk are mixed martial arts fighters. The workouts, in fact, are based on a fighter’s conditioning training. Beginners can join the Spartan class, where you train using only your body weight. Next level is the Caveman workout, where you do circuits of dynamic functional training. The final level is Fight Form, where so far only real-life fighters are enrolled.

Erwin Tagle, a mixed martial arts fighter and one of three owners of Ultimate Fitness Metrowalk, said the Caveman workout was designed because of combat sports.

“The average Joes and Janes can be battle-ready even if they don’t fight. They are conditioned like fighters. In martial arts, for example, your body becomes your weapon. In training, you become stronger. So there is that realization that you are powerful,” Tagle said.

Sison, however, jests that the only battle she’s fighting right now is genetic destiny. “I am fighting for self-preservation,” she said, laughing. She had, however, been into boxing even in her younger years when she used to spar with other boxers her size.

Tagle also said that since the Caveman classes were offered in January, four students have already dropped more than 30 pounds. Conditioning trains the body, he said, to maintain the same strength, power and stamina from start to finish.

If the Spartan class teaches students to be mentally tough and test their ability to endure the pain, the Caveman conditions them to maintain form and power throughout the entire class. Because it is a high-intensity interval training, students burn calories even hours after the workout.

“If you jog for 10 minutes you’re not really burning any fat yet. You would still be in the warm-up zone. You need to push your heart rate up to reach the fat-burning zone. How long will it take you to reach that zone doing the conventional workout—45 minutes, two hours, three hours? Here, you are almost instantly put into the fat-burning zone,” he said.

The tire lift, for instance, a routine where a student lifts the tire from the ground and flips it over and over, is similar to the traditional deadlift in benefits. The tire lift, however, is functional and nonrestrictive. The uneven weight makes the student engage their core and spine more, said Tagle.

And while the tire weight might be lighter than those used in deadlifts, the students learn proper form and do repetitions of, say, flipping a 100-pound tire 60 times in two or three minutes.

“Even if you are 600 pounds stronger and 300 times better than me, if in one minute you get tired, then you are helpless. You will lose,” he said.

Sison said working out really helps her enjoy a bit of freedom in her diet. “My family loves to eat and drink. We’re not saints. I don’t say I eat with gusto, but I exercise with equal gusto. I can eat and drink and be merry with my family. I can have my salted caramel and pizza tonight and tomorrow I work out with gusto. It balances out,” she said.