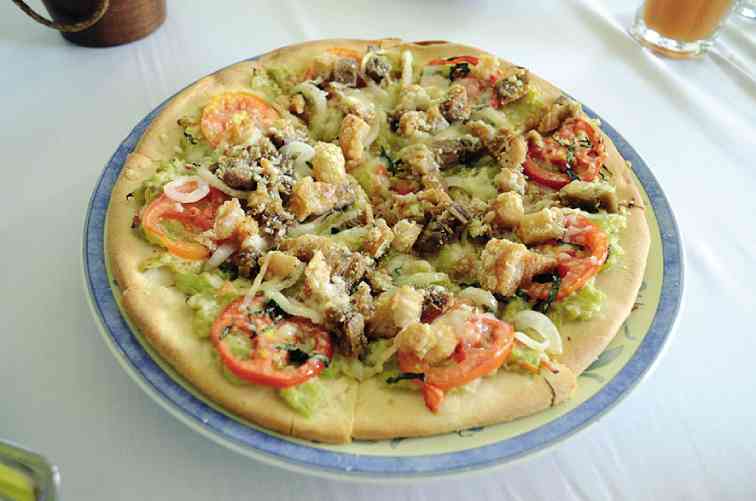 Siling duwag: I thought that best described the green chili before me. It looked like the ordinary siling haba or siling pang-sigang, but you could eat it and not feel the stinging heat.

During my first visit to Ilocos Sur, I tried to convince a companion to take a bite of the chili. She did, and started to jump up and down. It wasn’t hot, but her mind was conditioned to the effect. Or, it could be that a rogue chili, the real green, long chili, was mixed in with the lot.

It was Chef Nick Rodriguez who gave me the chili’s name. At his Bistro Candon in Ilocos Sur, he served the siling duwag in the pinakbet, a combination of vegetables boiled with a bit of bagoong isda (fish paste) and mixed in with pieces of pork.

At Sam Blas’ Saramsam Restaurant in Laoag, Ilocos Norte, the siling duwag is a dish cooked as adobo. For first-timers, it can be exciting to eat something that seems forbidden. The un-hot chili reminded me of the fimientinos de padron of Galicia, Spain—same effect, no heat. Galician women at the market can tell which ones are safe to eat but, I was warned, they sometimes miss. That makes it an adventure eating them, battered and deep-fried at the Spanish tapas bar.

The other unusual fact we noticed during the three days we stayed in Ilocos is that pizza was always present at many places. It was offered at one bakery in Laoag. And it serves as the base for many Ilocano food in at least two restaurants we had been to.

My first encounter with pinakbet pizza years ago was at Herencia Café in Paoay, a delightful little place with a view of the ancient Paoay Church. It was different, yes. But I had reservations as to whether that was good for traditional cooking. The idea caught on and more restaurants now serve pizza.

On this recent visit it was pinakbet pizza at Saramsam (Rizal Street, Laoag). I may have been hungry but I liked it. Think about it: Tomatoes are important to both Italian and Ilocano cooking. Tomatoes form the base of pizza and whatever toppings are used say something of the place, the ingredients and cooking of the people.

We thought of ordering pizza dinardaraan. That’s how Ilocanos call their dinuguan, or blood stew. But we thought that was too much since we had dinardaraan as is, including the still crisp chicharon bulaklak pieces (part of pig’s alimentary track, deep-fried) that made this dish rich and special.

At Bistro Candon, Rodriguez made another pizza version. It had the Ilocos eggplant omelet with the outrageous name (at least to non-Ilocanos) of poque poque. Pieces of bagnet were strewn on top—crisp pork chunks that are boiled, dried, fried and refried.

We did have traditional dishes, all excellently done, which makes a trip to Ilocos always something to look forward to.

At La Preciosa in Laoag (JP Rizal Street), our welcome lunch to the place included miki, freshly done noodles in achuete-colored soup. There was insarabasab, pork slices grilled then dressed with sukang Iloco, or sugarcane vinegar that some people there call “balsamic” after the special Italian vinegar.

There was igado, pork liver and other innards mixed with guisantes, or green peas. We decided to taste gamet, the expensive seaweed that was cooked with shellfish. And to make our meal complete, we had very good carrot cake served with grated fresh carrots.

Rodriguez had food good for triple the number of us who were there. Apart from pakbet and pizza, we had a huge chaffing dish of pochero, beef shin in tomato sauce with cabbage among the vegetables and potatoes. There was also sinanglaw, boiled beef innards sliced, served as soup and flavored with salt and Iloco vinegar.

There was imbaliktad, thinly sliced beef with the marrow of its spine boiled with onions and ginger with papait (bile) poured in, its name from the mixture being turned after one side is cooked.

Slices of bagnet were also served. And Rodriguez saw us off with boxes of his now famous chocolate cake which kept its quality and form all the way from Candon to Laoag and then to Manila, where those who tasted it couldn’t stop themselves from having another slice.

Lunch before leaving was at Shyne’s Foodhaus (F.R. Castro, Laoag) where we had insarabasab cooked medium rare—the way it should be, according to our Laoag guide, Jane Gaspar, whose family owns the place.

We tasted the family’s siniwsiwan, native chicken cut up into small pieces, boiled with bile and blood and some ginger, then spiked with siling labuyo (bird’s eye chili) and lots of sili leaves.

We thought that was our very last dish before flying off, but Blas gave us a peek at where he will relocate Saramsam, right where his Balay da Blas is (Giron Street). He had a full merienda waiting, but we only had space for the paridosdos, or guinataang halo halo with peanuts.