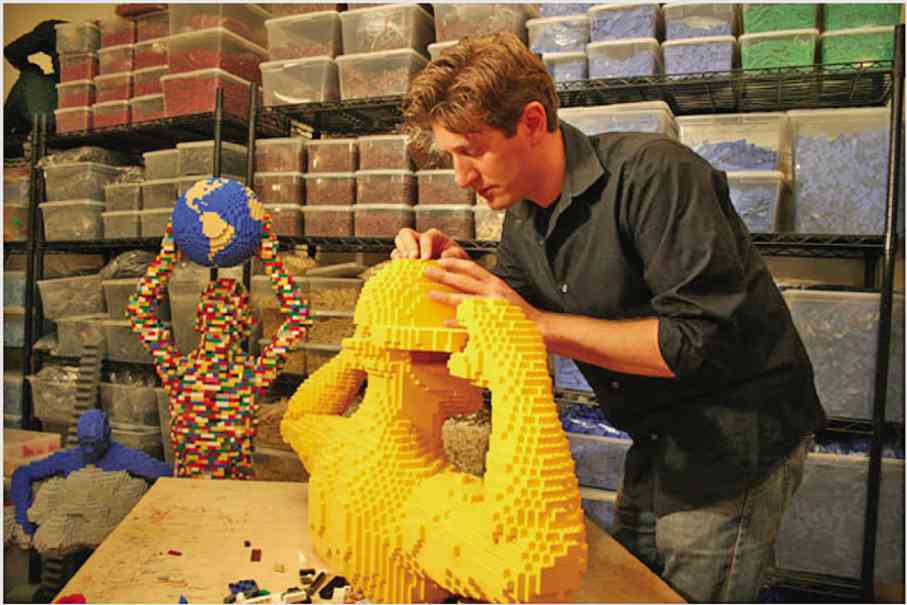 Touted as one of CNN’s Top 10 “Global must-see exhibitions” is the show of New York-based artist Nathan Sawaya, who thinks beyond the tiny Danish Lego bricks and transforms them into serious 2D and 3D art forms in “The Art of the Brick” at the ArtScience Museum in Marina Bay Sands, Singapore.

Feast your eyes on life-size sculptures—you’ll never think that all of these were made with mere Lego blocks. It boasts a massive collection, the largest by far with 52 sculptures, rendered in recognizable primary colors—the usual colors you get in Lego packs.

Sawaya is known for his “Hug Man,” a Lego sculpture of a man seen across New York City, humorously hugging park benches, signposts and every random piece of public property you can imagine. For his exhibit in Singapore, for publicity, or perhaps just to poke fun, he attached the “Hug Man” to one of the railings of the Double Helix Bridge, overlooking the Marina Center.

His work through the years has naturally enlivened mundane public spaces and elicited amused responses from curious bystanders.

The exhibit has eight sections, and as you go farther and farther into the rooms, you get a glimpse of the creative and emotional process of the artist. Aptly, he opens with his famous sculpture, “Yellow,” a half-bodied man tearing his chest open, with plastic yellow bricks falling out of the cavity.

He describes it: “Cathartic, opening oneself up to the world.” It represents his metamorphosis and his journey as an artist.

There is a story to the exhibit, in every art piece, which he captions with his thoughts and stories. Some you’ll find funny, inspiring and relatable, while others are bordering on cheesy. And interestingly, each work has the exact same brick count.

He has symbolic pieces like the “Peace Sign” and “Open Heart,” made from donated bricks. He captions the heart sculpture made of 1,856 bricks: “An open heart keeps nothing hidden. You can see it for what it is. You can even see right through it.”

There is a modern version of the iconic Pantheon, not as colossal as its original counterpart, but arresting nonetheless. Over the summer months, Sawaya painstakingly built a jaw-dropping Tyrannosaurus Rex, 20 feet in length. He hand-glued the skeleton brick by brick, totaling 80,000 pieces.

Sawaya also pays tribute to the host venue and builds an architectural structure of the ArtScience Museum.

We learn, too, from the exhibit that Sawaya used to be a corporate lawyer before becoming an artist. He narrates that he was more comfortable sitting on the floor than sitting in a boardroom and negotiating contracts. “My personal search for overall happiness paved the way to becoming a full-time working artist,” he stated.

The exhibit features strobe lights, smoke effects and techno beats to complete the overall experience. It also offers an interactive activity corner, like the reflexology path, where visitors can walk over bricks of different shapes and sizes. There’s a “fix it” wall, using a 2×2 brick, where one can pin messages on a studded wall, and suggest jokes and riddles for everyone’s enjoyment. There is also a play-and-build area, where you can sit down and build to your heart’s content.

On Saturdays, there’s an interesting workshop for everyone, including one for stop motion, where one can create a 15-second stop-motion film inspired by Lego bricks and other toy blocks. There’s also a workshop to create your own painting, with print patterns from Lego.

For those who grew up with Lego, here is an exhibit to rekindle your love for those playful plastic bricks. And even if you’re not a fan of all things Lego, this exhibit will engage the child in you to creatively imagine what we can build, putting one’s spatial skills to the test.

The Art of the Brick runs until April 14 at the ArtScience Museum in Marina Bay Sands, Singapore. For more information, visit www.marinabaysands.com/ArtScienceMuseum.

What’s the biggest art piece he has ever made?

Where do you get all your bricks?  I buy all of my bricks, just like everyone else.

How many bricks does a sculpture use? It depends on the size of the sculpture. A life-size human form sculpture typically has 15,000 to 25,000 bricks. A life-size ant takes less.

What is the biggest thing you have ever made? I made a Tyrannosaurus Rex skeleton which is 20 ft in length. I also made an entire advertising billboard that measured 15 ft high and 53 ft long, using more than 500,000 Lego pieces. And I made my ego, which is enormous.

What is the smallest thing you have ever built? A tree. It had one brown piece on the bottom, and one green piece on top. It was not my most impressive sculpture.

Where do you get your inspiration and ideas? Inspiration comes from everywhere. Often, my art is a reenactment of my own personal feelings. I’m inspired by my own experiences, emotions and the journeys I’m taking. Also, I surf the Internet.