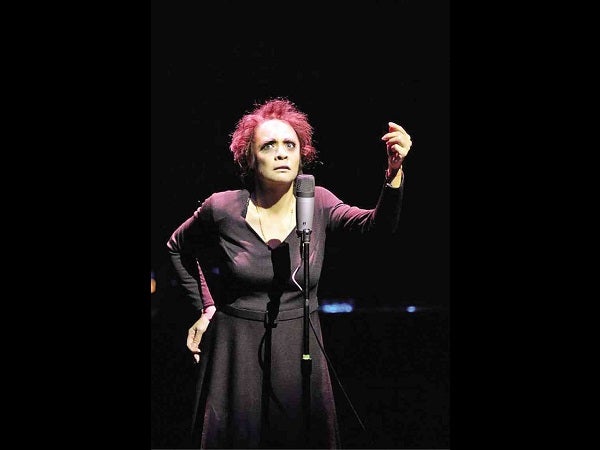 AMADOR fully embodies Piaf from her naïve, crude beginnings to her brash, wild peak, and then her fragile, withering last days

Pinky Amador is a powerful Piaf

In Atlantis Productions’ “Piaf,” audiences are greeted by a room made of wide, drab, wooden panels and crumbling shutters that reach the rafters, a visual metaphor for the vast, high-reaching yet damaged life of the play’s titular French chanteuse.

Atmospherically lit by Martin Esteva, Faust Peneyra’s set uses the same shutters to half-reveal and half-hide a red marquee sign with Piaf’s name. In other words—can we truly ever know the real Edith Piaf?

Fortunately, the glimpses that can be gleaned from her life is delivered in spades, thanks to Pinky Amador who portrays Edith Gassion, later named Piaf (sparrow), with an almost unbelievable force.

Amador fully embodies Piaf from her naïve, crude beginnings to her brash, wild peak, and then her fragile, withering last days—always exuding a strength of character that never wanes, even when Piaf becomes an invalid, both physically and emotionally.

And the singing! It feels as if Amador has swallowed a subwoofer and ten speakers, the way she volleys blasts of her powerful voice at the audience, especially in the final songs for both acts, “La Belle Histoire D’Amour” (Beautiful Love Story) and “Non, Je Ne Regrette Rien” (No, I Don’t Regret a Thing).

No English translations were provided for the lyrics, but even if audiences ne comprennent pas le français, there is no misunderstanding Amador’s emotive voice, overflowing with heartbreak and, always, defiance.

Directed by Atlantis’ artistic director Bobby Garcia, playwright Pam Gems’ protracted retelling of the singer’s life strains under its own sprawl. It clocks in at a little under three hours in an obsessive attempt to inventory the beauty and many tragedies of Piaf’s life. By the time the play gets to the nth boytoy/husband whom Piaf chews and spits out, the unending pain that she must have gone through begins to be shared by an audience whose patience is tested.

The vignettes of her life unfold via a fun, choreographed costume change done on stage and proceed to be punctuated by selections from Piaf’s discography, all accompanied by a piano-accordion duo led by musical director Ceejay Javier.

The cast fills in multiple roles to portray the many different men in her life in such short, thinly written encounters that they meld into an indistinct blur.

The show is not without moments of awkwardness: Strange sleeve lengths, especially glaring on Raymond Asso (Mako Alonso), Piaf’s lyricist friend who was ironically very concerned about her appearance; and prolonged scene changes involving a lot of chairs being moved about and costumes being put on stage.

There’s also a surreal, bewildering scene where all the male actors take off their shirts behind lit scrims while Piaf sings “Heaven Have Mercy”!

Awkwardness also emerges due to inconsistent accents. Amador uses an almost American twang, but at least sticks to it throughout the show. Going by this premise, all the French characters should be speaking with this same accent. However, all sorts of accents fly about with the sparrow.

Nonetheless, there are scenes spread throughout for audiences to perch on. Jamie Wilson makes for a gentle, sturdy Louis Leplee (Piaf’s discoverer); Hans Eckstein as the love of her life, boxer Marcel Cerdan, is a deserved quiet break from the frenzy around Piaf; and Reuben Uy is a tender presence as her devoted friend Charles Aznavour.

Gems balances out the many male influences in Piaf’s life by highlighting strong friendships with her lifelong chum Toine (a funny Ima Castro) and show biz colleague Marlene Dietrich (a capable Giselle Töngi-Walters in her theater debut).

It is, in the end, really Amador’s show, evidenced by her ebullience when she sings the chanteuse’s signature song “La Vie En Rose” (Life in Rosy Hues), while embodying all the anguish from the sharp thorns that came with such a life.

In the same way that the real Piaf had an unapologetic, voracious appetite for life (and alcohol, painkillers and men), Amador devours this role completely.