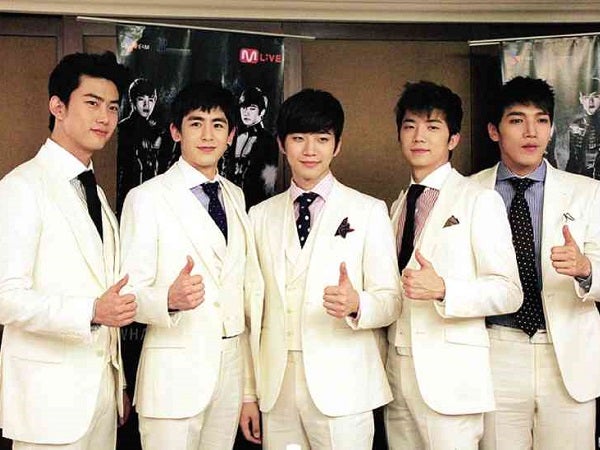 Late Friday afternoon, the members of 2PM greeted the Filipino media with prim smiles and waves, the occasional giddy shrieks echoing outside Manila Hotel’s Sampaguita room. In front of the cameras, the “beastly idols” of K-pop cut quite dashing figures in white three-piece suits that hid their notoriously toned torsos. But off-cam, the twentysomething gentlemen were more like playful young pups, just as cute, and maybe twice as naughty.

While three of them were trying out Filipino phrases, the two English-speaking members were busy making our noses bleed with their “innocent” banter about what they like to wear during their free time.

“Nothing,” said resident rapper Taecyeon with a Cheshire cat grin, but backtracked when he caught the wide-eyed looks on everyone’s faces. “Don’t write that down! I mean, I just like something comfortable,” he amended. “Maybe like training pants and long-sleeved shirts. Sometimes I don’t put my shirt on when I’m at home…”

“You don’t have to say that,” Thai member Nichkhun interjected, eliciting more bemused giggles from the panel.

“Your free time is when you go out, not just when you stay home,” added Nichkhun.

Taecyeon digested this for a moment. “Oh, okay. Well, I don’t really go out…”

“’Cause you wear nothing,” Nichkhun muttered while the others snickered, completely oblivious to the fact that the ladies in the room were trying very hard not to melt at the thought. Really, conversations just couldn’t get any hotter than this.

Super and five other members of the press sat down with the phenomenal boy band in a 30-minute interview session, the day before the Manila leg of its “What Time Is It?” tour.

Minus group maknae (youngest member) Chansung, who was still filming in South Korea that day, the five showed us another side of 2PM that has endeared them to K-pop fans around the world.

With idol groups coming to Manila on a regular basis, it’s hard not to get caught in the so-called hallyu or Korean wave that’s sweeping across the globe. Especially when the idols happen to be as warm and candid as these boys seemed to be.

Scouted by Park Jin Young, founder of JYP Entertainment (Wonder Girls), the boys attracted fans for their slick acrobatic dance moves and their scowling, shirtless figures on countless posters, not to mention the kilig-inducing fan service they’ve been known to dish out during live shows.

“It’s been really hard because people expect us to rip off our shirts and stuff,” Nichkhun admitted wryly. “We have to keep in shape all the time …”

2PM has released only three studio albums since its 2008 debut, with a few singles and EPs to fill the two-year gaps, but its impact on the K-pop community continues to overwhelm. The group is still riding high in Forbes Korea’s “Power Celebrity 40” list this year, along with massive boy bands Big Bang and Super Junior.

The group’s latest Japanese release, “Legend of 2PM,” shot to No. 1 on the Oricon music charts after hitting the shelves last Feb. 13. Fans have been clamoring for a follow-up to its 2011 Korean album “Hands Up”; this yet-untitled release is expected to drop “soon.”

According to Taecyeon, all 2PM members have been honing their songwriting skills for their coming album. “From the looks of it, it’s gonna be very dynamic. It seems like we have upgraded our levels as not just idols but more mature men-artists—so it’s gonna have a somewhat different feel from what we usually gave before.

“We’ll be probably showing you different solo activities within this year,” he also revealed.

In fact, the boys of 2PM have begun branching out in between group projects. Wooyoung’s solo minialbum “23, Male, Single” was released mid-2012, while Junho did the Chinese soundtrack “Undefeated” with F4 member Vanness Wu for the latter’s new TV drama.

With their imminent evolution, do they still want to maintain their original beastly image?

For Nichkhun, it’s a yes. “We’re gonna keep it and we’re gonna work hard to keep it. We’re gonna stay firm and fit, and hope we don’t get hurt. And wear some clothes at home, Taec,” he added with a mock-stern glance at his sheepish brother.

Not that anyone’s complaining.

Even if it’s their first trip to the country as a group, a few things had already made quite an impression on them. “Mahal na halo-halo,” Jun. K declared, looking quite pleased with himself. We’re still not sure whether he means that he already loves the Pinoy counterpart of their shaved ice dessert, patbingsu, or that the halo-halo he’s tried was expensive. Nice try, though.

“Mahal kita,” intoned Wooyoung, which would have had more impact if he had been looking at us ladies rather than at the table.

A man of few words, Junho only had one thing on his agenda: “Boracay,” he said simply, then added that he was determined to go the famed white sand beach someday, even if he had to go by himself.

Nichkhun, meanwhile, wanted something more adventurous. “I’d like to walk the streets of Manila and eat street food,” the returning visitor enthused, rising halfway from his seat in excitement. “I don’t know if I can eat it, but I’d really like to see what balut looks like. Is it good? I heard it’s really good for your health.” “It’s an aphrodisiac,” we replied, and Nichkhun’s puppy-dog eyes lit up. “Ohh. Then let me try it!”

Sadly, these plans would have to wait. With their tight schedules, these hardworking boys don’t have time for a real break, be it here in Manila or back home. “We’ve always been busy, so we can never think of what to do when we have free time,” Jun. K said. “Some of the members compose songs, some work out, some take lessons. So, it’s not really resting—it’s more like time for improvement.” Nichkhun explained.

What they really want to do? “Party!” Taecyeon piped in, drawing laughter. “If we have maybe a week or two, we would actually go travel somewhere, but we haven’t had that kind of vacation time for a while now. If there’s any time, we would actually spend it on what we love, like being with family…”

“…And you know we’d come to the Philippines. Boracay, right?” Nichkhun nudged Junho, who nodded firmly in response.

WHEN asked who their idols were, Jun. K surprised us by answering in straight English. “Wooyoung’s idol is Michael Jackson,” he teased his seatmate, who vigorously shook his head. “I love Jamie Foxx, but I think R. Kelly’s better. Ah, Donny Hathaway is better!”

“Uh…Michael Jackson,” Wooyoung replied, looking disgruntled as the others laughed.

“My parents,” Nichkhun said fondly, with a collective “awww” from the panel.

“Yeah, I was gonna say my parents, but he said it first,” Taecyeon grumbled, “so I’ll say, JYP.”

“He’s lying!” The other four exclaimed in unison, and the beleaguered rapper turned to us in dismay. “Is that on the record?!”

We got inside their heads; let’s have a look inside their bags. The top three items they carry with them all the time?

“No, not a charger. A pen.” “Pen-da,” Taecyeon joked, and everyone tittered. “Panda” is Jun. K’s nickname, referring to his obsession with the animal.

“A picture of my family,” Nichkhun began, eliciting more “awwws” from the panel. “A first-aid kit, candies.”

After six years of “growing up” together, the members have become more than friends—they’re more like  brothers.

Aside from family and friends, they have each other to keep them grounded. “They  tell me who I am, where I came from, and where I am,” Taecyeon said. “All the pressure from being an idol and the uncertainty of our future may kind of sound depressing, but they give me the strength to keep going and move forward.”

“We kind of warn each other when we’re getting out of line,” Nichkhun continued. “We look out for each other.”

If they could go back in time, what would they tell their 2008 selves?

“‘You have finally achieved what you’ve wanted all your life,’ because I’ve really wanted to be a singer since I was young,” said Jun. K.

“I would tell him that he’s not in this position right now if it was not for the other members. So, I always appreciate all the members for all the encouragement I am getting from them. Thank you!” Wooyoung said, bowing to his brothers.

“’Don’t lose focus,’” Junho replied. “I have such a busy life, sometimes I forget what I’ve been doing.”

“Work harder, be more humble, and treat the staff and people around me better,” Nichkhun mused. “And to love myself more—do things that I want to do, not just things people want me to do. To do things for myself.”

Taecyeon saved the best for last. “I would say to myself, ‘Dress better,’” he  said with a rueful grin, and we all burst into laughter for the nth time that hot, hot afternoon.