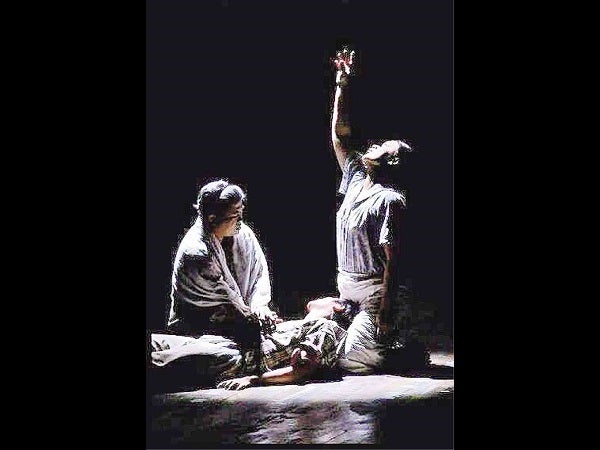 SCENE from the 2004 staging of “Himala, The Musical” at CCP Little Theater

Man-made miracles do happen and if there’s one person who knows this, it’s composer-music arranger-singer-actor-playwright Vincent de Jesus. Just last night, despite great odds, his co-written opus with Ricky Lee, “Himala, the Musical,” was restaged again to celebrate its 10th anniversary.

To think that about three weeks ago, the original chorale hired for the event backed out, while De Jesus had to shuttle back and forth from a location shoot in Calatagan, Batangas to the Peta Theater Center in Quezon City, where rehearsals took place. In between, he was finishing musical scores as part of his day job for a few TV productions.

Still, by some miracle, everything fell into place for “Himala, the 10th Anniversary Celebration of the Musical.”

“The musical is about faith and faithlessness—how Filipinos, in times of trouble, turn to religion for comfort,” De Jesus said. The musical, based on Ishmael Bernal’s classic film that starred Nora Aunor, was a critical and commercial success when it was first staged at the 220-seat Experimental Theater (Huseng Batute) of the Cultural Center of the Philippines in 2003 as part of Tanghalang Pilipino’s 20th season.

It was restaged the following year in a bigger venue, the 413-seat Little Theater (Tanghalang Aurelio Tolentino). And in 2008, it was brought to Shanghai, China as the Philippine representative to the Shanghai International Theater Festival.

The final song in the musical, “Waláng Himala,” was also featured in CCP’s gala 40th Anniversary Concert “Rubies,” performed by mezzo-soprano Clarissa Ocampo with the Philippine Philharmonic Orchestra under the baton of Chino Toledo.

The original plan was to re-stage the musical about three years ago, but problems ensued, especially funding. Actors Isay Alvarez and Robert Seña, Cynthia and Lionel Guico, May Bayot (the original Elsa in the musical), Jay Cruz, Melvin Lee and De Jesus decided to form their own independent group called Pinoy Renaissance Project to remount, this time, “Himala The Musical” as a dance-opera.

“Unfortunately, May Bayot had health concerns that time so it didn’t push through. Last year, Jed Balsamo—our pianist, piano arranger and assistant musical director—and I had a conversation and thought ‘Why don’t we do it now?’ I talked to the original cast and they were excited to do it again,” said De Jesus.

For this year, though not part of the original season lineup by the Philippine Educational Theater Association, Peta’s artistic director Maribel Legarda liked the idea and offered to have Peta co-present it with a new producer, Touchworx Group.

“We also decided to mount it as a dramatized concert, focusing on the singing,” said De Jesus.

“Though most of the songs are not particularly ‘hummable,’ because they weren’t composed for that reason, they are songs which breathe life into the characters, weave the emotional thread of the play, underscore the meaning of the text and reinforce the space and the rhythm of the musical,” said De Jesus.

From the final shooting script, De Jesus transformed Lee’s original text into lyrics that fit his musical score. He came up with about 26 songs.

For the 10th anniversary version, De Jesus said he had more inputs in the chorus parts. “I made improvements in the arrangements of some songs while others were updated and tweaked. But, as a whole, the score is still very much the same, only better.”

On the side, another dream project has also materialized: the 22-track “Himala, The Musical” original cast recording double-CD album. There’s also the songbook, so fans of the musical and aspiring singers could sing them in parties or “during auditions.” Both are available in limited copies during the two-weekend run until March 24.

The eight shows are also products of some divine intervention. De Jesus explained that it was difficult to gather the cast, so there were supposed to be only two shows for the anniversary.  But two more dates were added. And when Touchworx came in, it stretched to eight shows.

Bayot still plays the lead role of Elsa with no alternate. De Jesus said he sees no other actress who could play the part.

“She is one of the most passionate actors I’ve ever worked with,” he pointed out. “She doesn’t hold back when she performs. I’ve worked with her many times. She has a powerful voice and she sings with her soul. Hindi ko maalala na namaos siya, ever (I don’t recall a time when she lost her voice).”

Most of the original cast is also joining this 10th anniversary staging: Isay Alvarez as Nimia, Cynthia Guico as Chayong, Dulce and Mia Bolanos alternating as Nanay Saling, Melvin Lee and Lionel Guico alternating as the priest.

The original ensemble will also be present, plus new cast members that include Kalila Aguilos alternating as Nimia; Myke Salomon as Pilo, who has no alternate; and OJ Mariano, who will be playing Orly the filmmaker (Eladio Pamaran played the part in the 2003-2004 stagings) with no alternate.

Even the original artistic staff members are back: Gino Gonzales as production designer, Jonjon Villareal as lighting designer, Soxie Topacio as stage director. The original choreographer, Jay Cruz, acts as dance consultant, with Carlon Matobato as the new choreographer.

De Jesus said that a professional chorale will sing the part of the “taumbayan.” He recounted talking to a chorale group as early as last year and they said yes to the project. Sadly, a few weeks before the performance, the chorale backed out. Luckily, with the help of some friends, De Jesus got Viva Voce and the UST Singers Alumni.

In all, De Jesus said there are more than 50 people involved in this production.

The success of the production, he said, is due to the musical having grown close to the hearts of everyone in the cast. Friendships developed in the course of the productions and the cast members were driven to tears while singing the songs.

De Jesus said that this was probably due to the personal nature of the lyrics. “Hindi puwedeng kantahin nang walang emotional investment kasi halatang-halata.”

The music is raw and highly emotional, melodic and discordant, De Jesus said, pointing out that it has a very Pinoy flavor and is quite different from the Broadway template. “Hindi siya formula musical.”

In most contemporary musicals, he noted, “One could hear the almost predictable formula: the lyrical pop ballad goes to the beautiful heroine, the ‘Sturm und Drang’ solo goes to the antagonist, while the riotous number goes to the clown.”

De Jesus said he tried hard to avoid such musical stereotyping in “Himala,” evading “musical traps” that composers like him usually fall into.