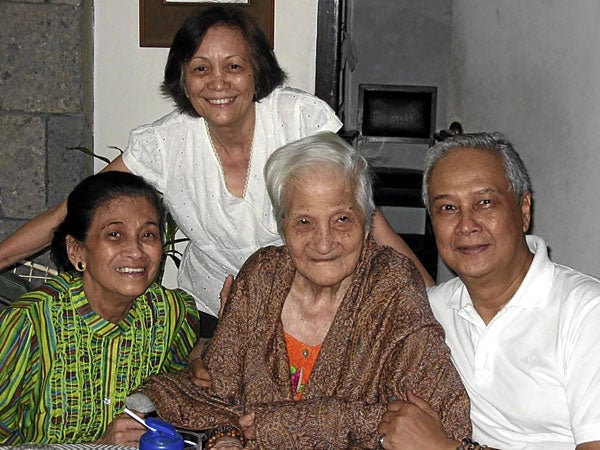 Flanked by children Sylvia and Johnny, with the author (standing behind). Taken in March 2010 at 99

One Hundred Years of Gratitude

WHAT is it like to live for a hundred years?

The question has been on my mind as we anticipate my mother’s hundredth birthday on October 26. Born in 1911, Lourdes Grajo-Hubilla has seen and experienced a lifetime of changes. I look back and wonder how all that add up to the woman that she has now become.

Hers was a world of prayer as a young child.  Her aunt, Nana Oling Grajo, would kneel and pray even in the wee hours of the morning, and the little girl would follow, often falling back asleep wrapped up in her aunt’s saya. No wonder prayer became the centering guide in my mother’s life.

Growing up during the American Occupation meant learning English from an American teacher, and later from the German Benedictine sisters of the St. Agnes Academy in Albay. High grades qualified my mother to become a second grade teacher that in turn trained her to be punctual. “A teacher is born, not made,” she used to say.

Life as a young woman in the 1930s meant a constant whirl of bailes or formal dances. Like Cinderella, midnight was the witching hour when decent ladies were expected home. But my mother resisted the curfew and would always urge her   partner to dance away from her father’s searching eyes. Don Leoncio Grajo, a lawyer and member of the Fifth Philippine Assembly cast a tall and formidable figure with his cane. He owned the only Ford automobile in the whole town that was often borrowed for weddings. A wealthy cousin flew his own plane. It must have seemed like a scene straight out of a Hollywood movie!

But life for Lourdes Grajo changed inevitably when she met the handsome and dapper Gene Hubilla from the nearby town of Casiguran.   A novena to San Jose, patron saint of good husbands, from whom she asked for a sign that this was The One, convinced her to tie the knot with him on May 11, 1940.   She was 28, a year older than him.

When World War II broke out, she was a young mom with a 9-month-old toddler. The young family waited out the war in their home in Sta. Ana, Manila, where they survived on sweet potatoes, vegetables and prayers.

My parents hardly talked about the war, though a bullet hole on the floor constantly reminded me, my sister and two brothers about it.  There was also an air raid shelter under the stairs where we hid. “I carried you in one arm and the Sacred Heart in the other,” my mother often told me.  The Sacred Heart was the center of our home and remains so to this day.

Thanks to two aunts who lived with us, my mother managed to go back to work after the war.  To get to her job at the Malacañang Library, she had to walk all the way and cross the Pasig River on the “pontoon bridge,” a floating bridge made of rubber rafts.

In the ’50s, life was relatively easy. My father started the yellow pages for PLDT and had several radio shows, while my mother   was then working for the Ponce Enrile Law Office in Escolta as a librarian.  Lunch also meant a daily mass at the nearby Sta. Cruz church.  As if she didn’t have enough on her plate, my  young mother   even found time to study optometry in the evenings and pass the board.

With a comfortable life came some indulgences. As there were no RTWs yet, mother had her own dressmaker and a jeweler, although she wasn’t into gadgets. I never saw her use the camera, or the record player.

In the late ’60s, my parents saw us graduate and get married. Retired at 65, mother went about sewing anything and everything around the house. She volunteered to fix our growing library, cataloguing the books by authors and titles.   She read voraciously and wrote many letters in her beautiful handwriting.  Her sharp memory easily recalled the birthdates, wedding and death anniversaries of most people she knew well into her nineties.

The ’70s saw us traveling to Europe on a pilgrimage, visiting Fatima, Lourdes and Rome.  Paris was where my parents celebrated their 35th wedding anniversary, before we continued on to Amsterdam, Brussels, England and the US.

In the ’80s, the then elderly couple settled back in Juban, Sorsogon, in the house where my mother was born. This is probably what Mother “dreams” of lately when she says she wants to go home. Built by my grandfather in 1901, the heritage house is now called “Casa Feliz,” a quaint bed and breakfast for travellers.

In her late sixties, my mother underwent radium and cobalt therapy for an inoperable mass in the cervix. Thank God, it has not recurred. I attribute this to her prayers.

My parents celebrated their golden wedding anniversary in 1990, the year my father was diagnosed to have Parkinson’s disease.  Three years later, he died in his sleep.   After that, mother’s Sunday routine included a visit to his grave.

It took my husband and me two years to convince her to stay with us. Fortunately, the Sisters Disciples of the Holy Eucharist opened an adoration chapel near our house. My mother was elated. Now she could go and adore the Eucharist every day. She moved in with us in 1996 when she 85. She would often tell us how she misses my father and how he visits her in her dreams. Now that I’m a widow myself, I find this so true and I tell my mother she is right.

As times and our lives change, so has my mother’s perception of social norms.  “Iba na ngayon [times are different now],” she would say, to explain why she condones unchaperoned dates for her apos (grandchildren).

Well into her eighties and nineties, my mother had a daily exercise of walking “100 steps” to the chapel at the next corner, refusing to use a cane until she felt she needed it. Life remained full – with car rides, visits to relatives, shopping at the stores she used to patronize like Catholic Trade, and birthday celebrations shared with the less fortunate. I remember how she would bring goodies and rosaries to the Golden Acres and orphanages, and write checks for her favorite charities and seminaries.

She still had a sharp memory, keeping an accounting of her expenses and using mental math while I had to use a calculator.  For my mother, everything was “cuentas claras. Kung bigay, bigay. Kung utang, utang [crystal clear – a gift is a gift, a loan is a loan].”  She remained honest in her dealings, sometimes to the point of being too frank for comfort.

Until her 94th birthday in 2005, my mother kept a diary that was addressed to God and Mary. She believes there is nothing that cannot be answered by the power of prayer, unless God wills otherwise. She used to pray the rosary several times a day using different kinds of beads. My daughter made bigger prints of her prayers as my mother’s eyes started failing her. But she didn’t give up reading, even if she had to use a magnifying glass.

She’s not old, not by a long shot, she insists, even if she can hardly hear and would refuse phone calls on mobile gadgets for this reason. “How can I hear?  Ang liit liit niyan [that is too small],” she would complain. Yet, she resisted having a  hearing aid. “Baka sabihin ang tanda tanda ko na [People might think I’m old],” she protested to our amused shock.

But she had to concede to wearing adult diapers when age and infirmity made them a necessity.

When she could no longer walk to the chapel, she used her wheelchair. The kind sisters offered to visit her every Sunday and give her Holy Communion. Could they come everyday, she requested, and they obliged.  She used to “hear” Mass on TV on Sundays until her hearing failed her and she got tired of sitting.

Nowadays, she’s too weak to get out of bed. We bought her a hospital bed to make it easier for her to sit up as she dislikes sitting in a wheelchair. Lucky for us, she can still move from side to side, which explains why she doesn’t have bedsores. Like she took care of us, my siblings and I now take care of her.  My US-based siblings send her no-rinse shampoo and body wash and lots of lotion for her very dry skin, while our eldest brother Johnny visits her often.

On October 26, she will be 100. She seems a little smaller and thinner and hardly recognizes anyone. Rarely does she open her eyes. “Holy God!” she would sigh intermittently. Her gentle caregiver Nining thinks she is asking for food every time she utters this, although sometimes she asks specifically for water or pancit.

Mother used to ask, “Is this dinner or breakfast? Did I eat already?” She’s like a baby now. Eating every two hours and sleeping. She is not ill, just very old.

She still loves to sing. We printed out her songbook of English and Spanish songs and we’d sing along. Her caregiver updates her on the news so she knows about Pacquiao and Ondoy.  I update her about the family. She still has a sense of humor, and shares a good laugh every now and then.  Some time after her 96th birthday, she showed symptoms of having Alzheimer’s disease.

She had bouts of hyperactivity when she would talk incessantly for two days without sleeping. She would talk to people long dead and entertained “guests” who seemed very real to her. Alarmed, we consulted a gerontologist.

On a rare day, Mother opened her eyes and smiled. “Nene?” she called, using my pet name. I looked into her eyes and wondered if she could see. “Opo [Yes]” I shouted into her left ear, “I love you Ma!” She nodded and smiled again. I think she recognized me. That made my day.

And so this is one life being lived for almost a hundred years. I am so glad to be part of it.