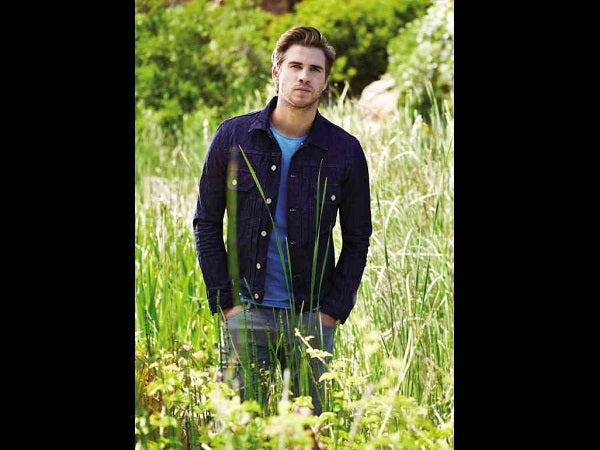 “Do you have any idea how many fans you have in the Philippines?” I asked Liam Hemsworth minutes before his Bench press conference started last Friday.

“Oh, you’re going to be surprised.”

Outside, teenage girls had already invaded the lobby of the Manila Peninsula in hopes of seeing the “Hunger Games” star. Liam didn’t have to wait long to find out just how big his Filipino fan base is. Screams and shrieks greeted him as he walked into the Rigodon Ballroom, wearing a blue Bench shirt with the words “Think Earth,” Bench jeans and rocking silver bracelets on his right wrist.

Bench CEO Ben Chan said, “Why Liam? We believe in his talent. He’s not an upcoming star, he’s already there. He’s doing so many projects. We’re very happy he accepted this endorsement.”

Inspired by his older brothers, Liam decided to pursue acting when he was 16, taking acting lessons and kicking off his career with guest roles on Australian TV before moving on to Hollywood and starring in films such as “The Expendables” 2, “The Last Song” and the highly successful “The Hunger Games,” which hit theaters last year.

This year is bound to be an even bigger one for Liam. “Catching Fire,” the sequel to “The Hunger Games,” is set to come out later this year, with his two other films—“Empire State” with Dwayne Johnson and “Paranoia” with Harrison Ford and Gary Oldman.

“I love making movies, I get to work with great passionate people and different artists. I’ve been kind of addicted to the whole process. I feel very, very lucky to be where I am,” he said.

Liam had flown to Manila after a 10-day visit to his native Australia, a respite from Hollywood craziness and rumors of his breakup with fiancée Miley Cyrus.

In an exclusive interview with Lifestyle, he said, “I’m extremely happy to be here. I just arrived so I haven’t seen much yet but I hear the beaches are beautiful. I’m gonna spend a few days here and try and see some of the coastline and possibly the mountains. I heard the mountains are beautiful, too. I’m trying to do as much as I can.”

While Liam intended to spend the rest of his time in the country exploring, Friday was devoted to his fans. He had two meet-and-greet sessions scheduled that night, one at the SM Mall of Asia and another at Glorietta.

Liam, who said he grew up in Australia wearing “wetsuits, jeans and flip-flops,” is a perfect match for Bench.

“I think their clothes are great. I’m a pretty casual kind of guy, I like to keep it simple. Bench’s stuff is casual but has a creative flair to it, which I like. I feel comfortable in their clothing and the clothing fits really good. The jeans are great, it’s good stuff.”

Because his style is super-casual, Liam relies on his friend Paris to pick out his clothes for red-carpet events.

“He helps me with the classier things. It’s not really something I know too much about. It’s completely out of my depth.”

Is there anything he’d never wear? “Probably a pink suit.”

Fans first saw Liam wearing Bench pieces in billboards, which feature him and a majestic and fierce-looking lion.

“That was shot in LA, up behind Malibu, kind of in the mountains. I spent half a day with the lion, which was great fun. That’s something not a lot of people get to do, hang out with a big, live lion all day,” he said, laughing.

Another thing not a lot of people get to do is star in a blockbuster book-to-movie franchise. Liam, who plays Gale in “The Hunger Games” films, said he just wrapped his scenes for “Catching Fire.”

“Gale gets to do a lot of hunting. He also gets whipped in this one, so I spent a couple of days on my knees being whipped, which was pretty horrific.”

“She’s amazing. She’s one of the most energetic people I’ve met. Working with her is just easy,” he said.

Having brothers in the same industry is a blessing, he added. His brother Luke is a TV actor in Australia, while superhero-movie fans know his brother Chris as Thor.

“As the youngest brother, I was able to ask them questions. A lot of people have a harder way of going into it because they don’t have people to teach them what it’s really like and how to go about certain things, so I was really lucky to have them.”

But they can get competitive, too. When another journalist asked Liam which superhero he’d like to play, he joked, “Which one can beat up Thor?”

Liam said he’s fallen in love with the magic of making movies.

“I look for the scripts that are interesting and hopefully surprise audiences and give them something new to watch. I also look for directors who are passionate about what they’re doing.”

As 50 lucky fans lined up to have their photos taken with the Hollywood hunk after the press conference, a group of girls screamed, “You’re perfect!”

“You’re perfect,” he mouthed back, smiling and pointing at them.