‘I want the Filipino people to be more proud of themselves’: ADB ‘First Lady’ bids goodbye–for now–to the country she loves dearly | Inquirer Lifestyle 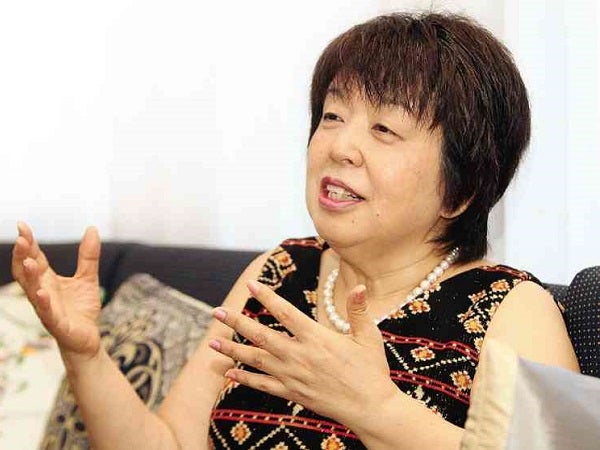 ‘I want the Filipino people to be more proud of themselves’: ADB ‘First Lady’ bids goodbye–for now–to the country she loves dearly

Submitting to an interview—just before she and her husband (Asian Development Bank president Haruhiko Kuroda) were to formally call on President Benigno Aquino III at Malacañang—is indicative of how Kumiko Kuroda fills her hours with well-orchestrated activity.

The evening before, the couple had entertained over a hundred of their closest Filipino friends at dinner in their Forbes Park home. She had also hosted lunch that day for over 30 ADB ladies. She played the recorder for them and rendered a ballroom dance.

Was she tired? Not in the least bit. Not Wonder Woman. “They give me energy. After a party, I always feel stronger. My husband and I love people. That is our hobby,” she said.

They return to Tokyo in a few days, where the Diet is expected to confirm his appointment as chief of the Bank of Japan, that country’s central bank.

The diversity of their friends’ backgrounds is kaleidoscopic, hinting at the couple’s own varied interests.

At one table of the “closest Filipino friends” dinner, Tereret Tambunting Liboro talked about their ballroom dancing circle, where Kumiko is said to fly “through the air with the greatest of ease” and grace.

At the same table, former Central Bank governor Jaime Laya and lawyer Ditas Cojuangco Teodoro reminisced about the 1978 to 1986 Batasang Pambansa. Still a patrician beauty in her senior years, Ditas is the widow of Gilberto Teodoro, who as steward of the Social Security System, grew to billions its contributors’ hard-earned pesos.

The Aquino sisters Ballsy, Viel and Pinky are close friends of the couple, though they weren’t there that night. But Greggy and Irene Marcos Araneta were, delighting to a recorder (Kumiko) and piano (Tess Salientes) duet of “Dahil sa Iyo.”

Kumiko says of the contrasts: “We are very neutral. If they are so good in person,” that is all that matters.

A good-hearted person herself, she surprised a friend in the throes of moving house by trudging up her staircase uninvited. “I want to help,” she said, promptly getting down on her hands and knees to help sort out the mess.

After all the paintings had been hung in the living room, a large panel in the dining room remained blank.

“Please leave this space for me,” she announced. A couple of days later, along came her driver with a lovely Indian tapestry. The grand piano also received a present: a gorgeous obi which she draped over the piano top.

Washington SyCip, SGV’s “wise old owl” chairman emeritus, told a friend that “Mr. and Ms Kuroda have contributed greatly not only to the ADB but to the welfare of Asia. They have made many, many friends in their eight-plus years in the Philippines, and we would all welcome them back on any vacation they may be taking in this region. I am confident that Mr. Kuroda, as the head of Bank of Japan, will greatly contribute to improving their economy.”

He felt so comfortable with them that he came in a summery yellow shirt printed with little red flowers, a distant cry from his signature Taipan silk dinner wear. He has asked a Kumiko buddy to give him “her bona fides” so he can find an excuse to have her visit Manila.

Next to him and Haruhiko sat Oscar and Connie Lopez, who was teary-eyed while bear-hugging Kumiko goodbye—also untypical of the highly dignified, shy lady.

But that is what Kumiko and Haruhiko elicit from their 100-or-so best Filipino friends—much sadness that they are leaving.

Away from fun and games, Kumiko rued that “There are so many disasters here.” Traveling to Bicol a few years ago with Toni Yulo Loyzaga to visit typhoon victims, and armed with pots, pans and blankets for them, the ladies were dumbstruck at the extent of the devastation.

Still, “In Tiwi, there was no electricity. It was dark, but still, the weavers wanted to show us their work, as did the seaweed farmers,” said Kumiko.

“Their seaweed farms were totally damaged, but still, they tried to show us what they were doing. Always, they showed their positive side, always smiling.”

Toni wrote that “Kumiko sat and talked with the seaweed farmers about their farms and tasted the raw seaweed with full enthusiasm. She talked with community support workers and asked if she could offer some small personal support to help the farmers process the seaweed to create value-added products for local consumption and export.

“With that small fund, Tiwi began to make seaweed gulaman, seaweed pancit and other food products so they no longer have to sell the dried raw seaweed to traders in Sorsogon.”

In Naga, “even if they didn’t have enough food, they wanted to share it with us—a very old lifestyle that we (in developed countries) have already lost,” added Kumiko.

Again quoting Toni: “In the last four years, we have traveled through Ilocos Norte, Taal and back to Naga and Tiwi, this time with president Kuroda. While in Naga, we visited the Ateneo de Naga animation studio and sat with then Interior Secretary Jesse Robredo to discuss social programs and transparency and accountability in local governance.”

Two weeks ago, Kumiko motored to Calatagan with a friend for the opening of the Museo Enrique Zobel, initiated by his widow (and her friend) Dee Hora Zobel.

“Filipinos are always so good everywhere. All the overseas workers are ambassadors,” she said. They marry locals in a foreign country and embed themselves “deeply into that environment,” while imparting facets of their own culture.

In developed countries, she noted, “people walk around town with sad faces, always dark. They cannot love each other, broken families, grandfather and grandmother so lonely in their house, children so sad, mother and father working and not taking care of them.”

But here, “grandchildren always greet grandparents. No matter how big the family, they’re always together, in restaurants, atriums—almost always, they include grandparents.”

Among Kumiko’s other activities, in no particular order, are: painting sessions guided by her mentor, Joven Ignacio (the Kurodas have a collection of Filipino paintings including one by Araceli Limcaco Dans); Taebo boxing lessons; flamenco and ballroom dancing lessons (light as a feather!); guitar lessons; teaching recorder playing to eight Japanese ladies who, among other smaller concerts, have held three annual shows with Kumiko and her own professor, Kenji Kaneko, a famous TV artist and Japan’s top recorder musician; and playing  classical music (she on flute or recorder) with world-renowned neurosurgeon Dr. Camellia Posoncuy on the cello and a writer on the piano, until the latter two got too busy in their respective professions.

She then came across a very talented jazz pianist, Tess Salientes, in a Paco Market concert to celebrate a cleanup effort. They became instant friends and a musical duet. She’s a Math major in college, so it is no wonder Kumiko loves Mozart (precision counting, no romantic lollygagging along the way), though her musical tastes are eclectic.

Somewhere in the Philippines, somehow, she is constantly involved in fund-raising projects. Last week, it was with the ADB Spouses Association, during which she and her recorder students played to support scholarships for Don Bosco children, among other beneficiaries. It being their last concert together, their finale was a Japanese song her students surprised her with.

“We were playing with tears in our eyes,” she recalled.

More than helping disaster victims, she believes in saving lives. A past project had her putting together top Filipino artists, including pianist Greg Zuniega one year, and pianist Christine Coyiuto a year later, in  “Dog Day Afternoon” concerts.

Her friend, Reneé Speltz, whose husband Paul was US ambassador to the ADB, had formed The Philippine K-9 Search and Rescue Foundation, with Jejomar Erwin Binay (before he became mayor) appointed president by Reneé.

Training search-and-rescue dogs is extremely expensive, but both ladies, shoulder to the wheel—musical instruments in these cases—raised startup funds to train and US-certify Junjun Binay and Noel Lim’s three dogs.

Now, Kumiko, incidentally the mother of two male professionals and grandmother of three, is hell-bent on helping initiate a Disaster Education program in the Philippines for grade and high school students. This will be undertaken with Toni, who is executive director of the Manila Observatory (Padre Faura’s legacy), and a longtime preacher of disaster preparedness.

Japan’s experience, with schoolchildren having previously been trained, saved their grandparents in the earthquake-tsunami. But their untrained neighbors perished. High school kids there are also taught how to administer CPR (cardiac pulmonary resuscitation).

She also intends to devote some time to cross-cultural work, bringing her recorder teacher back—she had supplied him with Filipino fables which he is setting to music—and bring the Paco children and their Filipino teacher to a recorder competition in Japan.

So you see, Wash, Kumiko will return!

Her plans for what she will embark on in Japan are a blank page. When she lived there pre-ADB, among other activities, she held grief sessions for persons who had lost a loved one. She and other musicians would play for them in a darkened room, with cathartic effect.

“I don’t know what lies ahead,” says Kumiko. “My only plan is to visit the tsunami area to try to inspire them there. I don’t know what I can do, maybe very small. But if I can change one person’s (outlook), that will be enough for me.”

But “right now, I’m thinking only of my last few happy days in the Philippines,” she adds.

Wherever she is, however, she will always make it a point to cook all her husband’s meals, as she had done here.

Apart from being a proud bystander at her concerts and dance exhibitions, Haruhiko Kuroda, too, has accomplished quite a lot at the ADB.

A former colleague writes that among other things, he has seen to “ADB’s general capital increase which allows the bank to make more resources available to developing countries, including the Philippines.”

Also, his “focus on regional integration, better capital markets and support for private sector development, and successful management of an international organization.

“At the Bank of Japan, look for strong leadership on monetary policy in order to conquer endemic deflation.”

Bindu Lohani, vice president for Knowledge Management and Sustainable Development at the ADB, says, “Many of us have come to know him as a deep thinker, a voracious reader and a consensus builder. I personally have enjoyed and benefited tremendously from his thoughtful guidance, and have admired his easy and open style and collaborative approach.

“In fact, I like to say that he conveys his thoughts and decisions with a gentle touch, but always with a far-reaching impact. He adds that “Ms Kuroda has been an exceptional ambassador for ADB within her extensive network in both the Filipino and expat communities.”

Each in his and her own sphere of influence, but Kumiko concludes: “We are so happy here.”

But their 100-or-so close Filipino friends are sad and can hardly wait for their visit.