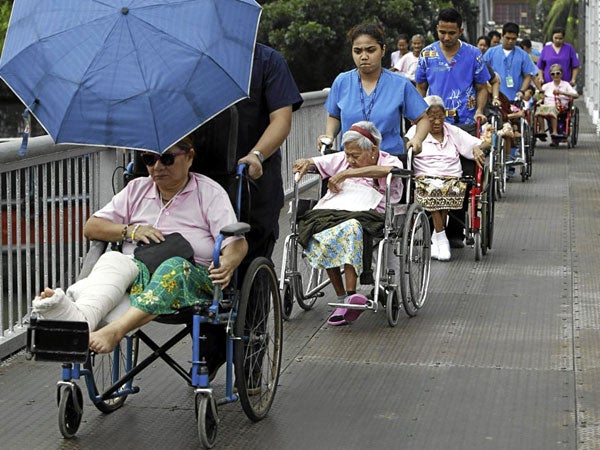 The “silver” market in the Philippines is turning out to be a gold mine just waiting to be fully tapped.

For one thing, the number of senior citizens or people 60 years and above is growing steadily, from an estimated seven million this year to close to nine million by 2015. And for another, these elderly folk have money saved up that they are willing and able to spend, not just on their maintenance medicine but also on goods and services that will allow them to make the most of their twilight years.

Unlike senior citizens of previous generations, today’s gray-haired, card-carrying seniors are more active and still strong enough to enjoy their retirement years. They are described as more financially independent and remain highly interested in trying out new developments in the fields of fashion, food, wellness and travel.

All these factors have combined to make the “silver” or “gray” market an increasingly important segment of the consumer-driven economy. Expectedly, a number of companies in the Philippines have responded to the needs of this special sector.

According to Rico Santos, Premium Category Marketing Manager of Mead Johnson Nutrition Phils., an estimated 4.3 percent of the Philippines’ population is over 65 years old. And similar to other developing markets in Asia, this age group is steadily growing and its spending power increasing.

“As the average annual household income progressively rises, the gray market’s capacity to spend also increases.  As such, there has been a surge in the number of new products like medicine and dietary supplements targetted at our aging population,” Santos said.

Mead Johnson Nutrition, however, has been in the gray market for some time through its Sustagen Premium, which was formulated over 20 years ago specifically for senior citizens but is now being marketed to all adults. Its sales pitch is that Sustagen Premium’s Multi Defense System helps fight body aging.

Santos noted that according to scientific tests on 6,000 adults between 30 and 50 years old, seven of 10 adults in the Philippines have bodies aging faster than their calendar age. This is due to a host of reasons, among them a bad diet, unhealthy lifestyle habits and severe lack of exercise.

Which is why Mead Johnson Nutrition has embarked on a campaign to make adults aware of this discrepancy between their body age and actual age, reminding seniors already counting the years before they kick the bucket that they can’t afford to have their body clock tick any faster.

Foremost of these are Enervon Prime, a health drink whose sales pitch is that it helps  boost memory since the decline in memory is one of the concerns of senior citizens; Skelan, which treats osteoarthritis and acute gout, and the RiteMed line, which includes low-priced prescription products for senior citizens with chronic diseases such as diabetes and hypertension.

Unilab Senior Vice President Jose Maria A. Ochave said the senior market is different from the other markets that Unilab caters to because of its special needs and capacity to pay.

“As we get older, we become more aware of the need to take care of the body because we can no longer physically do what we took for granted before. As we know, the body changes significantly as one grows older,” Ochave said.

“In addition, many senior citizens have already retired or have stopped working for various reasons so their capacity to pay has been reduced.  Hence, one has to ensure that products for them  not only take into account the difference in their body needs relative to the younger population, but they should also be provided at a lower price for  senior citizens to obtain maximum value,” he added.

Ochave said sales to senior citizens have been doing well, but there is still room for growth. “We have to continue engaging senior citizens to determine what they really need as opposed to what we think they need. We have to listen to them more.”

Cathy Turvill, who owns the award-winning Nurture Spa in Cavite, also believes that the senior market in the Philippines is not yet fully tapped. This presents a golden opportunity to investors considering that the aging population is a global megatrend, she observed.

“According to Global Reports (April 2011), the over 65s represent a share of almost 8 percent globally in 2010, with lower birth rates, better health and longer life expectancy leading to ageing populations and extended working lives,” Turvill said.

“In the Philippines, the seniors’ market has the potential to grow with the ‘tsunami of retirees’ from developed countries moving to countries like the Philippines in search of affordable retirement,” she added.

The Nurture Spa, which offers health, wellness and pampering packages targeting senior Filipinos, is benefiting from this trend. “We are pleasantly surprised to see that sales to this segment are growing, particularly during the holidays when balikbayans (returning Filipinos) frequent our spa. We also have brisk sales from gift certificates for anti-aging packages given as birthday or anniversary gifts by children to their parents,” Turvill said.

Their  anti-aging package  offers “a holistic and natural approach” to aging by combining wellness services like Qi breathing exercises, detoxification and nutrition, said Turvill.  There are also pampering services like Biodroga stem cell facials and Algortherm body products. The combination of these products and services, she said, helps the seniors achieve their goal of looking young and feeling vibrant both inside and outside.

“The silver market has saved money for retirement and is free to explore the world. Their obligations with regard to children’s education and home mortgages have already been fulfilled so they have the means to spend. However, this market has specific needs, which should be considered when developing products and services for them,” Turvill said.