Growing up in Frisco, Quezon City, in the ’60s, Gene de Loyola knew he had a dab hand sketching human figures and street scenes.

After school time, he would spend hours practicing and developing his skill, influenced by Braulio Dayao, an artist renowned for his landscape and portraiture works.

De Loyola’s friends began to notice his evolving technique, which was marked by a mix of soft hues and striking imagery. 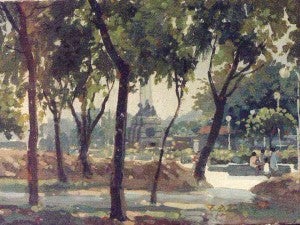 He was fresh out of college in 1969 when he sold his first major work, a reproduction of the “Mona Lisa,” to the owner of Glori Supermarket. The businessman was so impressed with De Loyola’s dexterous take on the famous painting that he had few qualms becoming its proud owner.

De Loyola found himself in the company of fellow artists during martial law. That period saw the emergence of artworks depicting the oppression and exploitation of ordinary people. Influenced by social realism, the artists formed Sining Binhi, which sought to define Filipino identity in art and culture.

He now owns the distinction of having four paintings hung permanently at the National Museum, where he has also restored a few masterpieces by older, departed peers.

His latest oeuvres train his mind’s eye on scenic depictions, which he has titled “Morabex” series.

He continues to draw admiration from his peers and the public with his appealing landscapes and portraitures. Last year he was invited to Germany and other European countries by art circles deeply impressed by the 56-year-old artisan who has four daughters equally well-versed in art and culture. Dick Malay