Contemporary artists aim for the ethereal and the enlightening | Inquirer Lifestyle ❮ ❯ 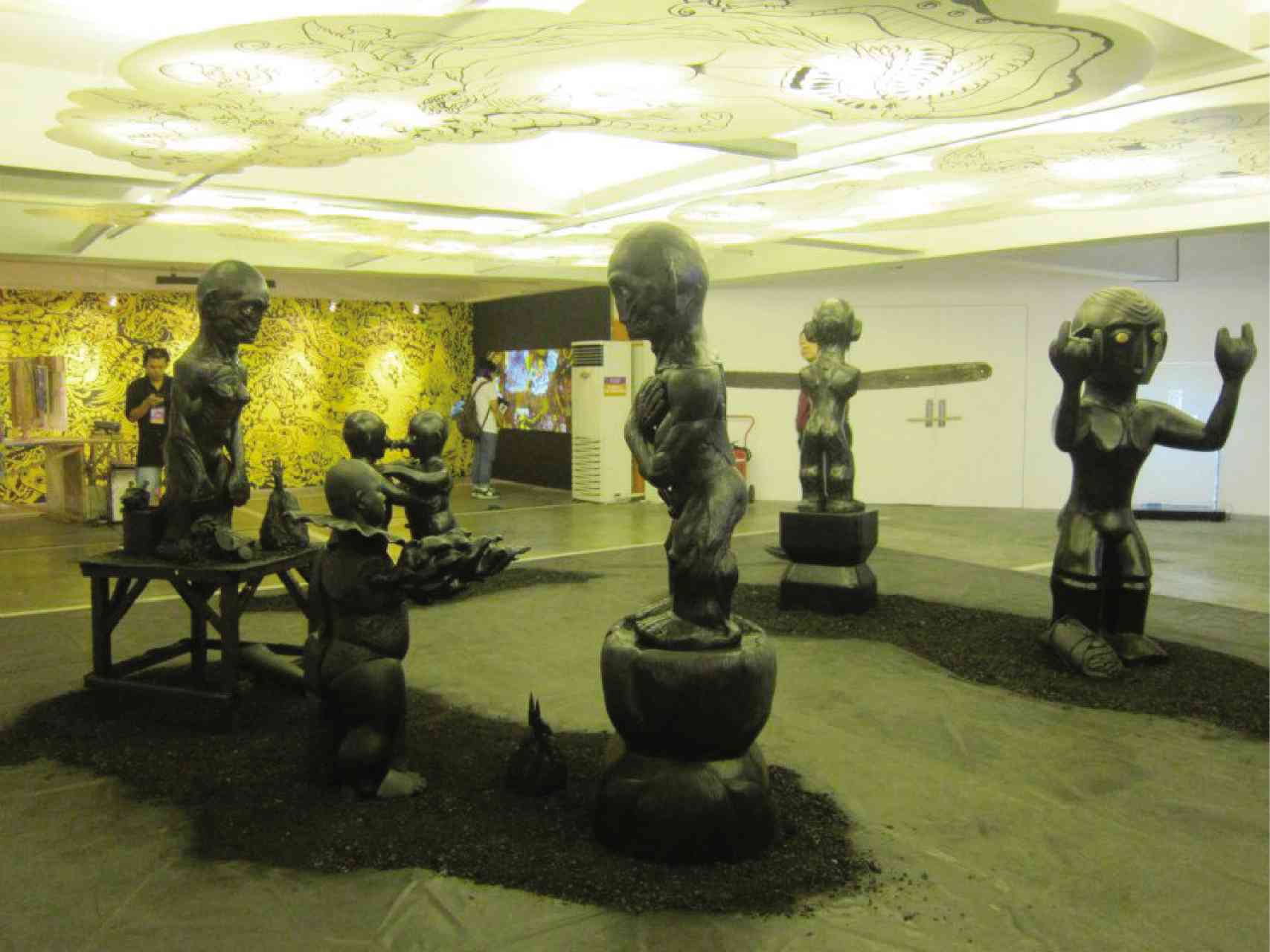 Contemporary artists aim for the ethereal and the enlightening

The recently concluded Art Fair Philippines brought together all kinds of people who shared an interest in contemporary art. Hipsters in their plaid shirts and porkpie hats mingled with young couples eager to buy their first piece of art, while college students wearing backpacks rubbed elbows with serious art collectors.

There were several young artists whose works stood out even among their more established counterparts. Eugenia Alcaide’s gossamer-like portraits at the Art Informal space were like holograms that changed depending on where the viewer was standing. Considering that they were only made of dark thread on mounted silkscreen was testament to her light touch and creativity.

Her classmate at university, artist Alab Pagarigan of Altro Mondo, also has a unique way of creating sculptures. Instead of dealing with heavier materials like wood, stone or marble, the slight 27-year-old told Inquirer Lifestyle that he preferred using wire—copper wire, in particular—to create his life-size pieces that attempted to capture a feeling or emotion.

Another artist at Altro Mondo whose two works caught the attention of visitors was Anton del Castillo. The first consisted of 27 light boxes featuring the contents of a person’s wardrobe while the second was of three quilted, Chanel-like bags that had actually been made of welded metal plate and rods.

Pagarigan studied at the Philippine High School for the Arts in Makiling before taking up Visual Arts at UP Diliman. He tried painting and creating bas-reliefs until he realized he liked being able to touch his creations, to “feel” how they developed rather than work on a flat surface.

He experimented by coming up with life-size wire sculptures of dolphins and, for his pre-thesis at UP, covering a number of bottles in wire.

“Basically, I wrapped things with wire. Once the figure was covered, I unloosened some of the wires so I could remove the mold. In a way, what I did was similar to papier-mâché,” Pagarigan said.

“The bottles looked interesting but in the end, they were just bottles,” he added.

He was then challenged by his advisers to come up with something more complex, so he decided to work on the human form.

Pagarigan said that for the two pieces that were eventually sold at the Art Fair, he worked with a mannequin and also cast people, especially for the parts that had to convey tension or movement. Instead of coming up with a complete human figure, he leaves some portions unfinished.

“My intention is to create that ethereal quality. I like being able to create virtual volume in my work,” he said.

Asked what he had planned in the next few months, Pagarigan said he and his older brother were preparing for an exhibit in May at Picasso Hotel in Makati. Both of them will be showing new sculptures.

“I’m still going to work with wires. Hindi ko iiwanan ’yan (I will not leave that medium) but I want to make the shadows that they cast an integral part,” he said.

While this might be akin to putting him in a box, artist Del Castillo is known for working within the comfort of a box frame. His earlier pieces include innocuous-looking toys set in light boxes and Byzantine iconography. Instead of haloed saints and martyrs, however, found objects like a unicycle or a toy cannon are placed in these mini wooden frames.

For the Art Fair, the artist went with a fashion angle because he had been “bombarded with various window displays and objects of luxury during my travels. At the same time, fakes were simultaneously shown in each city that I visited. I wanted to use objects of fashion as a commentary on the materialism of our society.”

The light boxes that covered one wall of the gallery’s space again were designed to look like regular closets containing clothes, shoes and accessories. The artist, however, said that there were two distinct parts of the closet, one masculine and the other feminine, “which shows how most view men and women, and how easy it is to stereotype and identify others without prior knowledge of their being. In the end, they are all just items meant for humans.”

This year is shaping up to be a busy one for Del Castillo with an ongoing group show at Now Gallery, and gallery exhibits scheduled in April and May at Canvas Gallery and UP Vargas Museum, respectively. “I plan to continue exploring new things in art and at the same time continue creating works that would enlighten society. It is an idealistic vision but it is what artists should do,” he said.