Children instrumental ensembles and the Madz perform prelude to their New York show in May | Lifestyle.INQ ❮ ❯ 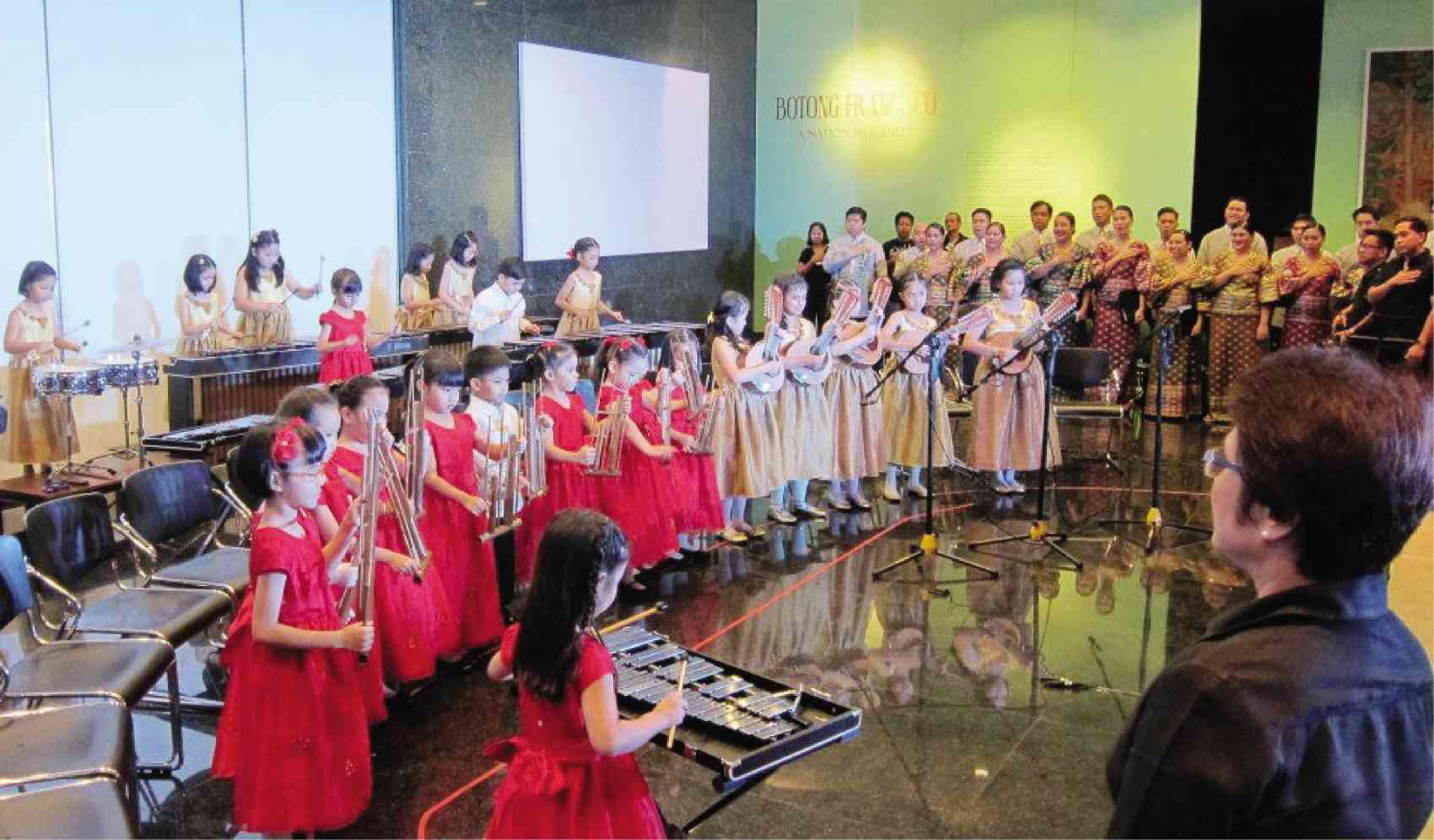 THE KIDDIE ensembles and the Madrigal Singers

Children instrumentalists from two schools, the Philippine Montessori Center (PMC) and Temple Hill International Ensemble (THIE), together with the Philippine Madrigal Singers, will have a collaborative performance at the Merkin Concert Hall, Kaufman Center in New York City, on May 28.

A matinee and a gala performance are scheduled on the same day under the banner “Pinoys to the World: A Celebration of the Filipino Musical Artistry,” before an international audience.

Their performance is made possible through the invitation of Amper Concert and Recording Productions Inc., which is dubbed  the Musical Voice of Filipinos in America.

The organization’s main thrust is to present talented Filipino artists to international audiences through recordings and performances.

A sampling of the slated performance was recently held at the lobby of the Ayala Museum in Makati City. The concert served as a prelude, a soft launch to a bigger farewell performance set for April 28 at the Meralco Theater.

The soft launch was held to drum up financial support earmarked for the groups New York trip.

The kiddie instrumental ensembles and the  Madrigal Singers electrified the audience. Their performance was simply stunning.

It has been three years since the children ensembles had performed on the local stage. Seeing the ensembles entirely made up of new members was refreshingly engaging. They showed admirable zest, sensitive musicality and dashing presence!

School director Iluminada Woellhaf said at the cocktails that it usually took some three years to hone the skills of the children, who are selected on the basis of potential and interest in music before a concert was staged.

At the Philippine Montessori Center, preschool children aged 4-6 years are already exposed to music and   trained. When the children move on to  elementary level at the Temple Hill International School, an affiliate of PMC, with age  ranging  7-10 years, music education continues and is integrated into the standard curriculum to provide the children a holistic development.

For the concert, the children rehearsed almost daily after classes, said TJ Manotoc, who hosted the program and whose daughter plays with Temple Hill School Musical Ensemble (Thisme).

The Madz opened the concert with arrangements of familiar tunes, a potpourri of familiar pieces from operatic arias to Cole Porter.

The mood for light listening was at once set, what with the usual antics the Madz are wont to do: dish out, for instance, Rossini’s familiar “William Tell Overture” in  syllables children are adept to do; rhapsodize with a familiar aria, “La Donna e Mobile,” with soloist tenor Ervin Lumauag; weave a cacophony of forest sounds in “Circle of Life” from “The Lion King”; croon  Cole Porter’s “Night and Day,” or spin a boogie-woogie beat with “In the Mood,” all to the delight of the audience.

In the second set, they awed the audience with more songs, notably, “Shine,” and their “a la bodabil” singing in “Da Cocunut Nut.”

The PMCIE, composed of a dozen toddlers, played on the marimba, anklung, metallophone, timpani and snare drum. Easily, they tackled Dimitri Kabalevsky’s “Comedian’s Gallop,” quickly dishing out tunes with startling precision. Interestingly, two girls played on the timpani and the snare drum, traditionally played by the opposite sex.

When “O Ilaw” was played, the ambiance easily changed from mundane to celestial. Truly through intuition, the children seemed to have a better understanding of what is divine, so pure and innocent!

Thisme has   included the mandolin (banduria), an instrument from the lute family, thus lending the ensemble a new look and sound. Rightly so, because the ensemble had to tackle a Vivaldi piece: Allegro, Concerto for Two Mandolins, which was played with aplomb, complete with arresting dynamics.

In Khachaturian’s “Saber Dance,” the ensemble brought the house down. Thunderous applause greeted their playing at the end.

At the marimba, Jose Benjamin B. Angeles Jr. son of Nancy Binay and Jose Benjamin Sr. and a pupil of Magdalena Fernandez, collaborated with Jonathan Coo on the piano, and impressed the audience with his  playing of two contrasting musical styles from the Baroque and Romantic periods.

He showed adeptness in the first movement of Vivaldi’s Concerto in D Major, as he struck quick-paced tones up and down the scale of the marimba. Then he had a tour de force in Chopin’s “Grande Valse Brillante,” etching well-phrased lines and clear tones with such a professional touch.

A big ensemble  filled up the stage when the three groups made a composite group with Mark Carpio on the podium;  teacher Lois M. Espinosa cueing the children as teacher Cathy S. Zulueta sat at the piano; and other teachers Jay Ian de la Cruz, Garche Tura Crodua and Cecile P. Salcedo stayed on the wings to guide the children.

The composite group cut an impressive presence, and tugged at audience’s hearts as it played a medley of familiar Philippine love songs. The arrangement was well done and thought of, bringing together such popular love songs as “Usahay,” “Minamahal Kita,” “Sarung Banggi,” “Maalaala Mo Kaya,” and “Katakataka” with a singular sweep.

Woellhaf  said backstage that the success of the production was anchored on the magnificent collaboration: the trio of  child, teacher and parent.