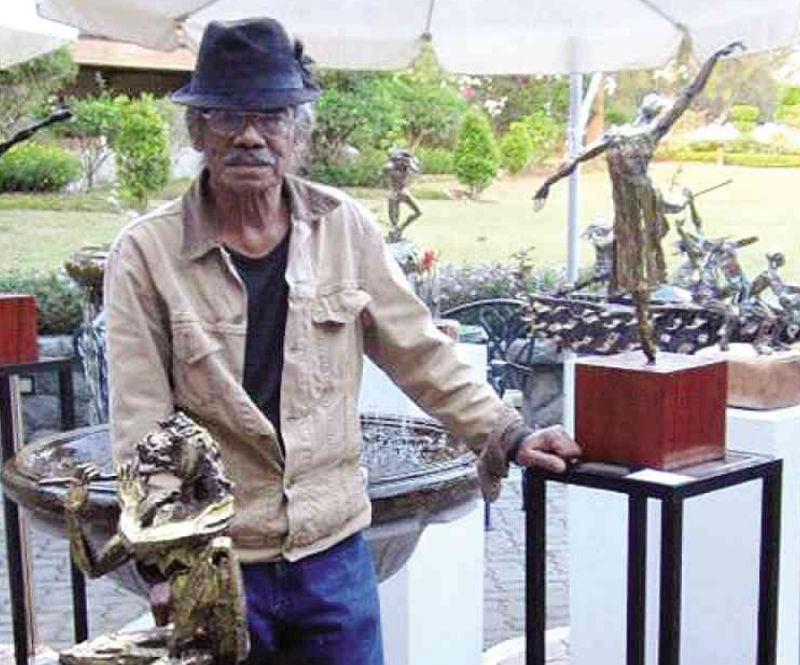 Ben-Hur Villanueva: Sculptor with a heart

And so there he was, the sculptor Ben-Hur G. Villanueva, articulate, humorous, a real raconteur, holding forth before visiting national media on the grounds of The Manor, Camp John Hay, leading tourist destination in Baguio City.

As he talked, he invited the visitors to watch his protégés, Kankana-ey wood carvers at work on their craft.

“They’re better than me, I’m amazed,” he quipped.

Nearby, in the outdoor café of the hotel, the figurative wrought-iron works of Villanueva and his son Bumbo were on display for sale, carrying such titles as “Jazz for You” (a saxophonist), “Flutist,” “Ballerina” and “Finale.” The prices were not cheap (six digits), and the exhibit was expected to run until the end of March.

Villanueva (brother of the late installation artist Roberto Villanueva) has a soft spot for the underprivileged. He has worked with streetchildren, and with “visually impaired” or blind children: “How do I teach them? I get down to their level and close my eyes.”

As for the Kankana-ey and other Cordillera indigenous wood carvers, he reeducates them on how to focus and then introduces design.

“My dream is for wood carving to be successful,” he said. “Then I introduce livelihood activities for their wives, to keep them busy, art weaving, batik- and sandal-making.”

The artist added: “I give workshops to their children. That’s what I did when I was in Silay City (Negros Occidental). I gave workshops for the children of potters.”

Villanueva won a Gold Medal in Sculpture from the Art Association of the Philippines (AAP) in 1984, with his work in black, wrought-iron metal titled “Protection.” It showed two children running in the rain and protecting themselves with a banana leaf (dahon ng saging).

An art collector bought it and he doesn’t know where the work is now.

Other major works were “Edsa ’86,” showing a family dominated by a cross and unveiled by President Corazon C. Aquino herself; “Kapit-Bisig” or People Power float in wood; and “Supremo.”

The latter was done when Villanueva, originally from San Mateo, Rizal (“at that time it was only 25 minutes from Manila”), moved to Baguio during the late 1990s. It was the winning entry in a bronze-and-brass competition because of its originality.

Instead of Bonifacio waving the usual bladed weapon or bolo (which is inaccurate, as historians have pointed out, because Bonifacio carried a pistol,) the hero was shown clutching a crumpled cedula (residence certificate). The work was turned over to the Bonifacio Foundation.

“I am blessed with eight children, four boys and four girls (by his wife Dolores),” Villanueva declared. “So, as an artist, how have I been able to feed my children?”

He is thankful to art educator Araceli Dans for giving him a fixed income, as an art instructor first at Philippine Womens’ University and then at the Ateneo de Manila, for many years.

He retired in 1992 and has been a full-time artist ever since, juggling the production of sculptural works with related extracurricular activities.

Villanueva has held many one-man shows, and participated in group exhibits. His works have been displayed in Las Vegas, Armenia, Singapore and Havana, Cuba (Segundo Biennale).

“If you claim to be creative, you must be resourceful,” he exhorted. “Wherever I go, I maximize (my time). I hate people complaining and complaining, because there is always a solution.”