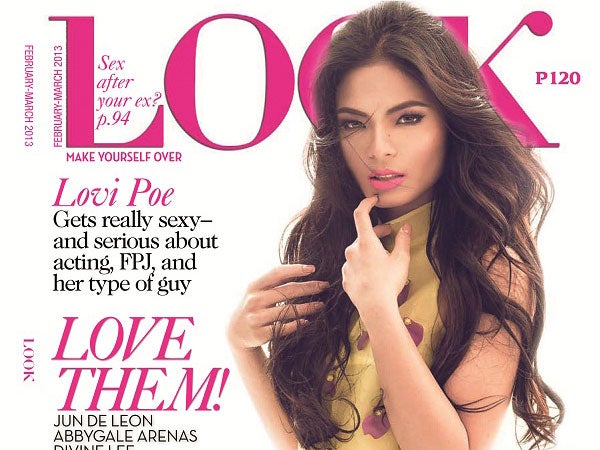 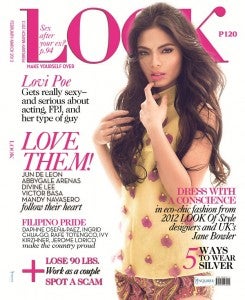 She gives us a buss on the cheek before we’re even introduced, and murmurs her apologies for being late.

We barely recognize her, this woman, practically a child, who enters the photographer’s studio, her long, dark, wavy hair still damp framing her makeup-free face. Neither would you, if you’re among us who know Lovi Poe mostly as that sultry underwear model on the Bench billboards.

Poe saunters in like a schoolgirl, shod in flip-flops, and dressed in a loose, gray tee over a short, flouncy skirt, a bold red Michael Kors Hamilton tote slung across her petite frame. She could still easily pass for 15, the age she entered showbiz. Poe turns 24 this February.

She had just come from a swim, says the actress, her workout routine whenever she’s scheduled for a photo shoot.

“Today I swam 10 laps,” she says later, propped on the makeup chair, sipping on a glass of red wine. The wine is also routine, her one single request to the LOOK team. “I actually like beer, but wine makes you like this,” she says, puckering her lips to emphasize her cheekbones.

“Now my secret’s out!” she adds with a squeal.

Not that the dusky beauty needs a boost from any such tricks. Though she bears little resemblance to her mestizamother, based on the one single photo of them together posted on the

Internet, her likeness to her famous late father is undeniable.

“I look like my dad,” she agrees. “But I don’t know where I got my morena complexion. Maybe it’s from swimming. Since I was a kid, I’ve always loved swimming.” Alternately, she also runs to keep fit, but she eats “anything.”

Poe has a passing semblance to another actress, KC Concepcion—“it’s the eyes,” offers one LOOK editor—and a lithe physique that feeds the fantasies of men and is the envy of many women. Her exotic good looks are a standout in an industry head-over-heels enamored with fair-skinned mestizas.

“A lot of people are telling me to get my boobs done,” she says. “I haven’t done anything. I tweeted kanina, it’s called satisfaction. I just love myself. It’s pretty tempting to be able to get things done for free. But no, eh. As long as I’m doing my job well.”

In seven short years, Poe has transitioned from budding singer to critically acclaimed actress. In 2010, she bagged two best actress trophies, from Cinemalaya and Famas, plus two more acting plums in 2012.

In the last Metro Manila Film Festival, she was in two of the entries, including Thy Womb, where she starred next to superstar Nora Aunor. (“She compliments you after a scene. Coming from Nora Aunor, I died!” Poe gushes.)

This February, she will appear in The Bride and The Lover, a Joel Lamangan film about marital infidelity, lately so popular a theme in local movies—and a subject that’s close to home.

“I have fond memories of my dad, but I rarely talk about them because I don’t want to be talking too much about my father,” she says.

Lovi Poe was born Lourdes Virginia Moran Poe on Feb. 11, 1989, a product of the late action king Fernando Poe Jr.’s affair with Rowena Moran, a former commercial model and actress. “I knew where I came from,” says the actress. “Everybody knew who my dad was, in grade school and high school.”

While she grew up knowing and spending time with her father, the general public wouldn’t meet the young Poe until after FPJ died, when she launched her singing career in 2005. She was one of two children the man everyone called “Da King” admitted to siring out of wedlock, when he ran for president in 2004.

“I think when I first got a tattoo, that’s when it all started, when I began to embrace everything,” she says of her transition into sexier roles.

“I was 20. It was on the death anniversary of my father. I started with this sweet image. But I felt like I was locked inside a box. A part of me is still like that, but I felt limited.”

Poe has three tattoos, markings now familiar to anyone who has seen her half-naked onscreen, and on billboards and magazines; all are a tribute to her father.

“First I was hiding them. ‘This is not what FPJ’s daughter should be,’ that’s what I was thinking the whole time,” Poe says.

Then she adds with a laugh, “But I got my tattoos at my brother’s place, so it’s okay.” The brother she refers to is Ronian Poe, a club DJ and tattoo shop owner, FPJ’s son with former actress Anna Marin.

The tattoos were sort of a rite of passage for the young actress, who before that was constantly worried of what people would think of her actions. She didn’t want to smear FPJ’s good name.

But “I realized I’m not my father,” she says now. “We’re different from each other. When I started accepting that, I felt more free.”

On her choice to shed her innocent image and embrace mature, sexier roles, Poe says, “This image thing, it’s just something that I play with. It’s not something that I’m doing every day. I keep pushing myself. It’s something I really enjoy doing, as long as it’s done tastefully.”

FPJ never brought his daughter to movie sets. “My mom didn’t want that,” she says. But her dad knew of Poe’s desire to become a singer. “He wasn’t fond of the idea,” she recalls. “He didn’t say no, but then he said there’d be a right time. He was protective of me. But I knew that at some point he’d allow me.”

Entering showbiz, her provenance was both a blessing and a curse for the young Poe. “I don’t know why,” she says wryly. “I had a lot of detractors. And I was at an age when even the simplest things were hurtful. I realized those things made me stronger.

“The positive thing about having my father’s name is that, my dad left this legacy, he was a wonderful person, not because he was Da King, but because people loved him for who he was. Yung mga taong nakakatrabaho ko ngayon also worked with him. I feel the love extended to me.”

Of gossip and intrigues, she says, “I don’t fight back. I don’t make patol. I find it a waste of time. People always want to hear the juicy things, anyway. Why explain yourself when people won’t believe you? I’m here in this business, and hopefully people will appreciate me for my craft. Mga intriga, they will pass. I have amazing people around me, a great support system.”

Her discomfort is palpable when the subject of FPJ’s wife, Susan Roces, arises. But the young woman doesn’t dodge the bullet. “Once in a while I get to see them,” she says, referring to the veteran actress and her daughter, Grace Poe-Llamanzares, both of whom she met when FPJ died. “They’re very nice people, I get to greet them. It’s something I’m very thankful for. Both of them have always been nice to me.” 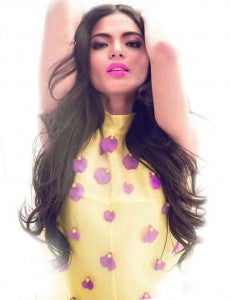 Poe, however, never dreamed of Roces’ acceptance. “It’s something I never thought about. I was very secure in the love of my mother, my family, and my friends. I didn’t look for other things or dwell on depressing things.”

In an interview with the Philippine Daily Inquirer in early 2012, Roces acknowledged the propriety of her husband’s children. “I respect these children,” she said in the article.  “I do not want to discuss them and they know that, so they do the same for me. They try not to use me or their relation to my husband, although they cannot really deny it.”

Rowena Moran never married, though she has a younger daughter. “My mom is very private,” says Poe. “She doesn’t go with me to tapings. She trusts me a lot. She doesn’t watch over me anymore, she’s letting me be. When it comes to work, it’s just my manager, Leo Dominguez.”

Moran didn’t want her daughter to enter showbiz. But the mom would later relent to her firstborn’s relentless prodding. “She knows that the more she stops me, the more I’ll do it,” says Poe.

Neither does the mother meddle in Poe’s relationships. “We had a gap for a while because before, she would disapprove.” This was way before the Ronald Singson episode, Poe clarifies.

Poe famously dated the former congressman, nearly 21 years her senior, in 2010. The relationship unraveled after Singson was charged with drug possession and was sentenced to 18 months in a Hong Kong prison.

“Ron was a fun guy. I learned a lot from him,” says Poe of her ex-boyfriend. “What happened to him, it was tragic. It was a tough moment. I think we were good, but people around us… Sometimes you have to let go of things that you love for you to have peace of mind. It wasn’t him; it was the people around us that made it difficult. At that point, okay, guys, you win, kayo na ang bahala.”

She’s dating again, Poe says, but it will take time before she can commit to another relationship. “The most important is that they should be funny, that’s no. 1,” she says of prospective dates. “Di ako mahilig sa guapo.” Neither is age an issue.

“Ron was wonderful. I didn’t feel the age difference at all. It’s not about dating an older man, but dating the right guy. You can date someone a lot older than you, but who will not take care of you.”

Poe may have some of the affectations typically associated with showbiz denizens (read: casual cheek busses with strangers), but she can also be as un-showbiz as they come.

She’s not cagey, even as we sense her unease with our queries. She’s also smart and articulate. If you can believe it, she takes great joy in simple things: When she’s not out with friends, she’s home watching the hit 1990s sitcom Friends, describing the DVD set as “the best gift I have ever received.”

And while Poe arrives late for this shoot, she doesn’t come rolling in with a meddling and difficult entourage, but with a lone personal assistant.

“I let my manager choose my projects,” she says. “I have this thing about not reading the script so it comes out more natural. When I over-analyze the character, it doesn’t come out right… I just want to keep doing good projects, and get better every time, and work with good people and amazing actors.”

She may be making a name for herself now, but Poe knows she can never dissociate herself from the luster of her legendary dad.

“I’m fine with it,” says Poe. “It’s not an issue for me. It’s something I’m actually proud of. He was an amazing father.”