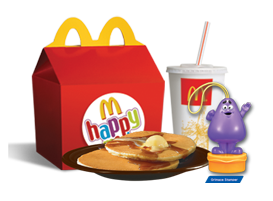 Studies show that children who eat breakfast regularly have an intellectual and verbal advantage over those who do not, according to Adi Timbol, public relations and communications manager of McDonald’s Philippines, which gave away thousands of free McMuffins on Monday, March 18, 2013, in celebration of National Breakfast Day. PHOTO FROM MCDONALDS.COM.PH

MANILA, Philippines—You’ve heard nutritional experts say breakfast is the most important meal of the day.

Either way, studies show that children who eat breakfast regularly have an intellectual and verbal advantage over those who do not, while adults who don’t skip the first meal of the day are less likely to develop diabetes.

Adi Timbol, public relations and communications manager of McDonald’s Philippines, quoted these findings from a study released by the University of Pennsylvania School of Nursing in February, noting that children who eat breakfast regularly get higher scores in intelligence quotient tests.

“Eating breakfast is really important,” Timbol told the Inquirer shortly after the close of the fast-food chain’s celebration of National Breakfast Day on Monday.

The study, whose lead author Dr. Jianghong Liu is an associate professor at the university, found that children who skipped breakfast frequently got IQ scores 4.6 points lower on the average than those who did not skip breakfast.

It also found that those who skipped the meal fared “significantly lower” on verbal performance.

The study employed 1,269 6-year-olds from China, where breakfast is given importance.

Timbol also quoted a study from the University of Minnesota School of Public Health published last year, which found that adults are less likely to develop Type 2 diabetes if they eat breakfast regularly.

Neither of the respondents had Type 2 diabetes when they entered the study.

“That’s how important breakfast is. It doesn’t matter how busy we can be,” Timbol said.

According to Timbol, Monday’s celebration of National Breakfast Day was a way of reminding some people who say they are “too busy to eat breakfast” to “get back to the habit.”

The good news, she said, is that majority of Filipinos still recognize the value of the first meal of the day, considering the increasing number of establishments offering breakfast meals.

“We see it in the neighborhood, coffee shops, convenience stores offering breakfast meals. You can deduce that there’s strong demand for breakfast,” she said.

In commemoration of “the biggest breakfast celebration in the region,” around 5,000 McDonald’s fast-food chains in around 30 countries in the Middle East, South Africa and the Asia-Pacific gave away close to 5 million McMuffins to their patrons.

Timbol said National Breakfast Day would be an annual event.