Some things are just beyond my control, says Tejada’s adviser in open letter | Inquirer Lifestyle 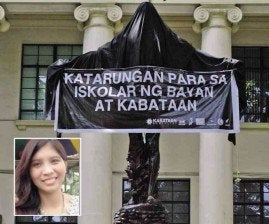 Some things are just beyond my control, says Tejada’s adviser in open letter

MANILA, Philippines – There were many things she could have done as Kristel Tejada’s adviser but for Professor Andrea Martinez of the University of the Philippines Manila, some things were just beyond her control.

In an open letter to critics who have accused her of neglecting the freshman student’s financial problems and called her “pabayang (neglectful) teacher,” Martinez admitted that she was guilty of being unable to “act on Kristel’s dilemma.”

Saying that she was opposed to the university’s “repressive policies… from the very start” she pointed out that the letter was written not in an effort to clear her name but to “vindicate” Tejada.

Martinez said that Tejada, who took her life due to financial constraints which prevented her from continuing her studies, had been “a victim of a system that deprived her of her constitutional right to education.”

“All of us are guilty of her death by way of commission and by our deafening silence to the plight of impoverished sectors in our society… If the public is in pain because of her death, please give me and her family the benefit of the doubt that we are more in pain than you,” said Martinez.

With Martinez’s permission, INQUIRER.net is reposting her letter in full she wrote in her Facebook note.

“This is in response to critics, who fondly call me the ‘pabayang teacher’ of Kristel. I admit my guilt. But I will not apologize to anyone else except to Kristel and her family. I do not owe an explanation to anyone, I do not need to clear my name, but I owe it to my Department in the University to clarify some issues, and I owe it to Kristel’s memory to vindicate her name.

“I have not exonerated myself of any guilt, from the very start I admitted I had my fault. Yes, my ‘inability’ to act on Kristel’s dilemma of LOA may be one of the ‘multifactorial’ issues that contributed to her untimely demise, and I ask Kristel to forgive me for that. I will not absolve myself. I could not even forgive myself. But there are the ‘facts’ that are beyond my control:

“(1)   No, Kristel does not need a guarantor when applying for a loan in the University. UP has ‘simplified’ the process of loan application. Instead of having faculty/staff guarantors, the process just requires a signature and letter from parents. So as much as I want to be Kristel’s loan guarantor, she has no need for it;

“(2)   Yes, I could’ve loaned Kristel the amount that she needed. My colleagues in the Department were supportive of them—they were ready to help and pitch in the money needed—if we had known before deadline. But Kristel’s family has so much self-respect and dignity they would not want to ask for loan (except in the loan assistance provided by the University), so they instead pawned their property.

“When we learned that they have not settled their account, we told her Dad to talk to the Vice Chancellor for Academic Affairs and ask her to allow Kristel to enroll, and the Department will shoulder the cost. But the request fell on deaf ears. All of us have been made victims of the technicality of deadline. I am just a junior faculty, I do not have the clout and the power to influence the decisions of the powers-that-be. The Department has also been constrained by the mechanical application of repressive policies. We have opposed these policies from the very start, voiced out our strong opinion on this, that even in the Faculty Council meeting of the College held last November 2012, we assailed the policy as anti-student.

“(3)   Yes, I was one of Kristel’s confidante, even her Psychology professor, and it was a total blunder that I failed her (this, I admitted from the start). I may have been inept in helping her with her LOA problem, because the least that I did was listen to her woes, show compassion, to sympathize and cry with her. Yes, they are not enough. I do not intend to brag of the things I did for her (the media and the public do not know the extent of my involvement). I guess I was remiss on the idea that Kristel was concerned with the ‘present predicament,’ (i.e., the LOA) because I instead tried to help her to look forward, hope for the best and see the brighter side of life, inspiring her of stories of my former students who despite hardships have succeeded.

“Our approach to her problem was more of solution-focused, so Kristel and I searched for ways to prevent the LOA from happening again, looking for scholarships, placing mechanisms of addressing her financial worries, helping her look for a part-time job. People wonder what I tell her in the text messages we exchanged with each other? I’m sorry but I’m bound by my respect for confidentiality of our communications. But definitely, like any of her friends, I told her to stay strong. And yet, I failed her big time because I was not able to help her, but Kristel was still very appreciative with the many “thank you” notes and messages she sent to me. So, as I said, I do not owe my apology to anyone of you, except to Kristel.

“(4) No, I have not seen it coming. Were there signs that Kristel will end her life? While I was busy listening to her, I was blinded by the idea that Kristel was trying to stay positive despite setbacks. Before that fateful day of March 15, we have already scheduled our next lunch together to talk once again, so I did not have an inkling that she will make a drastic action. Unlike Physics which can predict the exactness of natural phenomena, Psychology can only predict the “likelihood” of human behavior. While Kristel was devastated over her LOA and financial problems, I could not say with complete estimation that she will act on her depression by taking her life.

“(5) Yes, I did advise Kristel to seek counseling. I told her I may not properly handle the counseling session with her because I was so involved in her issue I might be subjective and biased. But she said, she’s okay as long as she can talk to me and to her friends. Kristel is the kind of person who would assure you ‘she’s doing fine,’ that ‘kakayanin nya.’

“(6) Yes, Kristel is a Behavioral Sciences student. But she was just a freshman. She was only starting to take her major courses this second semester if only her enrollment has not been derailed. If her critics are thinking that any BehSci student/practitioners could easily navigate life because they are knowledgeable of handling personal issues, they are wrong. Like anybody else, we have our own tolerance level to stress. So, let’s not have a condenscending attitude towards what happened and condemn her for giving up. Let’s not assume the moral ascendancy that we are sooo good about navigating life’s difficult waters while she was not… Her memory deserves more than that.

“(7)  Yes, UP professors are among the best, I salute my colleagues on that. But if you are not my student, you don’t have any right to accuse me of mediocrity and ‘kapabayaan’. I reserve the right to judge me to my students and my students alone. People who do not know me do not have the right to assassinate my character. You may assume a “moral high ground” with your accusations, but look yourselves first in the mirror before you say anything against me. I am proud to teach in UP, I will forever be proud to be its alumna.
“Kristel is a victim of a system that deprived her of her constitutional right to education, of her right to dream and achieve her dreams. All of us are guilty of her death by way of commission and by our deafening silence to the plight of impoverished sectors in our society.

“Let us not exonerate ourselves of our guilt. If the public is in pain because of her death, please give me and her family the benefit of the doubt that we are more in pain than you. Because even if I was just a fragment in the short life that Kristel had, I am fortunate to have laughed with her, cried with her, exchanged stories with her, and dreamt with her. We owe her that respect. So if you cannot offer any consolation to her and her family, I plead for sobriety. ‘He, who has not sinned, cast the first stone.’”