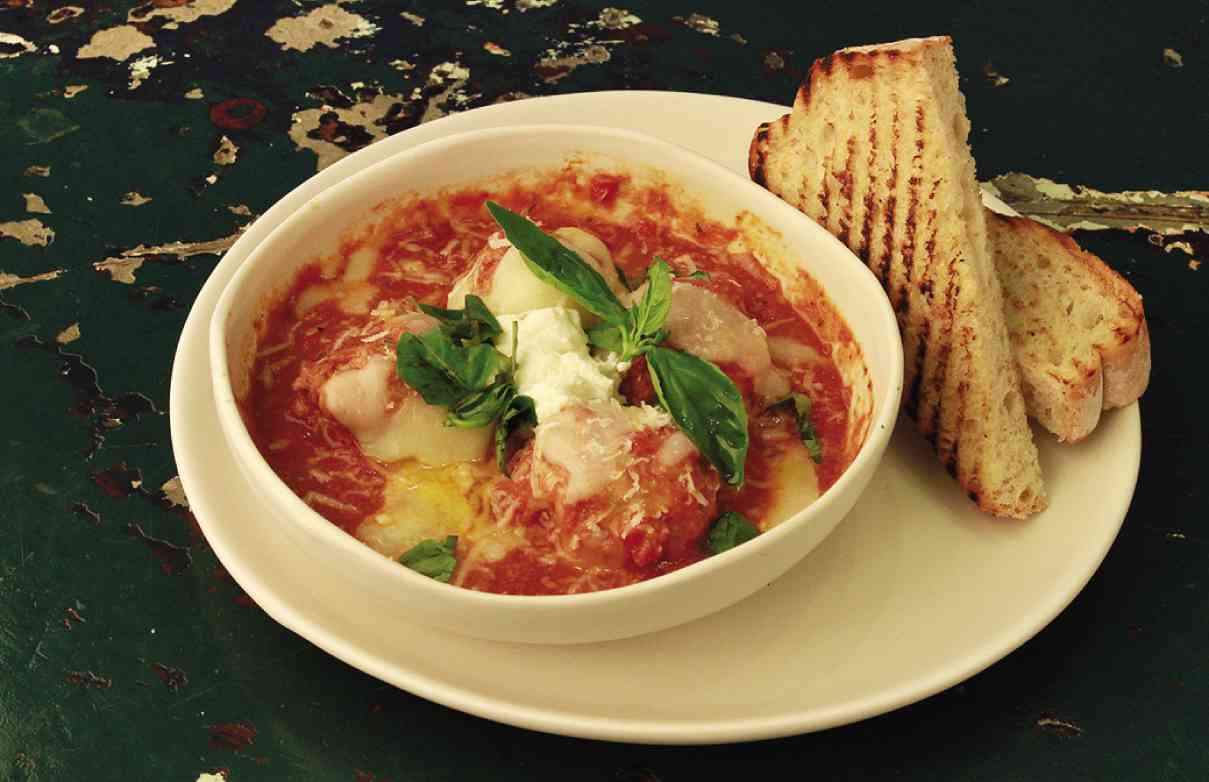 Grace Park at One Rockwell is the much-anticipated restaurant in the portfolio of lifestyle maven Margarita Forés. The concept is a tribute to the Sunday reunions in the Caloocan home of her paternal grandmother, Angie Geronimo Forés.

The Geronimo compound was in the tony (at that time) neighborhood of Grace Park. The clan’s joie de vivre was expressed in resplendent dishes that had been cooked for hours, and the dancing of the cha-cha and mambo that followed. The company that shared the meals and the intimacy of the dining room also lent an inviting and comforting quality to mealtimes.

Forés’ Grace Park recreates the informality, the coziness and the interesting compositions of texture and colors that were intrinsic in the family’s food and entertaining style.

“The food suggests farmhouse cooking, like those little holes-in-the-wall from our travels,” says Forés. She refers to the welcoming rustic restaurants in New York such as Roberto, dubbed the “macaroni mecca” in the Bronx, and Il Buco, famous for its home-cured meats.

“My encounters with Michelin-star restaurants can inspire the catering business. But it’s the experience in these uncontrived places and the genuine food that we really love.”

The cooking is based on fundamental precepts espoused by Pelligrino Artusi, the author of Italy’s culinary bible. He maintained that the dishes should use only the finest ingredients that are in season. The preparation demands proper technique, and passion brings success.

Thus, at Grace Park, there are no shortcuts. The pastas are lovingly made by hand. The breads are either home-baked or supplied by artisan bakers.

Forés and her partner, businessman Alfonso “Alvin” Lim, believe that when the cook is enthusiastic while preparing the food, the positive energy is transferred to the food, and thus nourishes the person who partakes it.

“Grace Park is a back-to-basics concept. Aside from picking things from seed to plate and from earth to fork, it celebrates the organic produce of our farmers and artisan producers here and abroad. It honors the old ways of doing things, like slow-food cooking techniques,” says Forés.

She works with her network of organic producers and uses the best imported ingredients supplied by Bacchus International, such as Acquarello Risotto, dubbed “the ultimate rice”;  Galloni ham, said to be Italy’s finest cured ham; and organic and biodynamic wines.

The menu is compact. “It should be like a farmhouse kitchen with not too many items. Everything is based on the produce delivered from the farms,” Forés says. Still, it’s a mix of home-grown comfort food, healthy alternatives and guilty pleasures.

Grace Park has its specialties such as fruit and vegetable juices with unique touches. Forés bravely mixes cucumber and strawberry and Chinese cabbage, apples and mint. The iced tea is concocted with lime, lemon and Indian Assam black tea, and the dalandan juice is sweetened with sunflower honey.

One can feel full with the hearty appetizers. Grace Park’s signature dips consist of sardines with homemade mayonnaise and asparagus with pecorino romano for tang. They are served with contrasting hearty rustic breads and fine crispy cracker breads, or carta di musica.

The bite-size chicharon is baked so it’s less sinful, but you still indulge with the chive mousse, salmon roe and prosciutto.

The Mushroom Field is a special of Japanese mushrooms—shimeji, enoki, oyster, chicken mushrooms and shiitake that are fried in light batter and dipped in bagna cauda, a creamy, garlicky dip originating from Piedmont, Italy.

The Three-Page Salad is a mountain of carta di musica, also called grilled Sardinian flatbread, with organic greens and kohlrabi from Malipayon farms, teamed with honey-mustard and Dijon dressing.

The core of the menu consists of handmade pastas and the meat dishes. An individualist, Forés adds her touch in the fettuccine bolognese by infusing spinach. The tortellini a la panna is made with organically grown pork, prosciutto or cured ham, enriched with homemade ricotta and parmesan.

Then there’s the ribbon pasta with puréed squash mixed in the dough and graced with lemon mascarpone, ashen goat cheese and organic pistachios. Orchiette (which means “small ears”) pasta is done with organic Swiss chard from Malipayon farms.

An inveterate cook, Lim created the Three-Cheese Meatballs. Although simple, it is heartily packed with provolone, ricotta and pecorino romano.

Still on comfort foods, Grace Park has its version of the hamburger, made with a quarter pound of beef patty, jack cheese, a slice of beef belly and bacon strips, thus the name OMG Burger.

The organic pork chop is soaked in brine for several days and served with squash. Resembling a young porterhouse, the Bone-In Tenderloin is drenched in a barolo reduction, which enhances its deep flavor.

The desserts are no less extravagant. Lim’s carrot cake is densely packed with carrots, grated fruit and nuts. It is treated to a thick blanket of cream cheese. His golden cassava cake is concentrated with a moist, custard layer and a silken topping made of artisanal cheese.

The Tres Leches is made with generous proportions of condensed milk, fresh milk and cream spread onto the spongy layers of the cake. The Eton Mess, meanwhile, is a traditional English dessert that’s a light muddle of whipped cream, meringue and fruit.

How Forés chooses the menu and the choice of mint pots as table décor are also reflected in the restaurant’s look. Designed by architect Jorge Yulo, the inspirations were the old buildings of New York  and rustic restaurants in Europe.

She waxes enthusiastic about finds from second-hand stores such as the copper molds, old farm tools and mezzaluna, a knife for chopping herbs, which have become decorative accents.

Between interviews, we catch Forés instructing her staff. She is very exacting in the preparation and presentation of food.  What impresses is that despite her stature, she is genuinely hospitable. Now we know why her business is synonymous with quality.

“Grace Park is a reflection of how to do things in our home kitchen, sharing love, grace and ourselves with every dish we prepare,” says Forés.

Always understated, she is in white T-shirt, a black pencil-cut skirt and mocha suede stilettoes; she looks younger after losing 15 lb in three months. Her endocrinologist prescribed natural supplements to correct her hormonal imbalance. She says the treatment gave her energy to put up Grace Park.

Ultimately, Forés attributes “Grace” to the Divine. “It’s doing things with God in mind, in the way that He wants us to live our lives. Like doing things to make our lives better for others.”