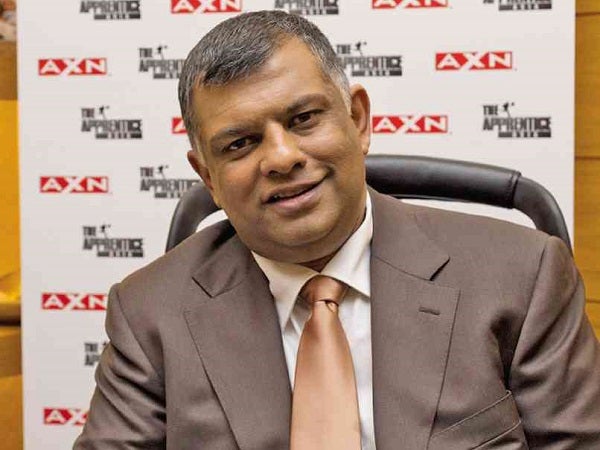 The longer you talk to AirAsia CEO Tony Fernandes, the stronger the urge to hand in your resume and beg to work for him.

His sharp mind, charisma and encouraging attitude towards his management team and staff make him the inevitable choice to assume Donald Trump’s big boss role in Asia’s version of “The Apprentice.”

But landing Fernandes wasn’t easy. “They (producers) had a tough time convincing me,” he recalls. “For two years I turned it down, I kept saying to look for other people in Asia.”

Eventually the producers decided to pit Tony Fernandes against himself in order to seal the deal. “They kept coming back to me and they threw in my motto, ‘Never take no for an answer.’”

Super talks to Fernandes, along with “The Apprentice Asia’s” coadvisors—Kathleen Tan, CEO of AirAsiaExpedia and Mark Lankester, CEO of the Tune Hotels Group—and asks them about hiring, firing and what they have in store for the contestants.

How were you convinced to become the boss for “The Apprentice Asia?”

Tony Fernandes (TF): I wasn’t sure I was the right person because I didn’t think I had the right personality to be the boss on this show. But they kept saying I was the right guy, they’ve been throughout Asia, couldn’t find anyone else, and in the end my commercial team kinda pushed me to do it and I’m glad I did. It’s been a good experience for me, and it’s another piece of my life which I never thought I would ever do—to be involved in a TV show.

A story in Forbes Asia describes the Asian version of the franchise to “reflect Asian sensibilities, with more tactful confrontations and a focus on inspiration.” Are you going to be a benevolent boss on the show?

TF: I didn’t think I was anything like Donald Trump, and I’ve never seen him on “The Apprentice,” though I’ve seen him outside of it. I think I’m a little bit more benevolent, but it’s amazing when you get into the boardroom… Maybe I’m not as benevolent as I thought I would be. Maybe the show’s producers make me a more evil person, but generally throughout the show I will always give pointers which I think would make them better people, and I try to encourage them as well.

Does having a business background a requirement to become a contestant?

TF: I don’t think so. I don’t look for stereotypes, I don’t look for someone who went to Oxford and Cambridge, or have fifteen A’s. I look for the individual. We’re all confronted with different facets of life. I was lucky I had a good education which gave me a jump-start in life, but in AirAsia we have boys and girls from the bottom—they may be just carrying bags for us, they may be check-in assistants, but they’ve grown into serious management level positions. They’ve gone to become pilots, they’ve gone to engineering, they’re running countries.

We look for talent everywhere and I’m glad the producers didn’t limit it to just a group of people. They looked for people whom they thought would add value to me as an apprentice, and that can come from any walks of life.

When people don’t perform well in your company, are they immediately fired?

TF: I am more benevolent in my company. I think the show has made me a bit harder, actually. In recent weeks I’ve fired a few people from AirAsia. I was having a discussion recently with my senior managers who wanted to remove a member of the staff, and I said, “I see some value in this person, I’d like to try and give him another chance.”

But it reaches a point where you can’t, and I think AirAsia has grown and sometimes the people haven’t grown with it, and it’s tough to make those calls sometimes. But I look at it from the whole organization and sometimes if you look at a football team, one player could let the other 10 down, so sometimes you have to make that call.

I generally would give people a second chance, I celebrate mistakes ’cause I’d rather people take a risk and try something and fail than not try at all. But I don’t celebrate the mistake twice.

What do you want viewers to learn from “The Apprentice Asia”?

TF: I hope to give some words of wisdom as to what it’s like being a CEO, what it’s like to grow in terms of an organization, to give the viewers a chance to dream and to believe that they can achieve anything that they want to achieve.

Also, I think I would like the kids to see Asia as one. That’s our future. If we can work closer together, then Asia becomes a much more integrated market—then we are less dependent on what happens in Europe or America.

Was owning an airline a dream of yours since you were young, or did you have other dreams?

TF: There were hundreds of dreams, but one of them was owning an airline. No one really believes me, but it’s true. I was 5 years old and I said to my father I wanted to own an airline. Of course he laughed. My whole life most people have laughed at what I’d said, but I always have managed to deliver majority of the time.

Lots of kids have been told not to follow their dreams, and to get “proper jobs” instead. What advice do you have for them?

TF: If you listen to any of my speeches, and I do hundreds of them, I always say don’t listen to your parents. It’s your life. I was supposed to be a doctor. My father was a doctor. From the moment I came out of my mother’s womb, I had a stethoscope around my neck. I just completely ignored them. I played on for a while and at a vital moment I said, “I ain’t gonna be a doctor.”

It created World War 17. I said, “It’s my life. You’ve got to let me lead my life.” Of course, parents give advice, you listen. Advice is great, but ultimately you’ve got to make your own decisions. That’s the kind of thing I’m looking forward to in my apprentice, someone who can stand on his/her feet, make decisions, and don’t have to refer back to their parents for everything.

Can you imagine if every person in Hong Kong became a doctor or a lawyer? Where would the Aaron Kwoks, Sammi Chengs, and Jackie Chans come from? We need a diverse group of people and I tell kids, “Follow your dreams. It’s amazing what you can do. You don’t wanna sit there at (age) 55 and say, “I wish I did it.” It’s too late, and your parents aren’t probably around anymore.” You should live your dreams, you should not worry about failure. If you fail, it’s OK, at least you tried.

What tips do the three of you have for young entrepreneurs looking to start a business?

TF: I’d say, one: Go with your heart. If you think there’s a business opportunity, don’t listen to advice, just do it. You gotta make sure that you have something that people want—if you’re gonna start a business, make sure there’s a demand, I don’t care what anyone says. It’s like the music business. First thing you gotta have is a good song.

Then once you have a good idea, you’ve got to be able to market that good idea—so many great ideas people never hear of.

And the third aspect is surround yourself with good people. No one person can do everything. At AirAsia I get 90 percent of the credit, which is grossly unfair. We are successful because we have 10,000 amazing people and I have an amazing senior management team that’s gone out and done remarkable things—there’s no way one person can do everything.

Surround yourself with good people, be a good team player, be a great leader. Sometimes as an entrepreneur, you can’t follow conventional wisdom, you’ve just gotta go out and do what you feel is right, otherwise you’re just following everyone else and you won’t be that standout person with that standout product.

Do you think women still have to exert extra effort in the workplace despite modern times?

Kathleen Tan: It’s not about gender when you’re working, it’s about how good you are in your job and delivering what responsibilities you have been given. Of course, women being women tend to be a bit more emotional and the key is to control the emotion and make more decisive decisions when you need to.

Who has been your personal mentor in business?

Mark Lenkester: I’m not just being politically correct, but clearly Tony was a very important factor in terms of us stepping out and choosing to go along with our own businesses, with his support of course.

If you Look at Tune Hotels specifically, that was very much Tony. It was Tony’s idea with some of the co-founders, and I was really executing the vision and the idea. On another side you’ve got to say that, for me at least, my mother was a very important stabilizing factor. She really taught me some of the great things: You’ve got to go where your heart is, be bold, be brave, don’t naturally sit still and walk softly, but carry a big stick.

“The Apprentice Asia” airs on AXN Asia in May.