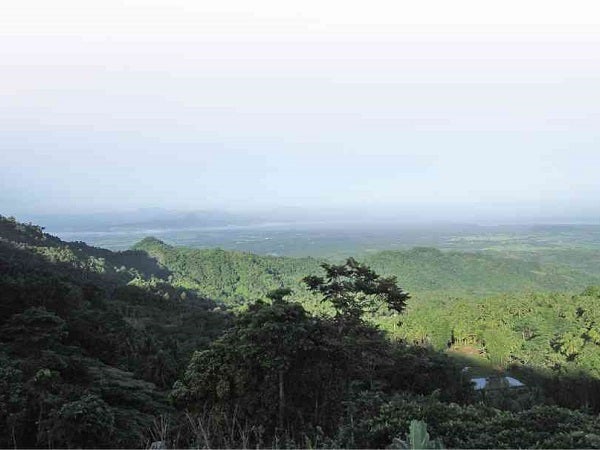 VIEW FROM ON HIGH. At the last Station of the Cross in Mt.Mahayahay, you are greeted by this breathtaking and expansive vista. PHOTO BY GIGI NAPANA AND RALPH FERNANDEZ

In Butuan City, it’s Holy Week in no man’s land

When Holy Week unfolds next week, all roads in Butuan City will lead to Mt. Mahayahay, where devotees troop to the Stations of the Cross in Barangay Anticala, 24 kilometers southeast of the city proper.

This can come as a surprise, because the place used to be known as no man’s land, a trouble spot where the players included illegal loggers, small-scale miners (with big-time connections), the military and the New People’s Army.

A security officer explains, “The mountain offers shortcuts to wherever you wish to go in the Caraga region, if you know the terrain, which for many people can be unknowable, if you know what I mean.”

And we’re not necessarily talking in the past tense here. Only a few weeks ago, the military and the communist insurgents had what the locals call “a party”—and village folk were evacuated to safety zones.

“But the situation is back to normal now,” attests Reynaldo Z. Bao, barangay captain of Anticala.

Besides, ever since the Stations of the Cross became a habit among today’s Butuanons these past few years, a “party” usually breaks out in the run-up to Holy Week—“It’s some kind of an anniversary thing,” another observer of the security situation lets on.  Then a season of peace and quiet sets in, allowing the Christian devotees to do their Holy Week trek up the mountain.

“We are reclaiming Mt. Mahayahay as a prayer mountain,” declares Mimi Salcedo-Aquino, organizer of the annual Stations of the Cross. Her husband, Rep. José “Joboy” Aquino of the First District of Butuan, initiated the Holy Week ritual here in 2009 as a personal crusade. He keeps it going with the support of the faithful, and considers it “a key spiritual anchor” in his call for the city’s renewal.

Last year’s turnout was “more than 5,000 people, from five-year-olds to 67-year-old retirees,” says Dino Claudio Sanchez, the city’s former vice mayor. It’s been a religious devotion and a summer outing, a wellness climb, an environmental advocacy, a miraculous healing session and, all in all, an unforgettable spiritual experience.

As early as 3:30 a.m. on Good Friday last year, a swarm of people had spilled into the side streets and even the highway outside St. Joseph’s Cathedral in downtown Butuan. The assigned vehicles were not enough, but not to worry: Strangers offered rides to strangers, and families shared their vehicles with other families. “It was an outpouring of Christian charity that moved me deeply,” Sanchez recalls.

From the highway to Surigao City, there is a crossing nine kilometers from the cathedral. The convoy turned right here, and in no time the city road gave way to rough mountain dirt road, rocky and slushy.

Ten kilometers from the highway, devotees left their vehicles and began the 5-km Stations of the Cross. The last station was just across Mahayahay Elementary School, which has a breathtaking view of the city below. (This year, the last station has been moved to the school.)

For the past three years, the Stations of the Cross have been led by Rev. Fr. Joesilo Amalla. A key member of the clergy in the Diocese of Butuan, Amalla is well-known in the academe for his scholarly work, which has ignited the clamor for the bold revisionist claim that the first Mass in the Philippines was held not in Limasawa but in Mazaua in Butuan.

“This panaad (Stations of the Cross devotion) ties up neatly with the spiritual heritage of Butuan,” he says. “The first Mass in the country was held here on Easter Sunday. What we are doing here for the panaad is praying for the resurrection of the moral, spiritual, social, economic, political and cultural life of Butuanons. We are making a sacrifice for change. We are contemplating a life of peace, justice and environmental renewal in our city.”

There are testimonies on the healing of the sick which are being documented by Anna Alvarez, a close-in adviser of the healing priest Fernando Suarez.  There are also stories of families being “renewed” in the wake of the Good Friday climb.

Then there is also the healing of the very mountain itself.

Says barangay captain Bao with a smile, “We never expected that so many Butuanons would come up here to our mountain barangay. All these years, we have been the source of 75 percent of the vegetables sold in the city. And we are the watershed area that ensures that the city has fresh drinking water. But it has only been through the Holy Week panaad that our fellow Butuanons have come to visit us. And so we welcome them with all sorts of kakanin and guinatan and fresh buko juice and native chicken eggs.

“These days, we are happy to note that we now have electricity and a covered court and the road is being cemented and other signs of progress can be witnessed in our place, thanks to our becoming a pilgrimage destination.”

Other Butuanons have joined tree-planting sessions here organized by such institutions as the Father Saturnino Urios University, greening the landscape with narra, acacia manguim and magkuno, among others.

As it turns out, this Holy Week destination is fast becoming a must-visit getaway beyond the season of Lent. And did we mention the icy springs and waterfalls and, yes, the better-than-Baguio nippy air?

For details about next week’s Panaad, or Stations of the Cross, on Good Friday, please get in touch with Suzette Maceda at 0909-4028115.