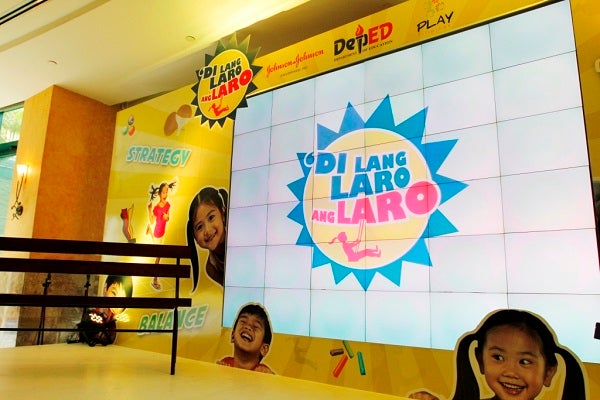 Rediscovering the power of play

MANILA, Philippines – There’s more to play than fun and games, according to a joint campaign that seeks to promote one hour of daily active play for the healthy and holistic development of children.

“Di Lang Laro Ang Laro”, a collaboration among the Department of Education, Play Pilipinas and Johnson and Johnson Philippines, is aligned with UNICEF’s Early Childhood Care and Development (ECCD) program, which advocates learning through play in education centers throughout the Philippines for children, as well as with the World Health Organization’s recommendation that children between the ages of 5 and 17 should have at least 60 minutes of physical play daily for proper physical and mental development.

This campaign also responds to a need surfaced by a study commissioned by Johnson & Johnson Philippines where mothers with four to nine year old kids in the Greater Manila Area acknowledged that while they would know the value of daily physical activity for their kids, they inadvertently end up encouraging study time while discouraging play time.

Play Pilipinas, a local NGO dedicated to promoting children’s rights to play, conducted a “Rediscovery” workshop where the guests were able to experience playing the games they used to play when they were growing up. This was followed by a short processing, which helped the guests remember the value of play in their own development. “We only have to look back to our childhood days to be convinced of how free play is a learning tool, helping us discover our capacities,” said Sigrid Perez, Executive Director of Play Pilipinas.

Representatives from the main partners also gave their own insights on the importance of play.  “We at the Department of Education support this advocacy because we believe that children can also learn skills and values outside the classroom,” said Atty. Tonisito Umali, Assistant Secretary for Legislative Affairs of the Department of Education, in his video message to the guests.

Songwriter and singer Barbie Almalbis-Honasan also says that she considers it important for her child to learn communicating with others through play. “I noticed that they easily make new friends on the playground, especially when they are with children around their age. From there, they get really creative and come up with their own games and make up their own rules.”

The February 20 launch at the Rockwell Grove was hosted by Luisito “Bodjie” Pascua, popularly known as “Kuya Bodjie” from the iconic children’s show that triggered early memories of play among the guests. Fellow advocate, Barbie Almabis serenaded the guests with her rendition of the classic APO Hiking Society song, “Bawat Bata.” It was also the first time that the campaign’s advocacy TVC, which features Bro. Armin Luistro, was shown to the public.

The guests were also informed about the campaign’s sustaining activities, part of which is the 365 Days of Play game where parents and children are encouraged to submit their own active play games. Chosen entries will be posted on the Johnson’s Baby Facebook page, facebook.com/johnsonsbabyphilippines.

“We at Johnson and Johnson commit to sustaining this advocacy. Together with Play Pilipinas, we are building “Palarujuan” as a reminder that play has huge benefits on our children’s development,” said Sean Zantua, HR and CSR Director of Johnson and Johnson Philippines. “We also invite our guests and their children to submit their entries for the 365 Days of Play game.”

“In promoting the role of play in children’s health and development, we also hope that even we adults can pick up a thing or two about play,” said Trina Almario-Tanlapco, Group Brand Manager of Johnson and Johnson Philippines. “Far from being idle time, play has the power to make our kids more creative, social, strong, smart and more. Easy-access playgrounds like ‘Palarujuan,’ are there for kids and parents alike to rediscover for themselves the power of play.  A daily dose is good for everyone.”