After 50 years, still living happily ever after | Inquirer Lifestyle 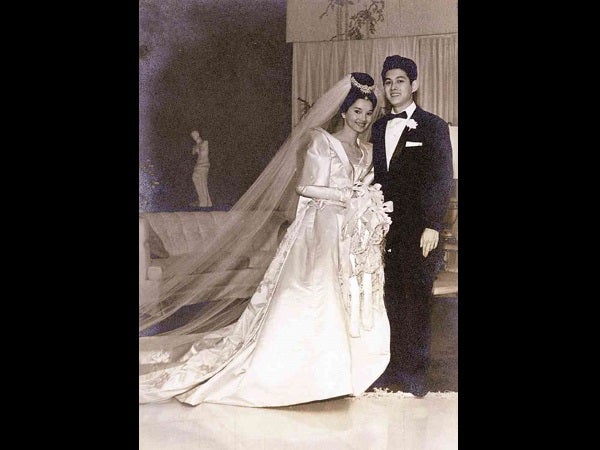 After 50 years, still living happily ever after

In these times of total “transparency”—when warring couples  wash their dirty linen in public by pressing charges against each other—cynics would consider  the happy marriage of Ernest Rufino and Josie Padilla  an anachronism.

That’s on one hand. On the other hand, romantics (and there are more of them) would heave a sigh of relief and say that they are certainly glad  there are still couples like Ernest and Josie, who have remained faithful to each other through the years.

The two recently celebrated their golden anniversary at the Santuario de San Antonio church in Forbes Park, renewing the vows that they made half a century ago on March 23, 1963.

In the late ’50s and early ’60s, Ernest Rufino and Josie Padilla were considered “hot copy” by Manila’s society editors. Ernest was the country’s “prize catch,” with his pedigree as the scion of one of the country’s old rich families, his cute and boyish demeanor, and his MBA degree from Harvard.

Josie was the poster girl of the late ’50s, who defined her era. She was a bright student, a teenager who had hordes of suitors and secret admirers from La Salle and Ateneo, and a pretty model who graced magazine covers.

Young girls copied her signature “French twist” hairdo with full bangs parted in the middle, and her Pitoy Moreno balloon dresses with layers and layers of petticoats that accentuated her 23-inch waistline.

Of their marriage, everybody said it was a match made in heaven. Society editors wrote reams of commentaries on what they billed “the wedding of the decade.”

A legacy of longevity

Josie now notes that she and Ernest come from families that have been blessed with longevity, not only in terms of life spans, but also in terms of enduring relationships. Both her parents (the late senator Ambrosio Padilla and socialite/civic leader Lily de las Alas) and her in-laws (the late business magnate Ernesto Rufino Sr. and philanthropist Elvira Baltazar) lived long enough to celebrate their golden anniversaries.

Josie reveals that her mother, before Josie’s wedding, had let her in on one of her “secrets.”  One of the habits that she wanted to pass on to her daughter was for her to wake up before her husband, to make sure she had enough time to take a shower, so that when her husband woke up, she would already be looking good and smelling good.

Josie confides with a chuckle, “I never followed my mom’s advice, because I’m not as vain and as energetic as she is. I prefer just waking up late and snuggling up to my husband in my pretty floral-print nightgown, beneath our cool, freshly laundered bed sheets on a lazy weekend morning.”

When asked if there is a template for a happy and enduring marriage, Josie categorically answers that there is none.  “Different people have different expectations of married life. What works for one couple may not necessarily work for another. The secret is to have a heart-to-heart talk before getting married, so each one has a clear idea of what the other wants.

“For instance, I have a beautiful friend who seemed to have a perfect marriage. Everyone was shocked when she and her husband split up. My friend explained to me what had gone wrong—she found out too late that her husband had wanted her to do nothing but spend his money, splurging on a fabulous wardrobe, pampering herself in the salon, and maintaining her youthful looks through costly rejuvenation products and high-tech cosmetic treatments, so she could go out at night with him, looking all beautiful and glamorous, so he could show her off to his friends.

“She confided to me that this was not at all the life she had envisioned for herself.  ‘All I ever wanted was just to cuddle up to my husband at night, in my pajamas, while we watched TV in the privacy of our bedroom.’”

Josie points out that this is clearly the case of a man and a woman who each had different expectations of married life, but failed to communicate these to each other.

Josie points out that sometimes the conflict occurs not because of fundamental differences in outlook, as in the marriage of her friend, but from problems which may arise from what many consider trivial, such as sleeping habits.

Josie cites the experience of a couple who decided to call off their wedding, simply because they could not settle on a mutually satisfactory arrangement: The prospective groom could not sleep without air-con, while his fiancée preferred natural ventilation.

It’s a good thing they finally hit on a compromise, and they got together again after a couple of years, deciding to push through with their marriage.

In her case, Josie said that Ernest had a very clear idea of the marriage he wanted. He told me simply, “I would like you to be home whenever I’m home.”

This statement would surely elicit a lot of eyebrow-raising among today’s hard-core feminists, but Ernest and Josie Rufino have proven that it’s doable, and has actually worked for them.

Josie maintains that they have religiously observed this arrangement for the past 50 years. Both have planned their activities in such a way that they can be home for dinner.

Even if Ernest still works (he is consultant at First Philippine Holdings, the holding company of the Lopez enterprises), he schedules all his business meetings during the day. Josie also restricts her staff conferences to daytime functions, so that these do not interfere with family dinners.

Many people do not know that Josie has been managing their family concerns as well as a health maintenance organization known as HMI over the last two decades, after being a stay-at-home wife for 25 years and raising a family of seven.

Contrary to popular perception, Josie also has a world of her own, and has not let herself stagnate by making her whole universe revolve around her husband.

Ernest and Josie have “bosom buddies” from different groups, whom they consider their “nearest and dearest” outside the family circle. Among them are their friends from the Order of Malta, a 900-year-old religious organization founded to help pilgrims during the Crusades.

Their members’ objective in the modern world is to defend the faith, and to help the poor and the sick. Ernest is the president of this organization in the Philippines, while Josie is an active member. As a knight and dame of Malta, Ernest and Josie support the distribution of relief goods during disasters, and attend daily Mass as well as monthly spiritual formation seminars.

Like any other couple, Ernest and Josie have had their share of tribulations. Their biggest trial came a few weeks before their silver anniversary in 1988. Ernest had been suffering from agonizing headaches and was having difficulty talking, until he was unable to speak altogether.

After rushing him to Makati Medical Center, Josie found out that he was suffering from an aneurysm in the brain that had “leaked,” and an AVM (arteriovenous malformation). Ernest immediately underwent surgery in the US, and with God’s grace, survived the delicate procedure. Josie now confides that if his aneurysm had burst, as is the case with most people, she would have become a widow 25 years ago.

How do Josie and Ernest keep the flame burning? Josie says that they talk a lot and do things together. For instance, they have “rediscovered the joy of watching movies.”

Their children are free to join them. But often, Ernest and Josie find just the two of them going out on a date, as they used to during their courtship, but with  a big difference now—they are no longer chaperoned!

Josie says that she and Ernest have been truly blessed. They are spending their golden years watching their grandchildren (a total of 11 precocious kids), as they grow in grace and wisdom, and witnessing in their children’s lives their own legacy of a meaningful existence, built on a solid foundation of love and fidelity.