Stations of the Cross of a different kind in Mindanao Avenue, QC | Inquirer Lifestyle ❮ ❯ 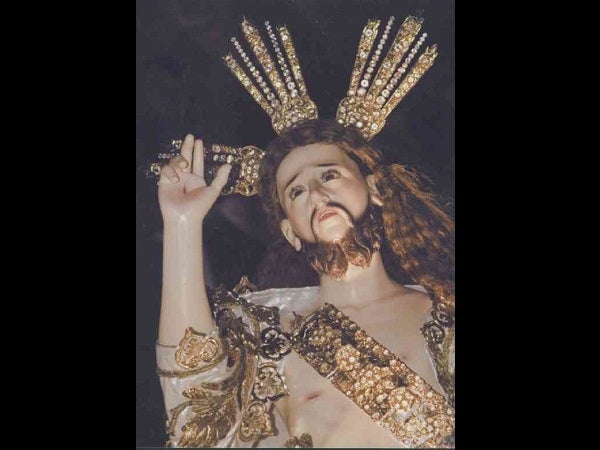 Stations of the Cross of a different kind in Mindanao Avenue, QC

Msgr. Romy Rañada, parish priest of Our Lady of the Annunciation in Mindanao Ave., Quezon City, is showing a different kind of Stations of the Cross—they focus on the “Hands of Jesus.”

Bicolano artist Pancho Piano has painted 14 Stations, each measuring 60 inches by 40 inches. “Jesus Carries His Cross” shows only the arm of Jesus.

During the fiesta celebration on Monday, the parishioners will surely marvel at this emotion-filled depiction of the Stations of the Cross.

Historian Antonio Pascual tells us that each year his family prepares to celebrate the “Salubong” of the Risen Christ.

The Pascual family, particularly Esperanza Pahati Pascual, is always in the thick of the preparations. She has assigned her son, Sonny Alvendia, to prepare the procession and the final meeting in the courtyard of San Jose de Navotas Parish.

As the church bells ring joyously and incessantly, the images of the Risen Christ and Our Lady come together.

Probably one of the most beautiful creations of the Baroque period in Spain is the centuries-old image of the Risen Christ paraded in the Navotas procession. The expressive facial features of the image are enough to make today’s faithful empathize with the Señor in His agony, and on to His glorious resurrection.

Resplendent in a gemstone-studded garment, the 5-ft-tall  image has a gold-plated sash over an immaculate white cape embroidered in gold. Three rays emanate from the Señor’s head, while His left hand clutches the banner of peace, the image of the paschal lamb emblazoned on it.

It is one of the precious heirlooms in the Philippines, brought over by the Pascual family from Spain.

In 1886, the last will and testament of Crisanta Gonzalez vda. de Pascual made mention of the statue of the Risen Christ or “El Señor Resucitado”—one of the items listed in the inventory of her possessions. (Doña Crisanta was the owner of friar lands in Navotas, purchased by her family from the Dominicans of the Colegio de Sto. Tomas.)

Doña Crisanta was the widow of Doroteo Pascual, son of Bernardo Pascual and grandson of Pedro Pascual and Clemencia Joseph, who in 1761, settled in San Jose, an enclave of mestizos in Navotas.

They were the first recorded ancestors of the Pascual clan of Navotas and later Orani, Bataan. Upon the death of Doroteo Pascual, his son Faustino Pascual, who lived in the ancestral “Bahay Castila” in Navotas, became custodian of the Risen Christ until his death in 1916.

Faustino’s son, Jose, mayor of Navotas from 1908 to 1916,  took over until 1920, when it was passed on to his sister, Francisca Pascual. Her daughter, Esperanza Pahati Alvendia, eventually acquired the image. The present custodian is her son, Amador Alvendia.

When one enters a Catholic church, one inevitably catches sight of the images of Our Lady of Lourdes, Our Lady of Fatima, St. Therese of the Little Flower, San Antonio de Padua and Padre Pio, among others. These saints have many devotees.

Adams Express Travel has focused its tours on the pilgrimage centers or shrines dedicated to these saints. There’s the popular Marian pilgrimage, or pilgrimage of Western Europe.

Then there is Our Lady of Guadalupe in Mexico, which paves the way for entry to the US. Adams Express Travel has pioneered in tours to these pilgrimage sites.