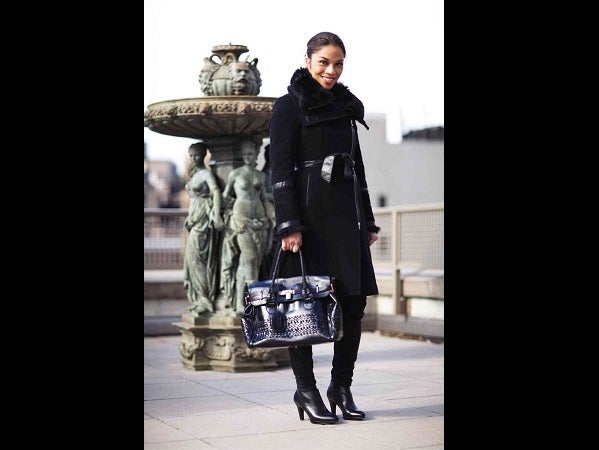 CARLA Sta. Cruz in New York donning one of her handbags

Marie Carla Sta. Cruz is a bag designer–or is she?

She seemed like a bright young thing. Studied at Parsons, designed three bag collections while there, and snagged an internship in Vogue.

But almost as soon as the profile on “bag designer” Marie Carla Sta. Cruz came out in our 2bU section earlier this month, her detractors began coming out of the woodwork.

Pictures of Sta. Cruz’s bags were uploaded on a tumblr account (fucknocarlastacruz.tumblr.com) and placed alongside those by established designers Alexander Wang and Philip Lim. Her other handbag designs, meanwhile, were shown top to bottom with those from a Shanghai-based supplier that sells cheap leather bags at wholesale prices.

In an e-mail interview with 2bU contributor Victoria Herrera, Sta. Cruz said that she had designed three accessory lines for her portfolio at Parsons, citing inspirations as disparate as thatched roofs, Rihanna and her “New York experience in fashion and the New York job market.”

At one point, she claimed to use horse hair because she was inspired by the popular HBO series, “Game of Thrones.” “I did a lot of embossing on cow leather to resemble python, to channel the erotically animalistic,” she said.

Herrera first met Sta. Cruz last October at a Yahoo event, and bumped into her several times after that first meeting.

“When she was introduced to me, we even had a conversation about New York and her interning in Vogue,” Herrera said.

A shoot was later scheduled at the INQUIRER office but the paper ended up using a photo of Sta. Cruz in New York to accompany Herrera’s article.

“We asked her questions about her stint in Vogue, designing, and living in New York, which she answered without flinching… she seemed really normal during our shoot,” Herrera said.

When Herrera asked Sta. Cruz who her mentor was in Vogue and what she learned from that person, however, Sta. Cruz gave no answer.

This odd combination of candor and sudden aloofness from Sta. Cruz was repeated in another interview, this time when this writer attempted to find out whether the accusations against her had any basis.

When we asked, via e-mail, about the striking similarities between her bags and those by Wang and Lim, she answered obtusely.

“The ones that looked like Alexander Wang or Philip Lim’s bags are no longer sold. It was merely an accident that they looked like that,” she wrote, adding that she was trying to cater to the specs of a potential client.

“I did design them and some were just the bags that some clients or friends wanted. When I started out, I just wanted to find any client who was willing to pay, so I did exactly what they wanted. Unfortunately, I was oblivious that it was similar to some other bags by Alexander Wang and Philip Lim,” she said.

The fact that she was unaware of the existing designs is odd, to say the least, given that she is supposed to be a bag designer who should be keeping abreast of what is already available.

“Fashion is my passion but Alexander Wang and Philip Lim are not my favorite designers. Unfortunately, I don’t know all the products that designers release—maybe I should,” Sta. Cruz said.

One thing she did admit is that “everything is outsourced now,” but that she will have things done in the Philippines when she gets back.

She might have sounded penitent, but Sta. Cruz should be aware by now that people will notice when images are lifted and used with abandon, and when one-of-a-kind designs are actually manufactured by the thousands.

While she admitted to outsourcing her bags in Vietnam and Shanghai, she claimed that “the factories I hired are selling overruns or rejects.”

This claim is truly vexing because Sta. Cruz—who is supposedly still a student at Parsons—implies that she had thousands (or hundreds) of a particular design made and that the factories are selling her rejects. Her bags, as seen on her Facebook page, are priced under P10,000 each.

“I tried reaching out to them (the suppliers), but unfortunately there are no fashion laws that will protect me,” she said.

Strange words coming from her. In another post on her Facebook page, she went into detail about how to make a leather cuff, but the picture she used to accompany her post is from the French luxury brand Hermés.

“I just Googled leather-making images and posted them on my site when I still had no followers. I wasn’t confident with my photography skills yet at that time so I posted a professional one.

“I got it from a site that was not Hermés at the time. I took the photo down because I was ignorant of all copyright laws and again I’m truly sorry for it. I will never make the same mistake again,” she said.

A second set of follow-up questions asking what her course was at Parsons and the inclusive dates of her internship in Vogue merited a reply that was at once aloof and dismissive.

“Please give me a chance to catch my breath and summarize and compile all of your questions. I am in between class and work now, and would really appreciate some more time in answering these,” she e-mailed back.

A quick online check of the list of current students at Parsons revealed no one named Carla Sta. Cruz, although she e-mailed this writer a screen cap of the school’s web page.

Her supposed stint at Vogue has yet to be confirmed, but the fact that she refuses to provide something as simple as the inclusive dates raises questions, to say the least.

Still, you’ve got to hand it to Sta. Cruz. In her e-mail interview with contributor Herrera, she advises young girls who would kill to have her job, “When they can’t find opportunities, they should create them.”

As she apparently has.