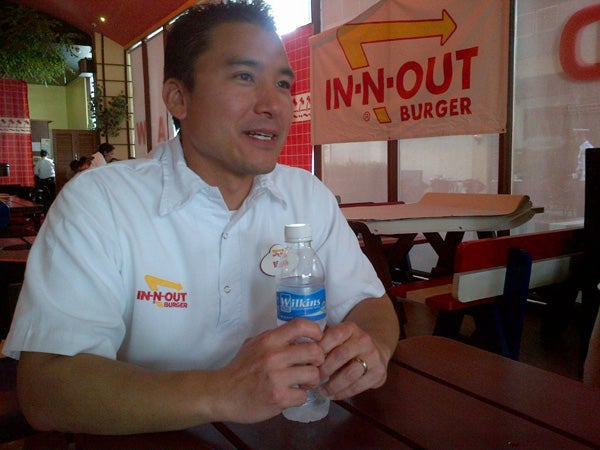 Brian Nakao, In-N-Out Burger's Manager for Special Foreign Events, has found a new love for Philippine food and culture during their visit in the country to test the local market.

MANILA, Philippines – A team of chefs and managers from the famous United States (US) fast food chain In-N-Out has found a new love for Philippine food and culture during their recent visit in the country to test the local market.

“Everybody in the Philippines is really nice, it’s crazy how nice everybody is here,” said Brian Nakao, In-N-Out Burger Manager of Special Foreign Events, in an interview with reporters after they temporarily set up shop in Claw Daddy’s restaurant in Bonifacio High Street and sold more than 200 burgers to hungry Filipinos who lined up for the one-time event.

In-N-Out Burger is a popular fast food chain of restaurants in the US with 281 locations in five states. It has been in the business for more than 60 years selling their menu of burgers, fries and drinks. In-N-Out Burger does not have shops in any Asian market yet.

They set up a temporary shop here in the country last March 21 Thursday with the help of Foodreel Inc, led by Ferdinand Avendano, to see how Filipinos would respond to their burgers.

Nakao, a full-blooded Japanese who grew up in the US, said that “a lot of customers today said that [the burgers] tasted exactly the same as [those] sold in the US, so that’s good, that’s what we wanted to hear.”

He has been working in the company for 20 years, during which he had worked as a store manager for nine years. During their event here in the Philippines, he was with two of their chefs, both have also worked as managers in the US.

When asked what makes In-N-Out’s burgers special compared to others, Nakao simply said that it’s the “good blend of ingredients in every bite.”

He explained that a primary concern in the making of their burgers is the freshness of the ingredients. So fresh that the morning before they opened their temporary shop, they went to the supermarket to buy tomatoes and other ingredients.

“There were not too many burger chains that do the fresh burger, it’s what worked in the US,” Nakao said.

“We just keep it simple, it’s been working for so long, were never going to change the way we do things,” he said. “We’ve been doing the same things since 1948, we’re very conservative in what we do [and] we don’t like to change the menu or do anything outside the box, we’ll continue doing that wherever we go.”

Nakao has been leading a three-member team around the world since 2011 setting up temporary shops in countries to find out how the local population would taste their burgers.

They have gone to China, Chile, Argentina, Brazil, Mexico, Canada, Ukraine, among others Nakao said.

“In most countries that we’ve been to they’ve been really friendly but I think here [in the Philippines there] is a little bit more than all the other places, it’s crazy how friendly everybody is,” he said.

“We can definitely find a lot of good workers here with the friendliness that you have … friendliness is a big part of what we do,” Nakao said.

Nakao has sampled the local cuisine on every country he has visited and he said that finds the diversity of Filipino food “fantastic.”

“I think there are few countries that are really food-countries and I think [in the Philippines] the culture is food-based. Everybody loves to eat [and] its crazy how diverse everything is here, the Filipino food is fantastic,” Nakao said.

“You can walk down the street and get anything you want, there [aren’t] a lot of countries [where] you can eat Indian food one day, Vietnamese food the next day, Chinese food, and just keep going every day,” he said.

Among the Filipino food that he has tasted was Tawilis, or Freshwater Sardinella, that is endemic to the Philippines and is unique throughout the world for being the only species of sardine known to live in freshwater.

He said that when he ate Tawilis, he consumed an entire plateful because he found it really good and delicious.

He said that he has also tasted sisig, a dish made from pork, lumpia or spring rolls, and Turon, banana slices rolled in spring roll wrapper and fried with brown sugar, despite not being a “big banana fan.”

“The good food that you guys create and make is something that you don’t find in other countries,” Nakao said.

Coming Back For More

Nakao said that one of his best friends in the US is a Filipino and that he will share his experiences during his stay in the country.

“When I get back [to the US] I’m going to talk to him and I’m going to be like, ‘man you guys are really friendly, it’s crazy!'” he said.

He also shared that he would like to visit Palawan because he saw the photos taken by one of his friends that went there.

“It looks really nice, one of these days maybe I can go there, it looks like a postcard,” Nakao said.

When asked whether he would recommend to his supervisors that In-N-Out Burgers establish a permanent outlet in the Philippines, Nakao said: “I will tell them, how busy we were, the friendly people and how the food culture here is.”

“I would say the Philippines is on my own personal list,” Nakao said.