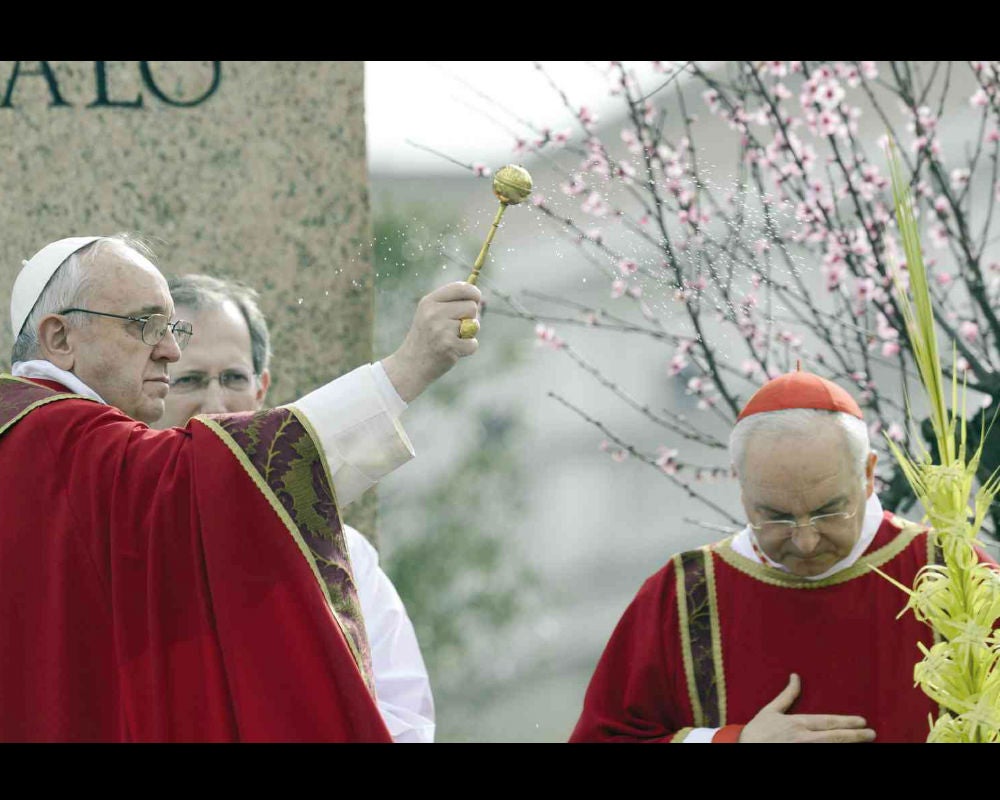 Be humble and young at heart, Pope urges

Pope Francis, celebrating his first Palm Sunday in Vatican City as leader of the Roman Catholic Church, called for personal conversion to check greed and social iniquity “that hit the weakest” and the poor.

Holy Week marks the suffering, crucifixion and resurrection of Christ.

Following through what appears to be the theme of his papacy, as shown by his adoption of a name based on St. Francis of Assisi, the Pope said that Christ was “not surrounded by symbols of power” but by wounds and suffering.

“Let us look around: How many wounds are inflicted upon humanity by evil; wars, violence, economic conflicts that hit the weakest; greed for money which no one can bring with him?” he said.

In his homily, Francis encouraged people to be humble and young at heart.

Recalling the triumphant welcome into Jerusalem, Francis said Jesus “awakened so many hopes in the heart, above all among humble, simple, poor, forgotten people, those who don’t matter in the eyes of the world.”

Francis told an off-the-cuff story from his childhood in Argentina. “My grandmother used to say, ‘children, burial shrouds don’t have pockets,’” he said, in a variation of “you can’t take it with you.”

Francis said Christian joy “isn’t born from possessing a lot of things but from having met” Jesus. That same joy should keep people young, he said.

“From 7 to 70, the heart doesn’t age” if one is inspired by Christian joy, said the 76-year-old Pontiff.

The Pope called for “joy and hope.” He said: “Do not be men and women of sadness. A Christian can never be sad! Never give way to discouragement!”

“Ours is not a joy that comes from having many possessions, but from having encountered Jesus,” he said.

The Pope also announced he would be going to Rio de Janeiro in Brazil in July to attend the World Youth Day, a jamboree of the Catholic youth.

Held every two years, the jamboree was started by John Paul II and continued by Benedict XVI, who renounced the papacy because of old age, leading to a papal conclave that elected Argentinian Archbishop Jorge Mario Bergoglio as Pope Francis on March 13.

Telling young people to carry the cross of Christ across all nations, the Pope said: “I, too, am setting out on a journey with you, from today, in the footsteps of Blessed John Paul II and Benedict XVI. We are already close to the next stage of this great pilgrimage of Christ’s Cross. I look forward joyfully to next July in Rio de Janeiro. I will see you in that great city in Brazil.”

The announcement was met by wild applause from some 100,000 people, many of them from the Pope’s home continent of South America.

The Pope urged the young people to prepare spiritually for World Youth Day “so that our gathering in Rio may be a sign of faith for the whole world.”

Before the Mass, the Pope blessed the olive and palm branches brought by the crowd that traditionally signify Palm Sunday.

At the end of Communion, some people thought the Pope would already end the Mass and cheered, “Viva Il Papa!”

Francis looked at the cheering crowd with disapproval since he still had to lead the traditional Angelus before concluding. Vatican ushers hushed that section of the crowd.

After the Mass, the Pope gave in to the wishes of the crowd and went around the square in his popemobile, acknowledging the cheers, blessing the crowd and kissing babies and the sick.

On Saturday, Francis met with Benedict and they gave each other a “moving embrace,” according to Fr. Frederick Lombardi, director of the Holy See Press Office.

The meeting was held at Castel de Gandolfo, the papal summer residence, were Benedict is staying while his retirement quarters in the Vatican are being prepared.

“It was a moment of great communion in the Church,” Lombardi said. “The spiritual union of these two people is truly a great gift and a promise of serenity for the Church.”

Benedict, 85, has been living at the papal retreat in Castel Gandolfo since he stepped down on Feb. 28 and became the first Pope to resign in 600 years.

From the moment he was elected, Francis, 76, made clear he would go visit him, refusing in a way to let Benedict remain “hidden from the world” as he had intended.

Wearing a white quilted jacket over his white cassock to guard against the spring chill, Benedict greeted Francis on the helipad of the Castel Gandolfo gardens. They embraced and clasped hands.

And in a series of gestures that followed, Benedict made clear that he considered Francis to be the Pope, while Francis made clear he considered his predecessor to be very much a revered brother and equal.

Traveling from the helipad to the palazzo, Benedict gave Francis the seat on the right-hand side of the car, the traditional place of the Pope, while Benedict sat on the left.

When they entered the chapel to pray, Benedict tried to direct Francis to the papal kneeler in the front, but Francis refused.

Taking Benedict’s hands and drawing him near, Francis said, “No, we are brothers.” The two used a longer kneeler in the pews and prayed side-by-side, the papal kneeler facing the altar left vacant.

It was a gesture that, 10 days into Francis’ papacy, is becoming routine: a shunning of the trappings of the papacy in favor of a collegial and simple style that harks back to his Jesuit roots and ministry in the slums of Buenos Aires.

Francis also brought a gift for Benedict, an icon of the Madonna.

“They told me it’s the Madonna of Humility,” Francis told Benedict. “Let me say one thing: When they told me that, I immediately thought of you, at the many marvelous examples of humility and gentleness that you gave us during your pontificate.”

The Vatican downplayed the remarkable reunion in keeping with Benedict’s desire to stay out of the spotlight so as not to interfere with his successor’s papacy. There was no live coverage by Vatican television, and only a short video and still photos were released after the meeting.

All of which led to speculation about what these two men in white might have said to one another. That the former Cardinal Jorge Mario Bergoglio was second only to Cardinal Joseph Ratzinger in the 2005 conclave that elected Ratzinger Pope—considered then to be the “anti-Ratzinger” candidate—only added to the popular imagination about what two men with such radically different styles, backgrounds and priorities might have chatted about over lunch.

Perhaps during their primo, or pasta course, they discussed the big issues facing the Church: the rise of secularism in the world, the drop in priestly vocations in Europe, the competition that the Catholic Church faces in Latin America and Africa from evangelical Pentecostal movements.

During their secondo, or second course of meat or fish, they may have discussed more pressing issues about Francis’ new job: Benedict left a host of unfinished business on Francis’ plate, including the outcome of a top-secret investigation into the leaks of papal documents last year that exposed corruption and mismanagement in the Vatican administration.

Benedict’s resignation—and his choices about his future—have raised the not-insignificant question of how the Catholic Church will deal with the novel situation of having one reigning and one retired Pope living side-by-side.

Before Benedict announced his decision to be known as “emeritus Pope” and “Your Holiness,” one of the Vatican’s leading canon lawyers, the Jesuit Rev. Gianfranco Ghirlanda, penned an article suggesting that such a title would be inappropriate for Benedict since in renouncing the papacy he had “lost all the power of primacy” conferred on him by his election.

The Vatican had originally said Benedict would likely be known as “emeritus bishop of Rome” precisely to avoid confusion with the new Pope.

But Benedict went ahead with the title and chose to keep wearing the white cassock of the papacy, albeit without the sash and cape worn by Francis, leading to questions about both his own influence on the future Pontiff and whether Catholics more favorable to his traditional style might try to undermine his successor’s authority and agenda by keeping their allegiance to the old Pope.

The historic meeting of Francis and Benedict had been highly anticipated since no situation has obtained in recent history of two Popes coexisting The last Pope to resign was Celestine IX in 1294. With a report from AP