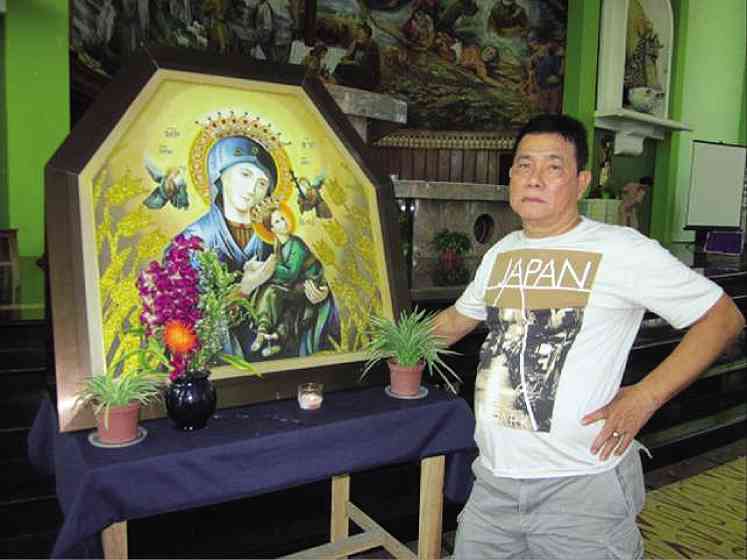 WITH Our Lady of Perpetual Help

In the  coastal town of Calauag, Quezon—roughly a six-hour drive south of Manila—at the St. Peter the Apostle parish church, you will find a huge mural (81 x 43 ft) that dramatizes highlights in the turbulent life of the first Pontiff.

The mural is by multi-awarded artist Paul Dimalanta, who also created the now famous Kamay ni Hesus shrine in Lucban, Quezon, and who is from Calauag.

You might say  St. Peter is in the news again, for the new Pope has chosen to call himself Francis I rather than, say, Peter II. This has not escaped the attention of Vatican writers, who have observed that no pope in history has dared to call himself thus. For no one can compare himself with the incomparable Peter the Rock.

Like St. Paul (with whom he was at loggerheads—they did not agree, for example, on circumcision), St. Peter attained greatness by rising above his errors (like thrice denying Christ).

The St. Peter the Apostle mural in Calauag was commissioned by the parish priest, Msgr. Ramon Tiama. He served as the main resource person for the artist, along with an illustrated Bible.

“I worked for two months on the project except  Sunday, which was our rest day,” recalled Dimalanta.

“Monsignor wanted to highlight special events in the life of St. Peter,” the artist said. “And he would suggest some changes.”

The big multicolor painting is in oil, with blue as the dominant color because of scenes showing the sky and the sea. We also have brown, amber, yellow-ochre and white.

The mural documents 11 events in the life of the saint. He is first shown imprisoned by King Herod and aided in his escape by an angel. As our eyes move to the right, we see him meeting with Jesus for the first time, and, with the other apostles, accompanying Him to Galilee where He performed His first miracle during the wedding at Cana.

In the biblical story of the great tempest at sea, the fearful disciples cry out to the Master: “Lord, save us, we are perishing.” And Jesus awakens, rebukes them for having little faith, and calms the waters.

The Gospel according to Luke recounts the story of Peter catching a large amount of fish, kneeling before the Lord, and being told by him that “from now on you will be a fisher of men.”

Jesus also walks on the water, and enters the disciple’s boat on Lake Genesareth to preach to the multitude on the shore (Luke 5:3).

Other scenes show Jesus washing the feet of Peter; the disciple receiving the famous command to “feed my lambs, tend my sheep”; denying Christ three times as the cock crows; repenting and weeping bitterly.

The last scene shows the future founder of the See of Rome being nailed to the cross upside down, as tradition says he requested, for he was not worthy to be crucified in the same manner as the Lord.

Msgr. Tiama, in an interview with the community newspaper, the Philippine Catholic Veritas, raved: “It is like seeing High Renaissance artworks of Michelangelo and appreciating Raphael’s illustration of Catholic Church doctrines.”