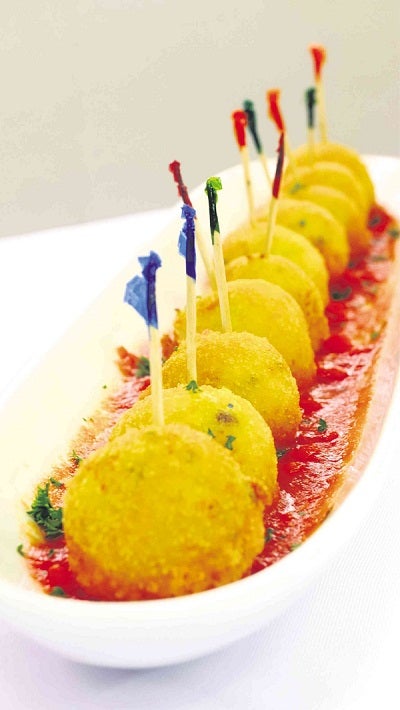 He has lived in the Philippines longer than he has lived in Spain. For 60 years, Anastacio de Alba, originally from the medieval city of Avila, has been cooking Spanish food for Filipinos.

After arriving in the Philippines in 1952 upon the invitation of Don Antonio Roxas, he started out as a chef in the old Casino Español. A work stint at Luneta Hotel followed soon, before he opened his first restaurant in 1954, the aptly named El Español. The opening of Alba Cocina Española in the tourist belt followed soon, and from then on there was no stopping the man who has since been nicknamed Colas by his numerous friends.

In the ensuing years, Alba’s restaurants underwent various reincarnations. La Parilla, Las Cuevas, Patio Flamenco, Alba Supper Club, Patio de Alba in Doña Narcisa Building, and Jardin de Alba in Greenhills all became known for the sumptuous cuisine served by the self-taught chef. Sometimes the food would be authentically Spanish; at other times they would be his adaptations of dishes he grew up with and dishes he adapted to Filipino taste.

Today Alba’s culinary domain covers four restaurants and a catering service. Already getting on in years, he has designated his son Miguel Angel as successor.

No stranger to the kitchen, Miguel Angel has for years observed his father’s skills and passion for cooking. Though he initially considered being a doctor or an accountant, he’s gladly following in his father’s footsteps.

A dish that’s just right for this Holy Week is the croquetas de bacalao, salted white cod rolled with mashed potatoes into appetizer-size balls. This dish is not only easy to prepare, it’s also versatile as it can be prepared with either salted or frozen cod, with lapu-lapu and even with canned tuna.

Water, for boiling the potatoes

If using dried bacalao, soak the bacalao in water for 24 hours, changing the water two to three times. This is to remove some of the saltiness from the bacalao. After 24 hours, drain the bacalao and remove the skin and bones.

If using frozen bacalao fillets, keep the bacalao in the refrigerator for several hours until it thaws, then clean well, making sure to remove the skin and bones.

Boil the potatoes in enough water to cover until tender.  Meanwhile, chop the bacalao.

When the potatoes are tender, mash them coarsely and mix them with the chopped bacalao, garlic, parsley, almonds and butter. Season to taste with white pepper and with salt if using frozen bacalao.

Form the mixture into balls then roll them in flour. Dip each ball into the beaten eggs, then dredge with bread crumbs.  Chill for one to two hours.

When ready to cook, heat the cooking oil in a deep-fryer and fry the croquetas in batches until golden brown. Serve with the sauce.

To make the sauce:

Heat the olive oil in a pan and sauté the garlic. Stir in pimientos and tomatoes and let simmer for six to eight minutes. If desired, add the basil leaves. Season to taste with salt and pepper.

Since the dried bacalao is already salty, there’s no need to add salt to the mixture. (Add salt only if using frozen bacalao.)

For frying the croquetas, chef Miguel says you can use vegetable, canola, palm or corn oil. However, olive oil is not suitable for deep frying as it tends to burn fast.

You can prepare the mixture and shape them into balls ahead of time. Store them in the refrigerator for up to one day. If storing for longer than one day, keep them in a tightly covered container in the freezer. You can then deep-fry the croquetas just before serving.

Likewise, you can prepare the sauce ahead of time. Reheat before serving.