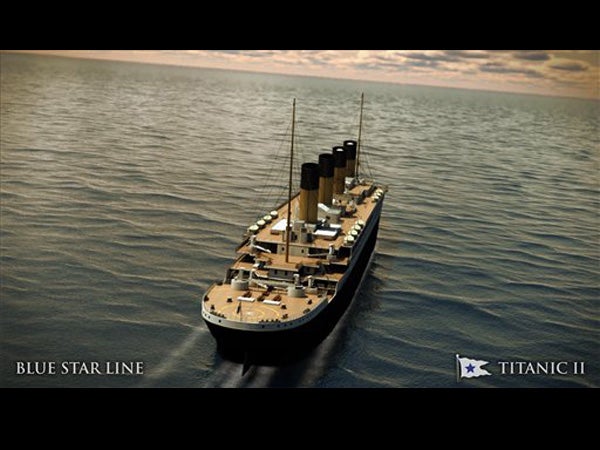 In this rendering provided by Blue Star Line, the Titanic II is shown cruising at sea. The ship, which Australian billionaire Clive Palmer is planning to build in China, is scheduled to sail in 2016. AP FILE PHOTO/BLUE STAR LINE

SYDNEY–An eccentric Australian mining magnate who is building a replica of the ill-fated Titanic on Saturday unveiled his latest scheme — a park of giant robotic dinosaurs.

Clive Palmer, who last month in New York launched an ambitious plan to build and sail the “Titanic II”, said he had ordered more than 100 life-size dinosaur robots from China to populate his north Australian resort.

He already has two of the towering creatures — named Jeff and Bones — on display at his Palmer Coolum Resort on the Sunshine coast north of Brisbane and boasted that the public “haven’t seen anything yet.”

The robots, some of which measure up to 7 meters  tall and weigh in excess of 1.2 tons, will move their tails and chests and blink their eyes. They are expected to arrive by the end of April.

A larger-than-life character who has made a fortune in mining, Palmer said recently that he was funding the Titanic II because “I want to spend the money I’ve got before I die”.