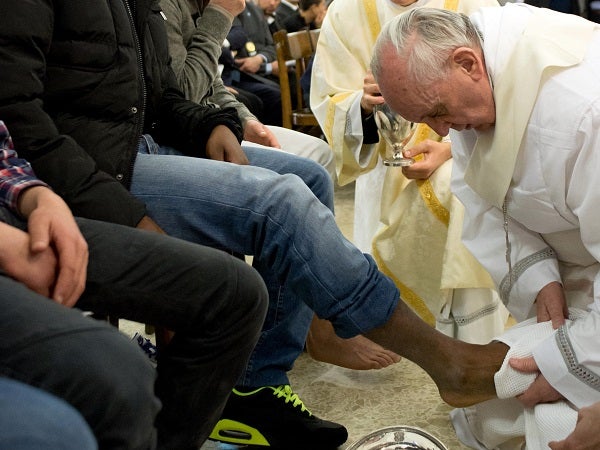 In this photo provided by the Vatican newspaper L'Osservatore Romano, Pope Francis washes the foot of an inmate at the juvenile detention center of Casal del Marmo, Rome, Thursday, March 28, 2013. Francis washed the feet of a dozen inmates at a juvenile detention center in a Holy Thursday ritual that he celebrated for years as archbishop and is continuing now that he is pope. Two of the 12 were young women, an unusual choice given that the rite re-enacts Jesus' washing of the feet of his male disciples. The Mass was held in the Casal del Marmo facility in Rome, where 46 young men and women currently are detained. Many of them are Gypsies or North African migrants, and the Vatican said the 12 selected for the rite weren't necessarily Catholic. AP/L'Osservatore Romano, ho

VATICAN—In an unprecedented move, Pope Francis washed the feet of 12 youths, including a Muslim girl, during the Last Supper Mass on Thursday in a correctional for minors in Rome. He was reenacting Jesus Christ’s washing of the feet of his all-male 12 apostles, including Saint Peter, the first Pope.

Earlier on Thursday, the Pope celebrated Holy Chrism Mass with some 2,000 priests based in Rome, including Filipino priests led by Fr. Gregory Ramon Gaston, rector of the Pontifice Collegio Filippino.

The Pope will hold today his first Easter Sunday Mass, during which he is expected to deliver the traditional papal address Urbi et Orbi (To the City and to the World) as well as send his Easter greetings in the major languages to all of the churches of the world.

The Pope washed the feet of 12 juveniles, 10 boys and two girls, detained at the Casal del Marmo Penitential Institute for Minors, where he celebrated the traditional “in Coena Domine”—the Lord’s Supper— Mass, the first of the Easter Triduum.

The Mass was closed to the press, although the Vatican press office said “around 50 boys and girls” attended.

Of the two girls washed by the Pope, one was Italian, the other, according to the press office, “an Eastern European.”

The institute’s chaplain, Fr. Gaetano Greco, a Franciscan tertiary Capuchin of Our Lady of Sorrows, later disclosed that the Eastern Europeakn girl was a Muslim Serbian. No pope in history had washed the feet of a woman, much less those of a Muslim.

In his homily, the Pope made no reference to the religious beliefs of the young offenders, saying that he washed their feet to follow the example of Jesus Christ.

“This is the Lord’s example,” the Pope said. “He is the most important one and He washes [other’s] feet because those who are the highest among us must be at the service of others. Washing someone’s feet is [saying], ‘I am at your service.’”

Father Greco explained, “There is no better way to show his service for the smallest, for the least fortunate.”

The visit of the detention center followed through with action on what Pope Francis had indicated would be the theme of his papacy—helping the poor and the lowly.

Pope Francis was elected in the papal conclave of March 13 after Pope Benedict XVI stepped down last Feb 28 due to old age.

The Pope, who was formerly Cardinal Jorge Mario Bergoglio, the archbishop of Buenos Aires, Argentina, said he took “Francis” as papal name after Saint Francis of Asissi, the founder of the Order of Friar Minors, or the Franciscans, who led the mendicant movement of friars along with St Dominic de Guzman and the Dominicans, to reform the medieval Church.

Saint Francis kissed the sores of lepers in order to show them that Jesus Christ cared for them. He also went to the Middle East during the Crusades in order to convert Muslims to Christianity.

At the Holy Chrism Mass on Thursday, the Pope reiterated his message of reform and urged priests “to go out of themselves” and reach out to others.

He  warned Catholic priests that “the reason why some priests grow dissatisfied, lose heart and become in some sense collectors of antiques or novelties” was that they seldom went out of themselves, an isolation that led to “missing out on the best of our people.”

Smell of their sheep

Pope Francis urged priests to be “shepherds who have the smell of their sheep.”

The Chrism Mass is traditionally celebrated in all the churches and cathedrals throughout the world on Holy Week, in which priests renew the vows of poverty, chastity and obedience that they made at their ordination.

The Mass also blesses oils used in Catholic rituals such as anointing catechumens and the sick. Also blessed is the chrism oil—olive oil scented with balsam—used to anoint those being baptized, confirmed, or receiving Holy Orders.

The Pope in fact reminded priests that the Holy Chrism Mass was a reminder of their ordination and their duty to serve others as part of their priestly or “anointed” ministry.

“When we put on our simple chasuble (an outer ecclesiastical vestment),” he said, “it might well make us feel, upon our shoulders and in our hearts, the burdens and the faces of our faithful people, our saints and martyrs, of which we have so many in our times.”

The Pope also noted how “the beauty of all these liturgical things … is not so much about trappings and fine fabrics” as it was a symbol of the action expected of priests. “The ointment, dear brothers, is not intended just to make us fragrant, much less to be kept in a jar, for then it would become rancid … and the heart bitter.”

For many of the 2,000 priests based in Rome, either members of its archdiocese or working or studying there, it was the first time for them to celebrate Mass with the Pope, much less meet him.

Filipino priest Fr. Joseph Tan of the Archdiocese of Cebu said the experience was “awesome.”

“I will be 22 years in the priesthood this year, so making the renewal of promise together with so many other priests and before the Pope is totally awesome,” said Father Tan, who’s taking up higher communication studies at Santa Croce and staying at the Pontifice Collegio Filippino, where Filipino priests studying in Roman pontifical institutes are mostly boarded.

Also on Thursday, the Pope made his first appointment of a bishop, naming Mario Poli, 66, to succeed him as archbishop of Buenos Aires. Formerly bishop of Santa Rosa, Poli is head of the Argentine Church’s Episcopal Commission for Catechesis and Biblical Ministry.

Pope Francis also approved his first batch of people to be put on the path to sainthood. Approved for beatification were 63 people, mostly martyrs of the Spanish Civil War, Nazism and Communism.

The biggest batch comes from the religious persecution in Spain (1934, 1936-39) that triggered the civil war, mostly Franciscan Capuchins, Labourer Sacred Heart priests, and the bishop and diocesan priests of Avila, Spain.

Also to be beatified are Salesians killed during the Nazi German occupation of Italy, and a Dominican biblical scholar killed by the Nazis in Dachau, Germany.

Also to be beatified are martyrs killed in Communist Eastern Europe.

On Good Friday, Francis Francis recited the Passion of Christ—the story of the last hours of Jesus’s life—in St. Peter’s Basilica and later presided over the Via Crucis, or Way of the Cross, at the ancient Roman Coliseum, where thousands of Christians are believed to have been martyred in Roman times.