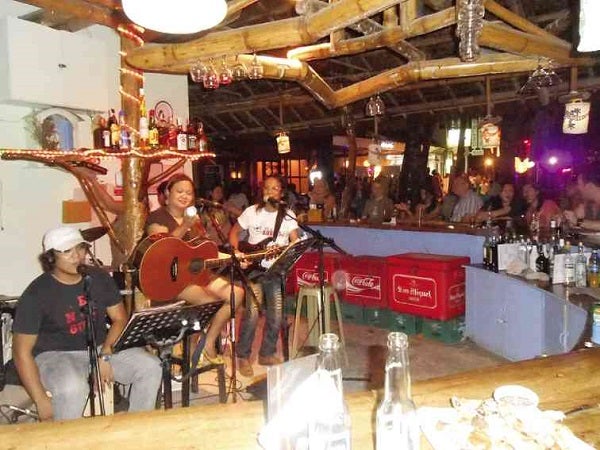 BORACAY ISLAND —The kaleidoscope burst of orange, yellow and blue hues in the sky at sunset signals the start of happy hour in this tourist mecca.

We are having our first drink of San Mig Light at Discovery Shores, a high-end resort hotel at Station 1, when magazine editor Raul Manzano cajoles us to join his ABS-CBN colleagues who are holding a “beach slumber party” at Whitehouse hotel nearby. Turns out that it’s Cinema One’s annual film screening, now on its eighth year in Boracay.

While event host John Lapus warms up the sizeable crowd, we decide to sneak out since we don’t feel like watching the featured movie, “Sisterakas.”

Loud dance music greets us as we walk towards Station 2. A private wedding reception is in progress on the beach, the guests flailing their arms and having a good time. The party scene sets the mood for what we’ll see in the next couple of hours.

Much has changed in Boracay since our last visit two years ago. More hotels, bars, restaurants and shops have sprung up along White Beach, the center of nightlife where foot traffic gets so heavy that we have to stop every so often to avoid bumping into the horde of local and foreign tourists who, like us, are eager to see what’s going on here.

Moments later we imagine we are in a local version of the Sunset Strip in Hollywood, or, closer to home, Ermita in its heyday in the ’80s. In our mind, the chugging beat of Chuck Berry’s “Roll Over Beethoven” plays on as we look for a club with a live gig.

Acoustic pop-rock, with the proverbial reggae show, rules in Boracay these days, with local acts—mostly duos or solo—playing covers of past and current Billboard hits. Most clubs like Bucos Bar & Grill set up chairs (some with sofas) and tables right on the beach, with the sea behind the performer.

But there are other places, like Cocomangas, that resemble the typical bar where customers prefer listening to recorded music while nursing their beer.

As we amble on we find a couple of dance clubs, one of which is Epic, where a cover charge of P300 comes with a free drink. The place is full, and we remember Freida Dario— one of Manila’s residents who have settled in Boracay and whom we met earlier at Discovery—will be coming here.

But we decide to keep walking to check out what’s new and exciting on this 4-km stretch of the finest white-sand beach in the country, recently voted as the top Asian tourist destination by an online poll.

Fire dancers, mostly gay performers, are likewise a hit here, and they strut their stuff alongside the live acoustic acts. The smell of kerosene from the fire dancers assaults us, so we keep walking.

The row of bars and clubs playing different sounds next to each other reminds us of another tourist attraction, Magsaysay Boulevard in Olongapo near the old US naval base. That’s a rather sleazy image, but the comparison is not far off the mark when a hooker (who looks like a tranny) crosses our path while swearing loudly that a prospective client, a Caucasian guy, was not interested.

Yet those who want privacy and would rather dine and talk won’t feel out of place, because there are restaurants like Mesa and Caffe Caruso that stand out for their classy ambiance.

We are surprised to find that Starbucks and McDonald’s have opened in Boracay as well, plus Yellow Cab, Dulcinea, Sbarro, among other casual-dining outlets.

Wellness salons have also set up shop, like one named Island Foot Spa.

Winding our way back to Station 1, we just opt for beer in a convenience store since all live music stops at midnight. “Can I drink this outside?” we ask the store attendant. “Yes, but not on the beach near the water,” she replies.

True enough, cops don’t mind us as we take swigs while taking in the sights and sounds.

At past 11 p.m. some of the restaurants get ready to close for the night. Business looks rather slow for a few of them on this day.

We feel glad to spot Kasbah, the Moroccan restaurant which features the quirky and talented musician Noli Aurillo as a live acoustic act. But he’s not here now… maybe next month or so, says one of the resto staff, who points to a sign near the door announcing the scheduled performer on Sundays: a belly dancer.

Today being Easter Sunday, we expect Boracay to be bursting at the seams with holiday revelry.